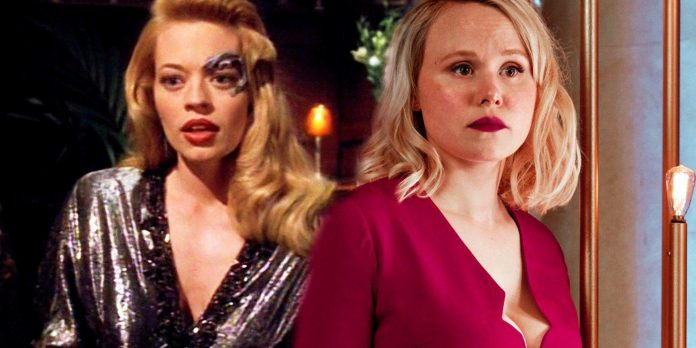 SPOILERS for Star Trek: Picard Season 2 are below.

With a cast consisting of seasoned Broadway actors and professional singers, the Star Trek franchise subsequently entertained various musical interludes that serve both the purpose of character development and distinctive entertainment. Recently, in the second season of the series “Picard,” Alison Pill presented a stage to showcase her singing talents with a powerful rendition of “Shadows of the Night.” Picard continues the Star Trek tradition of adding musicality to his storytelling, reminiscent of his predecessors, so here we explore the musical episodes in the franchise.

From Nichelle Nichols to Alison Pill, there were a huge number of experienced singers in each “Star Trek” line-up. Star Trek: The Original Series probably popularized the phenomenon of including musical moments in the franchise because of the appeal of the 1960s, when singers or band members were hired as guest stars and extras so that a popular song could be created, for example, a motley group from “The Way to Eden”. Among the professional singers of the franchise are Robert Picardo, Nana Visitor, Brent Spiner and James Darren. Music is an important element of “Star Trek” and has served as a source of inspiration for every part, including the most recent series “Picard”, where Alison Pill pays homage to these interludes. Trek: Voyager, season 4, episode 18 “The Killing Game”.

The musical episodes in “Star Trek” distinguish it from most sci-fi objects, adding an enthusiastic and completely playful atmosphere to the universe. While war and chaos reign in space, these songs highlight the franchise’s ability to focus on light in darkness and the optimism that its concept embodies. The performances are invariably charismatic, bright and creative, which adds seriousness to the track. In general, the humanity of the universe is what Star Trek is trying to extract, and remains as strong as ever in these scenes. Music, in particular, conveys this moment in the franchise.

“Uhura’s Song” is first heard in TOS Season 1 episode 2, “Charlie X”, when a communications officer sings along to Spock playing his instrument. This is Uhura’s first standout moment in the series and perhaps one of her character’s most memorable moments. It is sung by Nichelle Nichols herself, who later put this song on her album Down To Earth, which contains covers such as “Feelin’ Good” or “That’s Life”. Before taking on the role of Uhura, Nichols performed with the legendary Duke Ellington. The purpose of the song in “Star Trek” is to show Uhura’s sociable and sociable personality. She is a good influence on her friends and teammates, as shown during her song when she playfully encourages Spock to play longer and join in the fun. This song became an important catalyst for various musical interludes in the franchise.

Leonard Nimoy was a prolific singer in the 1960s and 1970s, recording 5 studio albums in his time. Unsurprisingly, Spock is given a moment to shine with his unique angelic voice. In the 10th episode of the 2nd season of TOS, “Plato’s Adopted Children”, Spock is forced to sing “Maiden Wine” with the help of mind control. Nimoy wrote the song for this episode himself, and it can be found with the second verse on his 1969 album The Touch of Leonard Nimoy. Although Nimoy is best known for his upbeat Lord of the Rings-themed song “The Ballad of Bilbo Baggins,” he is an accomplished singer who can lay claim to an extensive collection of music. “Maiden Wine” flaunts Spock’s inner conflict. He is forced to show emotions, which is a human flaw that he has avoided all his life. The song is a continuation of his pain regarding mind control and its consequences.

In the third installment of the Star Trek TNG sequel films, Star Trek: Insurrection, Picard and Worf begin singing “British Tar” over their ship’s communications to distract Data from his dangerous case of malfunction. The song is from the comic opera H.M.S. Apron and was written by the duo of lyricists Gilbert and Sullivan in the 19th century. Picard’s choice of song is in keeping with the character, as he and Data at TNG share a mutual interest in Shakespeare and, presumably, pre-20th century culture. Several TNG actors know how to sing professionally, including the experienced Broadway Brent Spiner, so this short scene of levity in “Star Trek: Uprising” creates a fun and long-lasting atmosphere with a harmony of strong voices.

Having performed in the popular musical “Chicago” on Broadway, Nana Visitor fascinates the audience with her musical interlude Fever in DS9. In the 20th episode of the 6th season “His Way” of the TV series “Deep Space 9”, Lola Crystal, a holographic copy of Kira, sings her sultry version of Odo’s song.

Jamie Foxx Reveals What Happened After He Messed Up Spider-Man: no...