Home Entertainment Explanation of every Magic user in DCEU (including Black Adam from The... 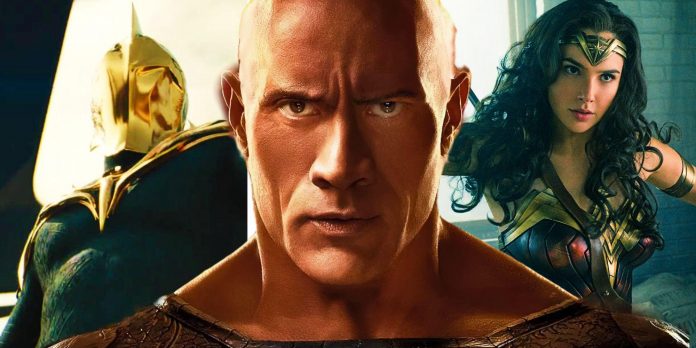 The DCEU started with a sense of realism inherited from Nolan’s Dark Knight trilogy, but the franchise quickly opened its doors for magic. The DC universe in the comic books always involved more than just aliens and metahumans, and it would not take long before a magic user appeared in the DCEU. Still, Wonder Woman and Shazam ended up becoming the only two anchors for the magic side of the DCEU, but that is about to change as names like Black Adam and Doctor Fate are also arriving.

Given how DCEU canon after Justice League is still up in the air, with The Flash expected to reboot some aspects of the saga, it is hard to establish universal rules for how magic works and will continue to work in future DC movies. That said, confusing magic rules are not exclusive to the DCEU. In the MCU, between releases like WandaVision, Moon Knight, and Doctor Strange in the Multiverse of Madness, keeping track of what the rules of magic are is difficult.

From Wonder Woman to Black Adam, the DCEU has seen several magic beings. While the magic nature of some of those characters was not always in the spotlight, others are deeply involved in the magic lore of the DC universe. Here is a breakdown of every magic user in the DCEU.

Although Man of Steel tried to keep a sense of realism, at least as much as a Superman movie could have, Batman v Superman: Dawn of Justice opened the doors of the newly formed DCEU to the fantastic, magic side of the DC universe. While the DCEU’s Superman skills could be explained with a sci-fi element, Wonder Woman’s origins and powers were intrinsically linked with gods and magic. Gal Gadot’s Wonder Woman origin story would not be told until Wonder Woman (2017), but Batman v Superman had already established her powers as something neither Batman’s intel nor Superman’s alien background could explain. It was later revealed in Wonder Woman that Diana was born of Queen Hipolita and Zeus, a similar origin story to the one from DC’s New 52 reboot. Wonder Woman also reveals that it was Zeus who created the Amazons and hid Themyscira right before dying. The Wonder Woman character continued to be involved with magic in Wonder Woman 1984, which saw the wishing stone that corrupted Maxwell Lord as the driving element of the plot.

Despite already being much stronger than the regular human after thousands of years of living underwater, some Atlanteans are also trained in magic. That includes Justice League and Aquaman’s Mera of Xebel, who is capable of bending water due to her magic training. Mera’s powers involve hydrokinesis, both underwater and on the surface, as well as the ability to solidify water into constructs. In Zack Snyder’s Justice League, Mera’s water bending skills go as far as being able to drain the blood out of Steppenwolf’s face.

The DCEU took another major step into adding the mystical side of the DC Comics with Shazam. The 2017 DC movie told the origin story of Billy Batson, including his first meeting with The Wizard. The original Shazam was one of seven wizards who formed the Council of Wizards and existed in a different plane known as the Rock of Eternity. Although not much is seen from The Wizard in Shazam, the character is extremely powerful, and only died at a very old age after transferring his powers to Billy Batson.

After Black Adam and before Shazam, The Wizard had picked another potential champion, Thaddeus Sivana. The Wizard summoned Sivana when the future scientist was still a child but gave up on offering him the Shazam role after noticing how easily Sivana could be corrupted. Ironically, that is what set the Shazam villain on a path of evil. Sivana’s powers include energy manipulation, flight, super strength, and the ability to summon any of the Seven Deadly Sins.

Unlike Black Adam or Sivana, Billy Batson proved to be the right choice to become The Wizard’s champion. He was granted the power to achieve his full potential, meaning that he could become an adult with magic skills by saying the word “Shazam.” When in Shazam mode, Billy Batson’s powers include the wisdom of Solomon, the strength of Hercules, the courage of Achilles, the stamina of Atlas, the speed of Mercury, and the power of Zeus.

Billy Batson was able to share his powers with his siblings for the final battle against Sivana and the Seven Deadly Sins. As such, Freddy, Mary, Eugene, Pedro, and Darla became heroes of their own to form the Shazam Family. Their powers are very similar to Shazam’s, including super strength, super speed, and flight.

Related: How A Shazam Joke Creates An MCU Canon Problem For The DCEU

The Rock’s Black Adam will only make his DCEU debut in the Black Adam movie, but the origins of the character have already been set up in Shazam. Black Adam failed the Wizard by freeing the Seven Deadly Sins after witnessing the murder of his family, causing the death of millions and leading to his imprisonment. As seen in the Black Adam trailer, The Rock’s character was eventually freed from his imprisonment, waking up full of anger in a world that did him wrong. Similar to Shazam, Black Adam’s power involves super strength, flight, super speed, and the ability to throw lightning bolts.

Doctor Fate is one of DC’s most powerful characters and one of the pillars of the magic side of the DC universe. Fate is now about to make his DCEU debut as part of the Justice Society in Black Adam, in which the Kent Nelson version of the character will be played by Pierce Brosnan. Not much has been seen of Doctor Fate’s powers in the DCEU except for astral projection and the ability to see the future, but, in the comics, Fate is an agent of the Lords of Order with an almost unlimited set of abilities.

Will Constantine And Zatanna Join The DCEU?

Constantine and Zatanna are perhaps the two most recognizable names when it comes to the magic side of DC Comics, and yet none of them has been featured in the DCEU. That said, there are multiple projects in development involving Constantine and Zatanna. J.J. Abrams is producing a Justice League Dark universe for HBO Max, one that will include a Constantine TV show. A Zatanna movie is also in development, with Promising Young Woman director Emerald Fennell set to write. All of the said projects have been in development for a while, and it is still not possible to say how they will connect with the DCEU.

Ms. Marvel Unfolds Her Teenage Fantasy In Her First Trailer With...