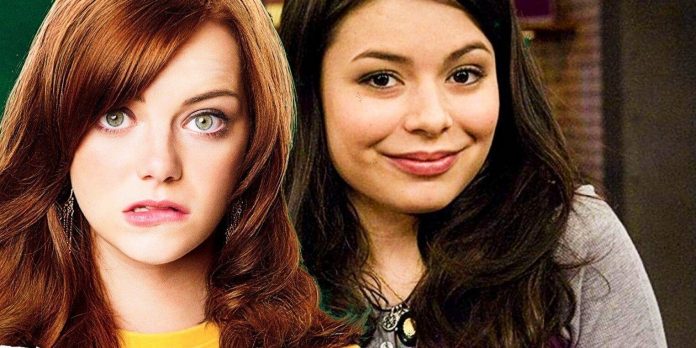 In the final season of iCarly there was an interesting cameo by an unexpected actress — Emma Stone. iCarly, a Nickelodeon youth sitcom that ran for six seasons from 2007 to 2012 and was then rebooted on Paramount+ in 2021, focused on the adventures of Carly Shay (Miranda Cosgrove), Freddie Benson (Nathan Kress) and Sam Puckett (Jennette McCurdy). they balance their ordinary teenage life with the fame that the creation of a popular web show brings. Throughout the show, they encounter colorful characters, including the role that Emma Stone played in one of the episodes.

During the five years of its existence, iCarly enjoyed a high level of popularity: one episode of “iSaved Your Life” gathered 11.2 million viewers, which became the second most popular broadcast of Nickelodeon in history. The success of iCarly even led to the creation of two television films (iGo To Japan and iParty With Victorious), as well as the spin-off Sam & Cat, which starred Ariana Grande. The original iCarly show was also known for its list of famous guest stars, including Austin Butler, boy band One Direction, Jane Lynch, Taran Killam and even former First Lady Michelle Obama. Several performers were guest stars on iCarly either before their careers began or at the height of their popularity, as well as Emma Stone, already known at that time for such films as Easy A, The Amazing Spider-Man and Crazy, Stupid, Love. , belongs to the latter category.

Emma Stone plays a cameo role in the 6th season of iCarly, the 9th episode of “iFind Spencer Friends”. In this episode, Carly, Sam, Freddie and Gibby (Noah Monk) decide that Spencer from iCarly (Jerry Trainor), Carly’s older brother and guardian, should try to find friends his own age. Spencer has dinner with new friends that the gang manages to find for him. After all, he doesn’t like them because he has nothing in common with them, and they don’t like Spencer because they think he’s childish. While eating at the diner, the iCarly team meets Heather, played by Emma Stone, who is a big fan of iCarly. Heather immediately becomes enraged after meeting with Carly and friends, until she is dragged away by two employees of the diner.

Why Emma Stone appeared in Season 6 of iCarly

Emma Stone’s cameo has an interesting story, too. During an appearance on The Tonight Show with Jay Leno (via OK!), Stone explains that her cameo came after meeting Dan Schneider and the cast of iCarly at the Saturday Night Live afterparty. Stone told Schneider that she was a big fan of iCarly, and he invited her to play a small role in the show. It seems that Emma Stone’s cameo as Heather was inspired by her real-life fandom, although she probably wasn’t as bigoted as her character.

Stone’s cameo role is strange, but at the same time very funny. Since her film debut in the teen comedy “Super Bad”, Emma Stone has been known for her comedic talent, which manifested itself in her guest role in iCarly. Stone is great as Heather, making funny facial expressions and reading lines that are overly interesting. Emma Stone’s cameo in iCarly is even better because she’s been a fan of the show before. The iCarly reboot brought back iconic characters from the original series, such as Nevel and Nora, so creating Heather by Emma Stone would be fun. However, Stone is a very sought—after actress who has a sequel to Cruella in development, as well as The Curse, a half-hour Showtime comedy, so her availability may be in question. It would be great to revisit Emma Stone’s surprisingly weird cameo in iCarly in the future.

Everything we know about the MCU Phase 6: The Story, the...