Home Entertainment Explanation of each faction of Fallout London 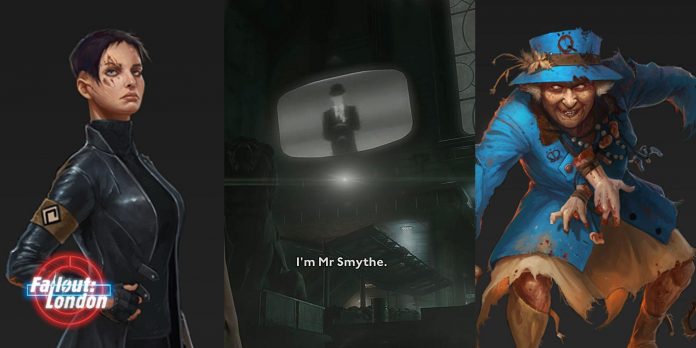 The team for the ambitious Fallout 4 mod Fallout London released a gameplay trailer last month. The video showcased the mod’s general premise, the first few minutes of the main quest, and some notable characters. It gave players a glimpse into a completely new post-apocalyptic wasteland, with a different environment and distinct factions.

Just like in Fallout 4, factions are a central part of the Fallout London experience, and the mod introduces seven of them to post-war London. According to the mod’s website, there won’t be any pre-existing factions from the official games, as the goal was to bring in new groups that would fit the context. Here’s a rundown of each known faction featured in Fallout London. Note that this is based on information found online and may change when Fallout London updates or is released.

RELATED: Fallout’s Power Armor is One of the Franchise’s Most Defining Features

The Gentry is comprised of the descendants of pre-war aristocracy and the British government. And based on the concept art above, it may also feature some familiar albeit ghoulified faces. Though despite the members’ pedigree, the Gentry does not have full control over London, likely because the other factions of Fallout London despise its influence.

Still, the Gentry has lofty plans for the Fallout London mod’s post-apocalyptic UK, and it intends to achieve this through strict rule over the people. To be considered “official” (perhaps in the context of the Gentry’s post-war society), people must possess a royal charter and pay tribute to the Gentry. In return, the organization will provide defense and aid. It’s unclear what this entails, but it might have to do with the Tommies’ or the Royal Guards’ support.

The Tommies are a civilian militia very similar to the Minutemen of Fallout 4. The only difference is that while the Minutemen are a primarily benevolent force, the Tommies are slowly devolving into nothing more than the aristocracy’s lapdogs. Volunteer soldiers defend London for the Gentry, but get little to nothing in return.

With its description, the Tommies sound like a powerful yet unorganized force. The troops have the appearance of “Retro-futurized Great War” soldiers. However, the group doesn’t seem to have a clear picture of its post-war London — no ambitions or goals. Perhaps this is why the Tommies became a mere tool for the Gentry. That said, if the group managed to concretize its ideals, then it could very well become a force to be reckoned with.

The 5th Column is a populist organization headed by Eve Varney. Little is known about Varney, but the organization she leads seeks to destroy London’s current systems and build a new empire in its wake. The 5th Column appeals to those in the bottom rungs of post-war London’s social ladder — those who abhor the aristocracy. Thus, the organization only grows stronger as Varney reaches out to more people.

Another interesting thing to note about the 5th Column is the fact that Varney appears to be venerated among the ranks of the group — and to a startling degree. As the description reads, the 5th Column preaches “the need to burn down the world and rebuild it in the image of their leader Eve.” It is supposedly only through her leadership that Britain can be reborn. This would certainly make for some interesting dialogue in Fallout.

Camelot, also known as “The Camelot Movement,” is one of the less powerful organizations in Fallout London. Forced underground by the Gentry and its violent attacks, this faction seeks to integrate a new representative republic to post-war London. Though it remains in hiding, Camelot is still very much intent on overthrowing the aristocracy through revolution.

Camelot is also interesting for its backing philosophy. Taking inspiration from the commandos of World War II and the legends of the Knights of the Round Table, the Camelot Movement emphasizes learning from the past in order to build a better future — and without carrying over the past’s baggage. It would certainly be an interesting faction, assuming the player would be able to join the ranks.

As the name implies, the Isle of Dogs Syndicate is a video game criminal organization. Its members are the remnants of a pre-war gang, but these aren’t your run-of-the-mill criminals. The Isle of Dogs Syndicate is composed of wealthy and distinguished members, largely focused on their trading and scavenging operations. Perhaps it’s the profits that keep the Gentry off the group’s back. That said, the members are open to a “change in management.”

Gaunt seems to be a nuanced character, as while he’s described as rude, he’s also said to have a good heart and wants the best for the Vagabonds. His attitude just tends to rub people the wrong way. He’d certainly make for an interesting NPC in Fallout London, especially since he’ll be styled in a Peaky Blinders-esque aesthetic.

The Institute of Fallout 4 was the bogeyman of the Commonwealth, just as Angel is the bogeyman of London. Though, hopefully, the latter is a more compelling faction than the Institute. That aside, Angel is the most elusive organization in Fallout London. It’s said to be comprised of the descendants of Britain’s pre-war deep science ministry, a group allied with the British government, and they have eyes on everyone.

The secretive group is led by the even more secretive Mr. Smythe, who makes an appearance in the Fallout London gameplay trailer. If anything, his character raises more questions than answers, setting the stage perfectly for what is likely Fallout London’s main storyline. It’s also worth noting that Angel’s insignia is eerily similar to that of Freemasonry.