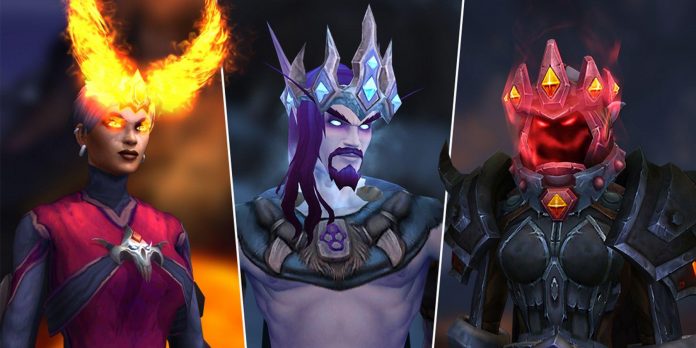 Amazon and Twitch Prime subscribers have had access to a huge amount of video game content over the years, ranging from simple in-game cosmetics to completely free games. This year Blizzard decided to join the service by offering in-game content for its library of games. Subscribers can now not only receive card sets for Hearthstone and loot boxes for Overwatch, but also a transmogrification set for World of Warcraft. These cosmetic items will be given out for several months, and in the future this may lead to even more World of Warcraft Prime Gaming privileges.

Earlier this year, Blizzard announced that it was working with Amazon to grant Prime Gaming privileges, and fans didn’t know what to expect. Some were concerned that Blizzard would block exclusive cosmetics for its game by subscription after another subscription. Instead, Blizzard decided to re-release a series of old cosmetic helmets that were withdrawn from the game store. Some players are upset that they bought these cosmetic items years ago and don’t get anything unique, but many players are happy to get their hands on these classic cosmetic items that they may have missed the first time.

RELATED: Explanation of Each World of Warcraft: Dragonflight Edition

The Return of Transmogrification Helmets in World of Warcraft

Prime Gaming will offer World of Warcraft players three different cosmetic helmets. These helmets are known as the Jewel of the Lord of Fire, the Hood of Hungry Darkness and the Crown of Eternal Winter. Each of them is unique and has a cool aesthetic, although now players can only claim the Pearl of the Lord of Fire. The other two will be available later in July and August.

These helmets were presented in the in-game World of Warcraft store back in 2013 at a price of $ 15 apiece. In 2018, Blizzard assembled all three of them into a “See you Later” set, along with three companions and three mounts. This set could have been bought just a month before all this cosmetics became unavailable. Players who bought them initially could still use them, but new players could not access them. This will change with the reintroduction of helmets through Prime Gaming, and other items in the “See you Later” set may follow suit.

How Players Can Get the Best World of Warcraft Game Items

World of Warcraft players who want to access these three helmets can easily do so. If a player already has access to Prime Gaming, they just need to link their account Battle.net . Players who don’t have Prime Gaming can subscribe to Prime or use the 30-day free trial. The game will not notify players that they have received a helmet, instead it will simply appear in the appearance menu. Then they can go to any transmogrification vendor and add a fire helmet to their gear.

Subscribers can get The Jewel of the Firelord until July 26, so there’s no rush. On July 27, the Hood of the thirsty darkness will be available until August 23. Then, on August 24, players will be able to receive the Crown of Eternal Winter until September 20. helmets, so players might want to go on Twitch and pick them up while they have the chance.

There is no news on what will be the next release of Prime Gaming for World of Warcraft. Perhaps this will be Blizzard’s way of giving away outdated cosmetic items as they try to attract more people to check out the game. If that’s the case, then there will surely be a lot more cosmetics in Prime Gaming, especially after the launch of Dragonflight later this year.

Every mobile game on Netflix is really worth playing