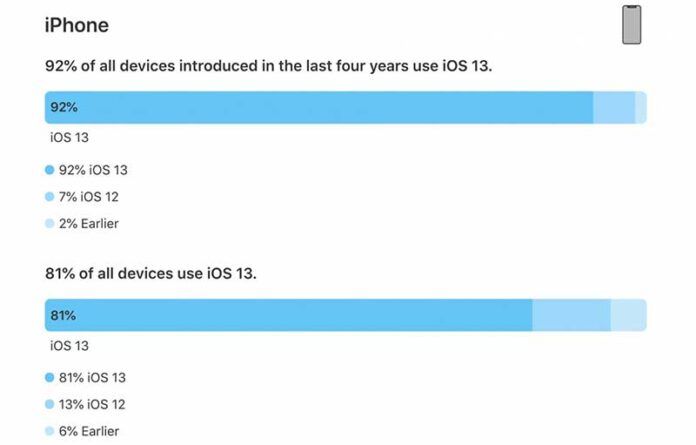 Apple announced which version of iOS was used most on iPhone phones. Accordingly, iOS 13 is by far the most used iOS version. As for the devices sold in the last 4 years, the rate is even higher.

Apple has released statistics on the most used operating systems on iPhones. According to these statistics, as of June 17, 2020, 81 percent of iPhone owners use iOS 13, 13 percent use iOS 12, and 6 percent use previous firmware versions. In the case of devices sold after June 17, 2016, the iOS 13 rate rises to 92 percent, while iOS 12 drops to 7 percent and previous firmware versions to 2 percent.

Here are the usage software firmware versions on iPhone and iPad:

Apple is expected to compensate for iOS 13’s frustration with iOS 14. According to recent claims, the iOS 14 update will be released for all devices running its predecessor, iOS 13. Apple plans to introduce the new mobile operating system iOS 14 at the World Developers Conference (WWDC) on June 22, if there is no delay due to the COVID-19 outbreak.

On the other hand, it has been revealed that Apple, which has been updating the operating system that it has used on iPhone and iPad devices for years, as iPadOS for iPads, was now in an iPhoneOS study. Apple has not yet made an official statement on the subject.