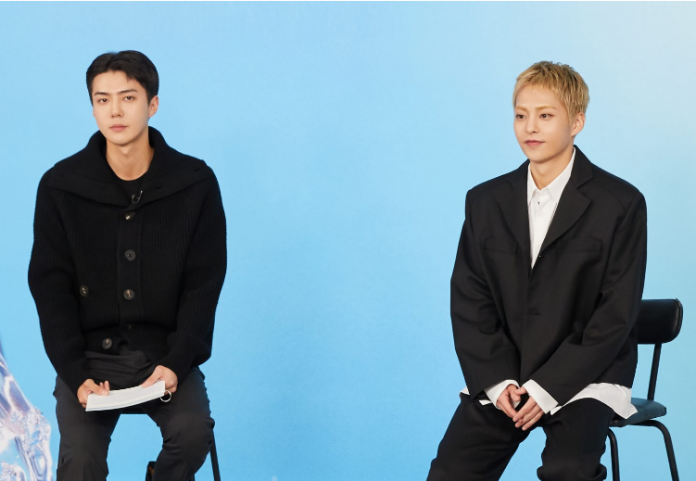 EXO’s Xiumin shared his thoughts on his solo debut!

On September 26, Xiumin held an online press conference dedicated to the release of his first solo mini-album “Brand New”, and the event was organized by his EXO bandmate Sehun. Xiumin excitedly remarked: “Since I’m officially releasing a solo album, I’m nervous and excited. I think this will be a turning point for me to rise to another level. Like the name of the album “Brand New“, I was working to showcase a new image.”

To describe the album with a keyword, Xiumin chose “gift” and explained: “I wanted to prepare an album as a gift for EXO-L [EXO fan club], who have been waiting for me for a long time. Since this first solo album fully reflects my tastes, it is of great importance to me, and I called it a “gift” in the hope that it will become an album that will make you feel good when you get acquainted with my new image.”

Xiumin also shared that “the gift” is a music video, saying, “I play two roles: the one who delivers the gift, and the gift itself. It will be fun to compare these two characters. I also captured my ice superpower from our [EXO] universe, as everything freezes at a single touch.”

Looking back when he first heard his title track “Brand New“, Xiumin said, “It was a song of the genre I wanted [for my solo debut]. There was a bright energy in it and it was incredibly catchy, so I thought this song would suit EXO’s Xiumin well.”

This is Syumin’s first solo album since his debut with EXO in 2012. Regarding this long period, Xiumin commented, “As a singer, my [recent] break has been a long one. I was drafted into the army, and after I was demobilized, my members joined the army, so it was difficult to advance as an EXO. I couldn’t just wait for my members, and I had to meet the fans. I really wanted to meet them as a singer. I wanted to release a solo album, meet the fans and show them my image as a singer.”

Then he frankly added Sehun: “I really want to promote EXO. It feels like we haven’t been on stage together for a long time. I miss it so much.” Sehun replied, “Soon.”

When asked about feeling pressured or anxious about his solo debut, Xiumin shared, “I felt more responsible. Since I have to compensate eight people alone, it seems like the weight is eight times more. I was also worried about whether I could succeed alone. I was watching my members who had released solo albums before me, and while they were getting ready, I thought, “They’re so awesome.” It’s not for everyone.” I respect them. I thought I’d grow up through it. When I’m promoted as EXO, I hope I’ll help my members in the right direction a little bit.”

Xiumin also shared how the support of his members gave him a lot of strength, saying that Sehun visited him on the set of his music video. On set, Sehun told him, “Oh, that’s good, that’s cool. Do you like it? Then you just have to do it.” Xiumin added, “My members told me to do what I like. That, unlike team promotions, I just had to do what I liked. And that the fans will love it and they will enjoy it with me.”

Before making his solo debut, Xiumin showed off many images as part of EXO’s group promotions, as well as his unit’s promotions with EXO-CBX. Comparing the three acts, Xiumin explained: “If EXO is silver, with a soft but mysterious image, then EXO—CBX is red, blue and green. The personality and charm of the three participants are revealed. Syumin’s solo album orange. It’s an incredibly attractive color, and it’s said to stimulate the appetite. Don’t you have to have an appetite to get a taste of life? I also think orange suits me very well.”

Five years after Xiumin collaborated with Mark from NCT in “Young & Free”, they reunited in “How We Do”, track #3 in “Brand New”. Xiumin explained that there were a lot of rap parts in “How We Do” and he didn’t feel confident performing them on his own. “The song was good, but I needed someone to do it,” he added. “I was also thinking about Sehun, but he was busy filming a drama. I kept thinking about Mark, so I asked him without much hesitation. Mark has also grown a lot in five years. I believe [the song] will shine thanks to Mark, so I’m looking forward to it.”

At the end, Xiumin commented to the fans, “Please listen to a lot of the solo album that I have been diligently preparing, and I hope that every day will be a happy day. I will be diligently promoting with various images, so please give me a lot of love and attention. Thank you.”

BTS in M! Countdown, How and where to watch the live...

Why This Season Is A Medical Drama Fan Favorite