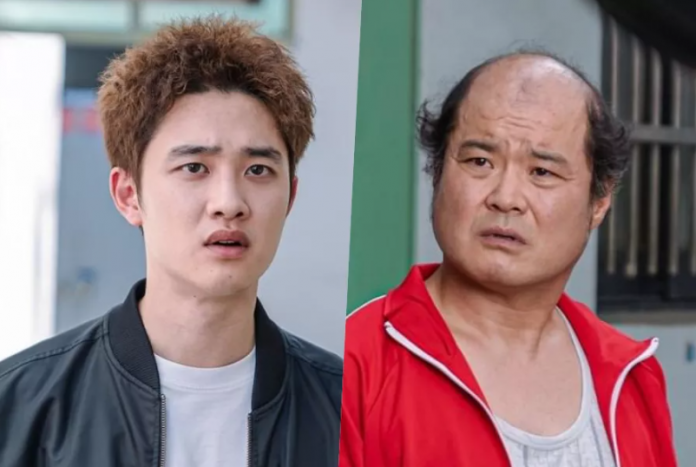 Get ready for quarrels and bromance between D.O. from EXO. and Kim Sang-ho in “Bad Prosecutor”!

“Bad Prosecutor” is a new KBS drama about an ill—mannered prosecutor with criminal tendencies who believes in fighting for justice by any means. EXO’s D.O.plays Jin Jung, a titled “bad prosecutor” who is determined to destroy those who use wealth and power to live above the law.

In the previous episode of “Bad Prosecutor,” Jin Jong was transferred to the Civil Affairs department, where he met the eccentric and poorly dressed department head Park Jae Kyung (played by Kim Sang Ho).

Although Park Jae Kyung initially stood up for Jin Jong when his fellow prosecutors showed up with a search and seizure warrant, proudly bragging that he wouldn’t hand over his “kids” to someone else, he hilariously showed that he barks more than he bites. refusing almost immediately afterwards.

In newly released footage from the upcoming third episode of the drama, two colleagues get close while spending time together in the office after hours. In one set of photos, two men can be seen fighting when Jin Jung complains about something to an outraged Park Jae-kyung, but in the next, Park Jae-kyung’s softer side shines when he warmly offers Jin Jung a plate of ramen late at night. night.

The producers of “Bad Prosecutor” teased, “Do Kyung Soo [D.O.] and Kim Sang Ho will deliver a new and refreshing kind of fun through their chaotic comedic chemistry.”

Speaking about the characters of the two actors in the drama, they continued: “It will be interesting to follow the changes that will occur as a result of the meeting of these two people. To find out what results Jin Jung and Park Jae-kyung’s quarrels lead to, please tune in to this week’s episodes of “Bad Prosecutor.”