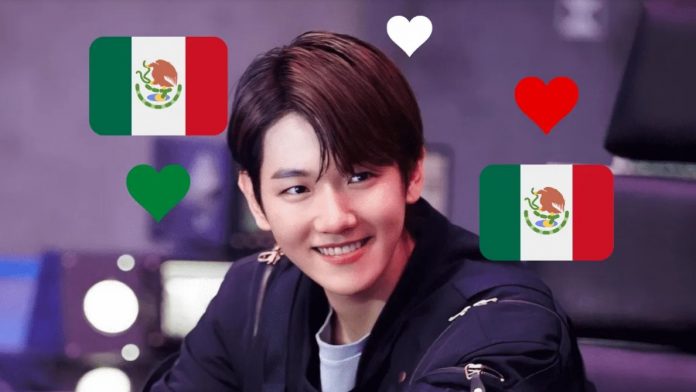 EXO’s Baekhyun won the heart of EXO-L from Mexico after he sported an elegant look with the traditional touch of our country and showed his love for the Aztec territory.

EXO and SuperM visited Mexico as part of their world tours and although the stay of the K-Pop idols was quick, that did not prevent them from being epochs, with unforgettable moments and one of them was given to us by Baekhyun .

In shows and musical presentations outside of South Korea, there will never be a shortage of fans who carry the flags of their country or another national element so that their favorite artists can be photographed with them.

During February 2020, Baekhyun, Taemin, Kai, Taeyong, Ten, Lucas and Mark from SuperM set foot on Mexican soil for a concert at the Arena Cuidad de México, the fans spent a good evening with the leader of the band who showed his love for the country.

At the concert of the SM Entertainment band , the singers and rappers offered a few words to the attendees, thanked their love and support, a fan wore a charro hat and made it come to the stage.

The accessory that gives a special touch to the typical charro suit caught Baekhyun‘s attention, first, he left it on the ground, but the followers yelled at him to put it on, then it took a few minutes until he picked it up.

The star donned the white hat with silver details and large shiny decorative designs, as soon as he put it on the screams flooded the venue and many fans took the opportunity to capture the moment.

This is the video of the moment:

The No Matter singer sang an excerpt from the song Sabor A Mí and Despacito , so the prize for SuperM and EXO-L fans was double. What did you think of the Mexican Baekhyun moment?