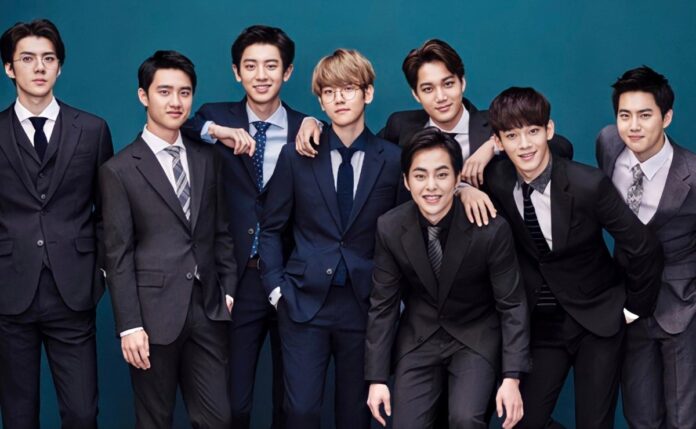 EXO idols have shown their looks and demeanor on stage, K-pop idols look just as attractive without any makeup, highlighting their natural facial features. Wow!

One of the elements that cannot be missing in the looks of K-pop idols is makeup, makeup artists care about giving artists an attractive and pleasant appearance.

EXO is one of the male boy groups that has experimented the most with their makeup styles, transforming into rough or futuristic boys for their MVs. The 9 singers and rappers modify their appearance depending on the concept of their comeback.

The stars of the group were captured without any makeup in their constant visits at the airport or in their daily routine, their natural faces stood out in the images, as did their visuals.

Next, we’ll show you the beauty of Chanyeol, Lay, Xiumin, Suho, Chen, D.O., Kai, Sehun, and Baekhyun without any makeup. Do you think your face changes a lot or your skin looks better without cosmetics?

THIS IS WHAT EXO MEMBERS LOOK LIKE WITHOUT MAKEUP

The EXO rapper sports a very healthy and naturally pleasing face. Chanyeol without makeup looks like a little less person, his eyes are still very happy and bright.

The Chinese member of the K-pop group has smooth and very healthy skin. All of Lay’s features can be seen better and in more detail, like the dimple in his cheek or his red lips.

Despite the fact that Xiumin is the oldest member of EXO, she has always distinguished herself by her young appearance, without makeup she looks even more tender, her skin takes a whiter tone, so much that her veins reach to distinguish.

See Also
WILL CHEN BE LISTED SOON IN THE ARMY? THIS IS WHAT THE FANS BELIEVE

EXO’s vocalist has great beauty, Baekhyun’s appearance without makeup is captivating, his facial features take on a more boyish touch, making EXO-L fall in love with his visuals.

The leader of the group from the agency SM Entertainment has a natural and serious look, Suho without makeup could pass for a very dedicated college student.

Chen’s face without makeup shows her visual, one of the characteristics of EXO’s idol is her skin tone, which looks radiant without a drop of cosmetics.

The vocalist and actor of the Hallyu medium has a very characteristic beauty without makeup, some areas of Kyunsoo’s face turn pink, giving a perfect touch to the rest of his features.

Jongin was harshly criticized for his skin tone, the idol has worked on his confidence and now he sports a clean and nice face without makeup, EXO-L loves seeing Kai natural.

Sehun’s face is often perceived as serious, his features are so strong that she has starred in various fashion campaigns. EXO’s maknae looks just as handsome with no makeup as he does with him.

The romantic story of Ariana Grande with Dalton Gomez

CAMILA CABELLO IS CONCERNED ABOUT AN FAN WITH ANXIETY AND GIVES...