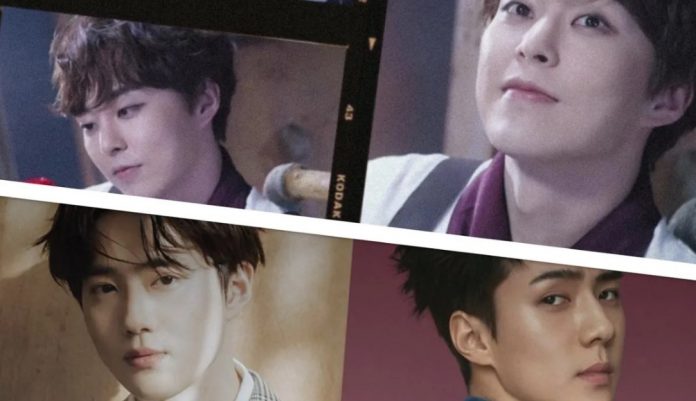 Xiumin stars in mbusical ‘Hadestown’ and fellow EXO members Sehun and Suho show their full support . EXO idols are full of talent and Xiumin tries a new side with all his skills in the musical ‘Hadestown’, his bandmates will not stop supporting him, so Suho and Sehun went to see his production.

EXO is a K-Pop group with a long history and a very solid fanbase , over 10 years as a group, we have been able to enjoy the talents of each of their idols ; both together and alone they have all given their best and demonstrated their unique brilliance.

The members of EXO have different specialties, not only sing and dance, many of them, like DO and Lay , have even put all their talents into acting and already have a long career in drama ; undoubtedly in many disciplines these artists manage to stand out magnificently.

With Xiumin there is no exception, the idol has also had participation in dramas and movies , but music and dance is his greatest passion, something he shows in the musical ‘Hadestown’; Since his announcement, EXO-L got excited about this artist’s project, and his fellow EXO members have also shown their full support.

What is the Xiumin musical about ? ‘Hadestown’ is a very popular Broadway musical , in which a new version of the ancient Greek myth is told about Orpheus who ventures into the underworld to save his love, Eurydice ; Orpheus offers to perform a beautiful song so that they return to his beloved.

Minseok stars in this musical being ‘Orpheus’, although the real myth has a different twist in the production and in addition to singing, Xiumin must also play the guitar.

For ‘Hadestown’, EXO’s idol shows a lot of his talent and the project succeeds more than ever thanks to the support of his fans and fellow members.

EXO’S SEHUN AND SUHO SUPPORT XIUMIN IN HIS MUSICAL ‘HADESTOWN’

To show their support for Minseok, EXO’s Sehun and Suho went to see ‘Hadestown’, the idols went to the theater and the audience also noticed their reactions, they both admired their bandmate from their seats and loved the dance scenes with them. protagonists. But they were very surprised to see the kissing scenes.

But in general, Junmyeon and Sehun had a lot of fun watching ‘Hadestown’ and supporting their friend without limits, without a doubt EXO idols have great affection for each other and they show it with these actions.

Shadows of Rose addition for Resident Evil Village will be the...