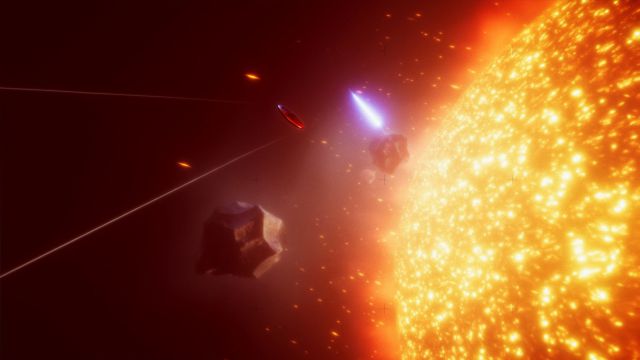 Exo One: We bend metal and energy in one of the most beautiful audiovisual journeys in recent years. “If we are really alone, how much space wasted.”, Contact, by Robert Zemeckis

… Many years ago (2012) we analyzed the indie Dear Esther, at a time when the video game industry was increasingly embracing independent proposals that challenged established video game canons. Dear Esther was basically a ‘walking simulator’, a work conceived not so much to be a champion of the Pad as made for quasi-pure contemplation alongside others such as Flow, Flower and Journey by Thatgamecompany or Everybody’s gone to the Rapture.

The title that concerns us today, Exo One, belongs to this category: games in which the playability is reduced in order to achieve a superior narrative audiovisual experience. And boy does he succeed.

A bouncing ball. Those are the 4 words that could define the playable base of Exo One. Because it is what it is: Imagine that you can control a metal ball on the ground, accelerate it using one of the buttons on the pad, roll it against an inclined surface and launch it at the air. Once airborne, by pressing one of the pad’s triggers, that metallic ball curves, flattens, and takes on the classic flying saucer UFO shape. Now you can handle it like a hovercraft and take to the skies …

But when the momentum runs out, the ‘momentum’ of the previous kinetic action you have done, it’s time to return to the earth’s surface, turn the saucer into a ball, get it to gain speed again, launch it into the air, ‘squash’ it so that be a UFO again and fly.

Well, this is basically all the gameplay of Exo One, an indie designed more for contemplation and relaxation than to get a perfect score at all levels. Because Exo One is like LEGO games: you can NOT die, never, you do not fall off a cliff and restart the level, simply stop having that energy that throws you through the air and you must recover it again. Gaining momentum, losing it and then winning it again is the basis of a gameplay that the Australian indie studio Exbleative is making a little more complex as we progress through the levels.

Loki: Fans React to The 1st Episode of The Series; Look