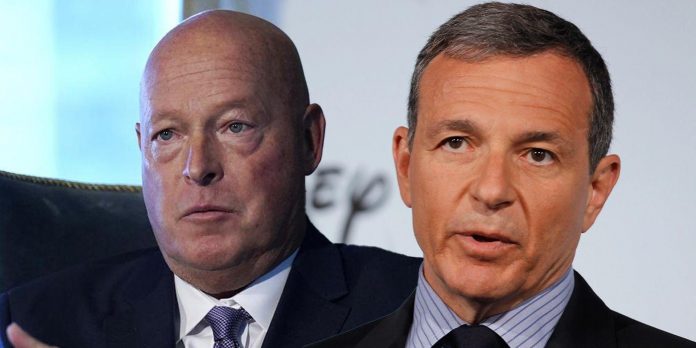 A few years after the leadership change began, a new report claims that former Disney CEO Bob Iger believes that choosing Bob Chapek as head of the company was a terrible decision. Iger has played a pivotal role in The Walt Disney Company’s growing influence in Hollywood over the past 30 years, first serving as president of ABC Television from 1994 to 1995, and then moving up the corporate ladder until he took over as CEO in 2005, replacing Michael Eisner. Iger will oversee Disney’s acquisition of Toy Story studio Pixar for $7.4 billion, Marvel Entertainment in 2009 for $4 billion, Lucasfilm in 2012 for $4.06 billion and 21st Century Fox shortly before his departure for $71.3 billion.
Helping usher in the golden age of Disney, including the launch of their streaming platform Disney+, Iger announced that he is stepping down as CEO and chairman of Disney at the expiration of his contract in 2021 and announces his intention to retire in 2020. Bob Chapek, who has served as chairman at various studio branches including Disney Parks, Experiences and Products, has been announced as Iger’s successor as CEO, while the former Disney CEO will continue to serve as executive director and chairman of the board and will assist Chapek in his transition. . Although there was a plan for all of this, it seems that the power exchange between Iger and Chapek wasn’t as smooth as it was supposed to be.
Related: Controversy over Every Disney+ Release: Black Widow, Pixar, Cruella and Others
A new Business Insider report claims that former Disney CEO Bob Iger considers Chapek’s appointment a terrible decision. Sources close to the situation recall that Iger planned to slowly hand over the reins of the studio for two years, although due to the COVID-19 pandemic and pressure from the studio’s board of directors, Iger sought to speed up the process to move on from the situation. It is reported that Iger also began to regret his decision a few weeks after his announcement, as the pandemic began to negatively affect Disney’s plans, and Chapek began to make serious restructuring plans.
Since Chapek took over as CEO of Disney, the studio has often been criticized by consumers and employees of the studio itself. While efforts to deliver content to viewers via Disney+ amid the ongoing COVID-19 pandemic have been met with some positive reviews, Pixar employees have faced a lot of resistance, who have expressed disappointment that Luca and Turning Red are receiving exclusive streaming releases. . In addition, Disney’s decision to simultaneously release “Black Widow” infamously led to a lawsuit by star Scarlett Johansson, which caused a lot of negative headlines as the two berated each other for their reaction to the situation.
Disney CEO Bob Chapek got into even more trouble due to his initial lack of reaction to Florida’s “Don’t Say Gay” bill and attempts to defend the studio’s position, which remains aloof from the situation despite their pro-LGBTQIA+ image. Chapek later apologized for his initial reaction to the bill and announced the allocation of donations to LGBTQ+ foundations and the cessation of donations to political parties in Florida. doubtful. While Iger may have retired from his tenure at Disney, it will be interesting to see if his frustration with Chapek’s tenure as Disney CEO continues after his recent contract extension.