Home Entertainment Everywhere the story of Final Fantasy 7 Rebirth may change compared to... 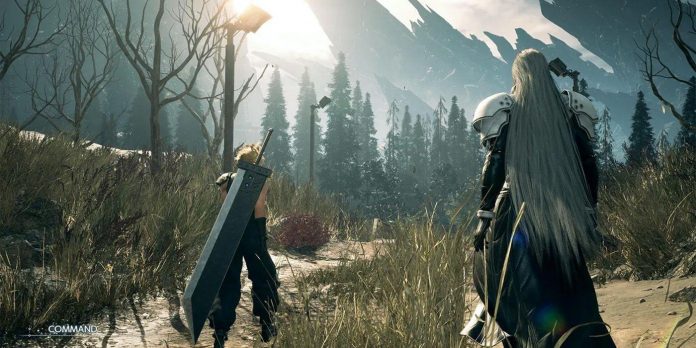 Lots of major news was revealed during the Final Fantasy 7 25th Anniversary Celebration live stream, from the announcement of a Crisis Core remake to a trailer and even gameplay of Final Fantasy 7 Remake’s sequel. With Crisis Core Reunion featuring Zack, who seemingly survived his grim fate in another timeline in Final Fantasy 7 Remake, it is safe to say that it will be an important installment for the overall story of the series. Since the two timelines seen in the first game may crossover with one another, Rebirth could have some major plot points from both Crisis Core and the original Final Fantasy 7 that could change.

Final Fantasy 7 Rebirth’s trailer showed glimpses of the sequel’s story as well as some gameplay. Beginning with a shot from the ending of the first game, Zack Fair, who survived his demise, is carrying a wounded Cloud towards what appears to be a ruined Midgar. The trailer then flashes to some brief scenes of the meteor Sephiroth intends to crash into the Earth, as seen in the original Final Fantasy 7. Cloud, Tifa, and a few other iconic FF7 characters speak throughout the trailer, with a quote even alluding to the death of Tifa, rather than Aerith, who dies in the original game. It seems to be Final Fantasy 7 Rebirth will feature a brand new story, rather than continuing the remake many fans were originally thinking the sequel trilogy was going to be.

Zack Fair is set to return this Winter in Crisis Core Reunion, a prequel to FF7. Zack is a major character who is Cloud’s best friend and the core of his character development. The original wielder of the iconic Buster Sword, Zack is a First Class soldier for Shinra, and, in the original Crisis Core, meets a gruesome fate at the hands of Shinra soldiers while defending his best friend. In Final Fantasy 7 Remake, however, Zack survives and carries Cloud to Midgar. Crisis Core Reunion could be similar to Final Fantasy 7 Remake in the sense that it could show the canonical events leading up to that final battle, only to show a new story that ends with Zack surviving.

With Zack surviving his fate in this new timeline, Rebirth may show fans some new interactions between the First Class soldier and other iconic Final Fantasy 7 characters. Zack was Aerith’s boyfriend in the original timeline, and that is unlikely to change, so we may see the two happily together throughout Rebirth until Aerith meets her death at the hands of Sephiroth. Even her death, however, could be subject to change in the next few games.

Tifa May Die Instead Of Aerith In Final Fantasy 7 Rebirth

Fan-favorite FF7 character, Tifa Lockhart, may be kicking the bucket in Final Fantasy 7 Rebirth. This is even alluded to in not only the first trailer for Rebirth but also a cutscene in Final Fantasy 7 Remake. The cutscene occurs upon entering Shinra tower’s Visual Entertainment Hall. As Cloud, Tifa, and Barrett are watching the usual Shinra propaganda, Cloud has another hallucination. This time, however, Cloud is witnessing a major cataclysmic event, likely the meteor crashing into Midgard. As he watches in horror, he glances at Tifa, with Sephiroth right behind her, sword unsheathed. Tifa is stabbed and falls over and as Cloud runs to her, her body disappears.

In the original FF7, Aerith is really the only member of the gang that is killed, and it is her death that helps save humanity from the meteor Sephiroth and Jenova unleash. If Rebirth diverges in this major plot point in FF7 and Aerith survives rather than Tifa, that could mean a far worse fate for the planet in this new timeline. Aerith’s memories and life force became one with the planet’s, which allowed her to destroy the meteor and ultimately save humanity, sacrificing herself in the process. This is because Aerith is a powerful being from a race of ancients named the Cetra. If Tifa dies in her stead, she would likely just die like a normal human, unable to prevent the inevitable apocalyptic event soon to come.

Final Fantasy 7 Remake, Crisis Core: Reunion, and Rebirth could all be a sequel trilogy to the original 1997 FF7 game. All of this can be due to the planet’s life force being a sort of afterlife in the world of FF7. People who die have their memories and souls combined with the planet’s Mako, allowing them to live on in a new realm of existence. Powerful beings like Aerith and Sephiroth are able to influence the material world even in death, which is why Aerith was able to save the world from Jenova’s meteor originally.

The events of this new Final Fantasy 7 trilogy could be a direct sequel to the first game, as Sephiroth or even Aerith could be trying to redo a new timeline for their own motives. For Sephiroth, he could be trying to begin a new timeline where he succeeds in his master plan. For Aerith however, she could be looking for a timeline where both she and Zack survive and live happily ever after. This could give for a major twist, making Aerith a type of antihero who wants to find her happy ending after giving her friends theirs in another timeline. This could also explain why Zack survived his original grim fate in Remake.

FF7 Remake had surprising story surprises, and judging by the mystery and hints of Rebirth’s trailer, it seems like the sequel will be the same. There are so many routes this new story could take, from continuing the original 1997 game to creating a darker new one. With the survival of Zack Fair, it is safe to say that the story of Final Fantasy 7 will change, for better or for worse. Fans will just have to wait and see how everything plays out with Crisis Core: Reunion this year, and Final Fantasy 7 Rebirth coming next winter.

The Rookie: First video of the new spin-off that will have...