Home Entertainment Everything You Missed in The Xenoblade Chronicles 3 Direct 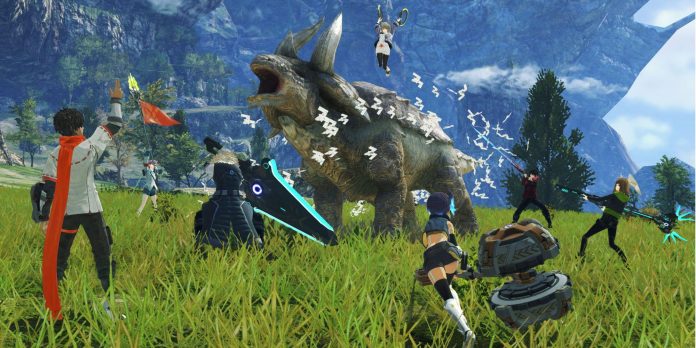 The Story & World Of Xenoblade Chronicles 3 Has Been Revealed

The story of Xenoblade Chronicles 3 involves a conflict between the nations of Keves and Angus. The people of Aionios only live for ten years and that span of time is spent in battle. Xenoblade Chronicles 3 has six playable characters, with three from each side of the conflict, who must join together against a common foe. Together, they must learn the truth about the war in Aionios, which means turning against their former allies and causing them to be outcasts from their homelands.

Like the other entries in the series, the world of Xenoblade Chronicles 3 is gorgeous to behold, with strikingly different environments that are teeming with monsters. There are colonies throughout the land that belong to the two factions, where the player can buy gear, complete side quests, and eat stat-boosting meals. There are also rest spots in the world, where the player can craft items, cook food, and experience conversations between the characters. The player can unlock fast travel routes as they explore, and set quest routes that show them the quickest path to their objective.

XC3’s combat system shares elements with previous games, including Xenoblade Chronicles X still only on Wii U, with the battles taking place in real-time, and the player using the characters’ Arts against the enemy. There are different character roles in battle: Attackers specialize in DPS, Defenders draw aggro, and Healers heal their allies. Combat is all about using Arts combos to inflict status effects, in order to increase the damage of the next attacks, with Chain Attacks allowing multiple party members to attack at once. Outside of the six main characters, there is a seventh slot that is filled by different heroes of Aionios, who can be switched out with each other, and each has its own unique classes.

Related: Summer Game Fest Is The Biggest Hint A Nintendo Direct Is On Its Way

The party members in the series’ narrative concluding Xenoblade Chronicles 3 have their own characters classes: Swordfighter (Attacker) is the everyman combat class, Zephyr (Defender) evades attacks and performs counters, Medic Gunner (Healer) uses healing spells and buffs from afar, Tactician (Healer) uses paper talismans to inflict debuffs, Heavy Guard (Defender) uses the biggest weapons and specializes in drawing aggro, and Ogre (Attacker) deals a ton of damage with slow attacks. Xenoblade Chronicles 3 uses a similar system to Final Fantasy V, where players can learn Masters Arts from one class and apply them to others, allowing the player to unleash Fusion Arts, where two effects are combined in one action. The six main characters can also learn the unique classes of the hero units.

The unique gameplay gimmick is the Ouroboros system, which allows two characters to fuse together into a robot, a feature that might be explored in the Xenoblade Chronicles 3 Special Edition art book. These units are incredibly powerful, but the characters can only maintain this form for a short period of time. The player can switch the controlling character, giving them access to both sets of Arts. The Ouroboros units have their own skill trees, allowing the player to unlock new abilities for them. It’s also possible to transform into an Ouroboros unit as part of a Chain Attack.

Xenoblade Chronicles 3 Will Have An Expansion Pass

The Shulk Amiibo Will Add The Monado To Xenoblade Chronicles 3

The amiibo figures might have fallen out of favor with Nintendo, but they’re alive with third-party developers, such as Capcom’s Monster Hunter Rise amiibos. Xenoblade Chronicles 3 also has amiibo functionality, with all figures providing helpful items when scanned. If the player scans a Shulk Super Smash Bros. amiibo, then the appearance of Noah’s sword will resemble the Monado blade used by Shulk in the original Xenoblade Chronicles. Pyra and Mythra have yet to receive their Super Smash Bros. amiibo figures, so it’s unclear if they will also unlock content in Xenoblade Chronicles 3 in a future update.