Home Entertainment Everything You Missed in The Boys S3 Episode 7 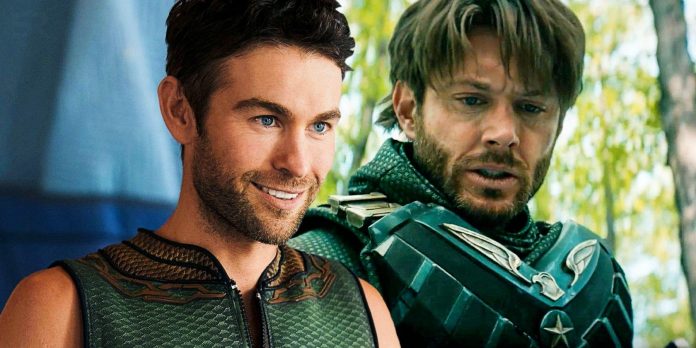 Here is every Easter egg and reference viewers might have missed in The Boys season 3, episode 7 – titled “Here Comes a Candle to Light You to Bed.” The third season of Prime Video’s hit superhero show is somehow already nearing its end. Audiences finally saw The Boys season 3’s Herogasm event in the last episode, which included an epic fight where Soldier Boy and a superpowered Billy Butcher teamed up to battle Homelander.

The Boys season 3, episode 7 continues the story after the events of Herogasm, with Starlight’s decision to quit The Seven and out Homelander and Vought’s corruption sending shockwaves through the superhero community. The episode updates what happened after A-Train killed Blue Hawk, confirms that Queen Maeve is still alive, and shows the truth about why Payback betrayed Soldier Boy. All of this happens before The Boys season 3, episode 7 delivers another huge twist to some of the main characters, as Homelander is revealed to be Soldier Boy’s biological son created by Vought.

Related: The Boys’ Herogasm Beat The Hype (But Not For The Reasons You Think)

As the main story unfolds, there are plenty of more The Boys season 3 Easter eggs and pop culture references in episode 7. Celebrities like Tom Hanks are name-dropped, while changes to the comics and callbacks to earlier moments in the show also take place. This includes more parodies of Marvel and DC characters and a lot of focus on Black Noir. Here is everything viewers could have missed in The Boys season 3, episode 7.

The very beginning of The Boys season 3, episode 7 includes a pleasant surprise, as Paul Reiser’s The Legend returns. The comics’ Stan Lee parody joined the series during this season, but it was not clear if he would appear again. After holding onto Soldier Boy’s costume for all those years, Legend once again comes to the aid of the legendary Vought superhero, Billy, and Hughie. He lets them stay in one of his houses for a short time as they plan their next move. Paul Reiser’s Legend is still quite a bit different from the version depicted in Garth Ennis’ comics, though.

As part of Legend’s role, there is also a fun The Boys season 3, episode 7 Easter egg for The Deep. Chase Crawford’s version of the (literally) aquatic animal-loving Supe is quite a bit different from how Garth Ennis’ comics depicted him. This includes the design of The Deep’s costume, which is much more modern and less ridiculous for the show. However, The Boys season 3, episode 7 includes a reference to his original comic helmet. A vintage diving helmet can be seen in Legend’s house sitting on a table, which is a clear nod to The Deep’s comic costume. The fun Easter egg indicates that Vought and The Deep used the helmet in the past, even if he does not wear it anymore.

How The Boys Season 3 Changes The Comic’s Vision Parody

The Boys season 3, episode 7 also includes the true introduction of Mindstorm, a member of Soldier Boy’s Payback team. Those familiar with the original comics might not remember Mindstorm, but that is for a good reason. He is a reimagined version of Mind-Droid, who is a parody of Marvel’s hero Vision in the comics. Mindstorm has telepathic powers just as Mind-Droid has in the comics, but the purpose of these abilities is to torment an enemy with their worst moments until they die. Mindstorm also does not have a robotic suit in The Boys season 3 as Mind-Droid has in the source material either. One thing that Vision and Mindstorm have in common? They both die with massive holes in their heads.

On top of all the superhero and pop culture parodies The Boys includes, the show also repeatedly mocks actual businesses that exist in real life. Whether it is Vought+ instead of Disney+ or Vought A Burger instead of Whataburger, season 3 includes the incorporation of this universe’s version of Chuck E. Cheese. Black Noir is seen hiding out in Buster Beavers Pizza in The Boys season 3, episode 7. The abandoned business indicates that the Chuck E. Cheese parody is not thriving in this fictional world. This is not the first time Buster Beavers Pizza has been referenced, as one of the Seven on 7 with Cameron Coleman videos used to promote The Boys season 3 included a fake commercial for the restaurant/game center.

Another The Boys season 3, episode 7 reference comes when Black Noir’s massacre at a Hard Rock Cafe in Lagos is mentioned again. This incident is mentioned again in Black Noir’s secret hideout at Buster Beaver’s Pizza. Robert Singer first mentioned in season 3, episode 1 that what happened at the Hard Rock Cafe should have made Black Noir a war criminal. The fact that Black Noir’s hallucinations of Buster Beaver and his animated friends bring it up again indicates that even the silent Supe is haunted by what happened here. Perhaps this will be something for The Boys season 3 finale to address or a plot line that will be explored in season 4.

Audiences also learn much more about Billy Butcher’s origin in The Boys season 3, episode 7, including a big change for his brother. Thanks to Mindstorm’s powers, Billy is tormented by his past and sees his relationship with his younger brother, Lenny. The episode reveals that Lenny died by suicide when he was a kid and after Billy left the family. Lenny dies in the comics as well, but he is killed when he’s hit by a bus. The Boys season 3, episode 7 reveals he died by suicide after using a gun when his father began abusing him more once Billy left. Karl Urban’s character is haunted by his brother’s death even more as a result.

Homelander spends much of The Boys season 3, episode 7 dealing with the fallout of Starlight’s video. He is extremely stressed about Starlight’s antics, but his feelings are made even worse due to the beatdown he endured at Herogasm by Soldier Boy. After he almost attacks a civilian he mistakes for Jensen Ackles’ The Boys character, Homelander knows he needs to relax a bit. This brings him to return to his milk obsession that started with Madelyn Stillwell. However, The Boys season 3 twists the obsession to have Homelander’s focus turn from human breast milk to a cow. After milking the cow himself and seemingly getting some pleasure from this, Homelander drinks it straight from a bucket.

There is also another food-related reference in The Boys season 3, episode 7, but this one is for Black Noir. During the cartoon animal flashback/dream sequence that showed Vought’s Stan Edgar was behind Payback’s betrayal of Soldier Boy, the former CEO is eating almond nuts. Black Noir asks if he could stop because he is allergic to them. Vought may have created Black Noir to be a lethal killing machine, but the nut allergy is one of his only known weaknesses. The Boys season 2 included Queen Maeve sending Black Noir into a coma after shoving an Almond Joy in his mouth, and now season 3 reminds viewers of this weakness.

How to view the fare on Google Maps