Home Entertainment Everything You Missed in Boys S3 Episode 5 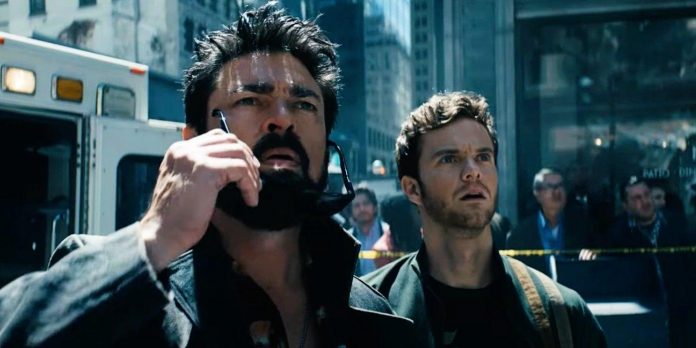 The Boys season 3, episode 5 includes plenty of Easter eggs, callbacks, and comic references that viewers might miss. The third season of Prime Video’s hit superhero satire show is already halfway through its story. Billy Butcher (Karl Urban) and The Boys’ pursuit of finding a weapon capable of killing Homelander (Antony Starr) comes as The Seven’s leader has taken complete control of Vought.

The multiple storylines at play in The Boys season 3 evolve even further in the fifth episode. Hughie Campbell (Jack Quaid) begins to love the power he receives from Temp-V, even though this begins to put a strain on his relationship with Starlight (Erin Moriarty). The need for this power becomes all the greater when Soldier Boy (Jensen Ackles) travels to America. The Boys search for the legendary hero they helped free after seeing that his blast took Kimiko’s (Karen Fukuhara) powers away. It is their belief that he could do the same to Homelander and give the group a window to kill the unhinged Supe.

Related: The Boys: Why Starlight Should Kill [SPOILER]

Unsurprisingly, The Boys season 3, episode 5 has a lot of Easter eggs and references for viewers to pick up on. Some of these references are specific to the show, while others include introducing new characters from Garth Ennis and Darick Robertson’s comics. There are also some pop culture references that raise more questions about this fictional universe, as well as some possible teases of what is yet to come in season 3 and the expanded The Boys franchise. Here is a guide to everything you missed in The Boys season 3, episode 5.

Vought Covers Up Another Supe Death

Vought’s abuse of their power is a recurring plot device for The Boys, and that continues with the aftermath of Homelander killing Supersonic. The show has previously shown that the organization is perfectly fine with twisting the narrative to protect its brand, especially when it comes to covering up the worst acts of its biggest superheroes. Instead of outing The Seven’s leader as a vengeful murderer, Vought and their new CEO help cover up Supersonic’s death as being part of a relapse. The Boys season 2 previously showed Vought protecting Translucent’s image after his surprise demise, making sure he would be remembered as a hero. However, Supersonic does not get the same treatment in The Boys season 3, episode 5.

There is also a sweet callback to Hughie and Starlight’s relationship in The Boys season 3, episode 5. When Annie visits Hughie in the episode after he returned from Russia, he surprises her with some of her favorite things due to Supersonic’s death. This includes a few Almond Joy bars. The Boys season 2 previously had the two joke about their favorite candies while on a mission, which is where Starlight mentioned her love for Almond Joys. Not only did the Almond Joys play a big role later in the season to take down Black Noir, but now season 3 assures viewers that Hughie didn’t forget this detail about Starlight.

Hughie’s transformation in The Boys season 3 has been quite significant, as he’s fully embracing the power he gets from Temp-V. It appears that Hughie’s Compound V powers might not be all that temporary after all, though. One of the running gags earlier in the season is that Hughie can’t open a jar, seemingly because he is too weak to do so. But when he returns from Russia and does not have his teleporting powers anymore, Hughie successfully opens a jar with ease. It is through this moment that The Boys season 3, episode 5 hints that the Temp-V might be changing Hughie on a more permanent basis.

The world that The Boys exists in is quite different from reality, especially as far as pop culture is concerned. Vought’s Cinematic Universe has replaced the MCU and DCEU, but it appears that the Fast & Furious franchise has lived on. Hughie references Dominic Toretto and his love of family in The Boys season 3, episode 5, but this reference actually creates two major issues. Charlize Theron joined The Boys season 3 as a Stormfront actress for Dawn of the Seven after playing Cipher in multiple Fast & Furious movies. Meanwhile, Mother’s Milk actor Laz Alonso appeared in a small role in the franchise’s fourth and sixth installments. While it is possible Theron is an actress in The Boys’ universe and joined the VCU in this fashion, there is no real way to make sense of Laz Alonso the actor and Mother’s Milk existing in the same universe.

There is also a very obvious Spider-Man reference in The Boys season 3, episode 5. One of the most iconic lines in the wall-crawler’s mythology is “with great power there must also come great responsibility” or some variation of it. The quote has been used in the comics and all three of Sony’s Spider-Man movie franchises. In an expected fashion for Prime Video’s satirical superhero show, Billy Butcher has his own take on this idea. He tells Queen Maeve that “with great power comes the absolute certainty that you’ll turn into a right c***” during the fifth episode. Billy’s version of the saying is the antithesis of Spider-Man’s quote, implying that anyone with this type of power will not use it for the right reasons.

The Boys Season 3’s Silver Kincaid Is A Legacy Hero

After introducing a hero named Silver Kincaid earlier in the season, The Boys season 3, episode 5 includes a small detail that means she is a legacy superhero. The episode very briefly shows a poster in The Seven Tower that shows the Silver Kincaid and the Crimson Countess, teasing a movie or TV show. Since Countess is effectively retired as a superhero, this poster must be from the past. That means that someone else held the Silver Kincaid mantle in the past. Considering that version of the hero was widely accepted by Vought, it makes the decision to forgo Starlight’s recommendation that this newer Kincaid should join The Seven even more noteworthy.

The Boys Uses A-Train to Tease Its College Spinoff

Prime Video’s upcoming The Boys college spinoff might also have received another tease in season 3, episode 5. During A-Train’s meeting with Blue Hawk, there is a mention of an old coach they both worked with in the past. Considering their very different power sets, it is possible that the coach Blue Hawk references is someone at the Vought college that trains the company’s next generation of heroes. This is the setting of the untitled The Boys college spinoff, so A-Train’s former coach could be introduced here potentially.

The Legend Brings The Boys’ Stan Lee Parody To Life

The Boys season 3, episode 5 introduces the source material’s Stan Lee parody thanks to the debut of The Legend, played by Paul Reiser. Legend is an old comic book creator in the source material who has great trust with Billy Butcher but no one else. The Boys changes much about the Stan Lee parody, making him a former Vought employee who does not like Butcher. His past with Vought gives him long-running connections to the Supe world and Soldier Boy, and his apartment is covered in Supe memorabilia.

The trend of having producer Seth Rogen cameo in The Boys continues in season 3, episode 5, but in a very different form. He’s previously appeared in the series as a version of himself who is an actor within the VCU. Despite being compared to the Phil Coulson of the VCU, The Boys season 3, episode 5 shows a very different side of him. Seth Rogen’s cameo is as a user of Supe Porn Platinum with the name Sir-Cums-A-Lot-779 who has bought time with Crimson Countess. It appears that even as a member of the VCU, Seth Rogen’s The Boys character can not get enough of them.