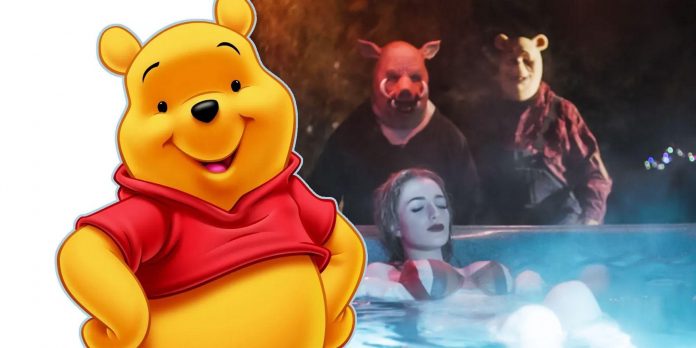 In the upcoming movie “Winnie the Pooh: Blood and Honey”, the beloved children’s character will play in a horror movie. Screenwriter and director Rhys Frake-Waterfield, “Winnie the Pooh: Blood and Honey” rethinks the slasher thriller with the characters of AA Milne in the lead roles. Milne’s most popular character is gentle Winnie the Pooh (despite his ban in China). Original stories are becoming public domain, and Pooh and Piglet are ready for a bloody rage, dodging their classic tales of charming adventures.

The independent production of “Winnie the Pooh: Blood and Honey” attracted attention when footage from the film was published online. This news caused a mixed reaction from the public, some were horrified by what Winnie-the-Pooh had turned into, noting that everything could easily go wrong as soon as the famous work became public. On the other hand, others expressed genuine interest and curiosity in the bizarre concept, applauding the director’s imagination and creativity.

In a recent interview, Frake-Waterfield told how difficult it was to combine elements of horror and comedy, especially since the characters of his film have already formed. After all, compared to Christopher Robin’s feature film, “Winnie the Pooh: Blood and Honey” can just become an absurd and disrespectful retelling if not done correctly. With production starting in early 2022, filming was completed in just 10 days. However, although little is currently known about Winnie the Pooh: Blood and honey, here’s the news about his story, cast and release date.

How can you make a horror movie about Winnie the Pooh (what about Disney?)

Every year thousands of creative works become public domain. Since these literary and artistic works are already free from intellectual property rights, anyone can use them, as well as create, publish or distribute works based on them without obtaining a license. Under U.S. copyright law, works published from 1923 to 1977 will become public domain 95 years after their first publication.

This year, books published in 1926, including A. A. Milne’s first book about Winnie the Pooh, are going into the public domain. But in 1966, Disney acquired the copyright to the character and created its own versions of Pooh — the iconic yellow bear in a red shirt — and other characters such as Piglet, Eeyore and Christopher Robin. Thus, everything that is included and described in detail in the book has become free for everyone; Winnie-the-Pooh: Blood and Honey is strictly based on the 1926 book, where Pooh and Piglet are dressed in a lumberjack costume and black clothes, respectively. Also, since other characters like Tigger were introduced later and are therefore still copyrighted, they won’t appear in the horror movie.

Details of the history of Winnie the Pooh: Blood and honey

Recently, the director of the film “Winnie the Pooh: Blood and Honey” revealed the details of the plot of the horror film. When Christopher Robin left Winnie the Pooh and Piglet in college, these two were left without attention and had to stand up for themselves, as a result of which they returned to their animal roots and became wild. Pooh and Piglet resorted to hunting prey and eating their victims; before the events of the film, they even ate Eeyore to survive. Years later, Christopher will return with his wife, but the hatred and resentment of his old friends have already resulted in a bloody frenzy directed against female students.

When will Winnie-the-Pooh come out: Blood and Honey?

It is reported that due to the huge number of responses caused by footage from the film, the post-production of Winnie the Pooh: Blood and honey are accelerating. Despite the fact that Waterfield has been involved in four other films, horror retelling remains a high priority. At the same time, although the official premiere date has not yet been announced, “Winnie the Pooh: Blood and Honey” may already be ready for release in late 2022 or early 2023.

TimeSplitters: New Game in The Series is in Development