Home Entertainment Everything we know about Dune, part 2 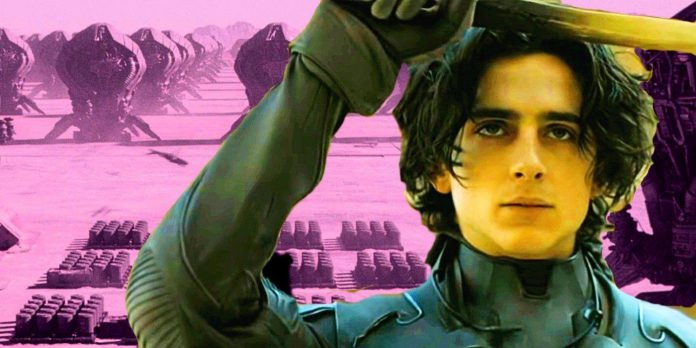 Despite its extended runtime and in-depth world-building, Denis Villeneuve’s Dune only tells half the story of Frank Herbert’s original novel. Dune Part 2 is coming in 2023, and there have also been confirmations regarding who will be joining the Dune 2 cast. More and more is getting revealed about the fate of House Atreides in Dune 2.

The main story of Dune focuses on Paul Atreides, the teenage son of Duke Leto who travels to the desert planet Arrakis with his family. Arrakis, also known as Dune, is a desert planet and the only known hub for the production of Spice – a mystical substance that can both heighten awareness and fuel interstellar travel. Although the Atreides head to Arrakis to reform Spice production and increase prosperity, it soon becomes clear that they have walked into a trap laid by the Padishah Emperor Shaddam Corrino IV and their mortal enemies, the Harkonnens. Paul is forced to flee with his mother, the Lady Jessica (played by Rebecca Ferguson) before mustering a rebellious fighting force from the local people, the Fremen.

The novel itself concludes with the destruction of House Harkonnen, the fall of the royal House Corrino, and the installation of Paul – now known by his followers as Muad’Dib – as the next Emperor. Villeneuve’s first movie finishes long before these events, and instead focuses on setting up the narrative and establishing the world of Dune. As a result, there is still much of the story left to be told in a future sequel, with exciting additions to the Dune 2 cast confirmed. Here’s everything known about Dune Part 2 so far.

In terms of the Dune 2 cast, Emperor Shaddam IV, who will notably be played by Christopher Walken, is perhaps the most anticipated character – but only because there’s been no news regarding any possible casting choices for the House Atreides battle pug. Moreover, some might argue that this honor belongs to Feyd-Rautha Harkonnen or Princess Irulan, who will be played by Austin Butler and Florence Pugh respectively. Meanwhile, Lady Margot, the Bene Gesserit wife of Count Hasimir Fenring, will be played by Léa Seydoux.

These are not the only new characters that viewers can expect to see in Dune Part 2. Notably, there’s been no news regarding who will play Alia Atreides, also known as Alia of the Knife. In the book, Paul’s sister Alia is a born prescient whose powers are awakened in the womb when Lady Jessica ingests the Water of Life. This happens during a ritual in which Jessica becomes a Sayyadina, a Reverend Mother to the Fremen. There have been rumors about Anya-Taylor Joy playing the role of Alia in the Dune 2 cast, although these rumors could be just as false as the ones about Harry Styles playing Feyd-Rautha Harkonnen.

In terms of the returning cast, several key characters would have to return for Dune Part 2 to be a success. Not only would Timothy Chalamet’s Paul Atreides need to feature prominently, but figures such as Javier Bardem’s Stilgar, Zandaya’s Chani and Rebecca Ferguson’s Lady Jessica will also need to play significant parts. However, should the film follow the book, some characters would not make return appearances. Oscar Isaac’s Duke Leto, for instance, would not appear unless in flashback form after his death at the hands of the Harkonnens. On the other hand, Jason Mamoa’s Duncan Idaho gets resurrected as a ghola in the books, while Josh Brolin’s Gurney Halleck reunites with Paul at some point in the second half of Frank Herbert’s Dune – and they’re likely also part of the Dune 2 cast. The sequel will also reveal what happens to Stellan Skarsgård’s Baron Vladimir after he was poisoned by Leto’s tooth.

Related: How Dune’s Baron Is Connected To House Atreides & What It Means For Part 2

Dune Part 2 Story Details – What Happens In The Book?

The new movie covers roughly half of the original novel, up until Paul’s meeting with the Fremen tribe led by Stilgar. This means that Dune Part 2 will be an action-packed blockbuster focused on the guerilla war between Paul’s Fremen and Arrakis’ Harkonnen oppressors. After a two-year conflict, Paul will eventually emerge victorious and even successfully depose the Emperor after Shaddam IV attempts to bring Arrakis to heel with the presence of his elite Sardaukar stormtroopers. This sets the stage for the wider Dune saga and the ascension of House Atreides.

Dune 2 will be released in theaters on October 20, 2023 – as long as the production sticks to its schedule of starting in July. Not only has screenwriter Eric Roth confirmed that a full treatment for Dune Part 2 has already been written, but director Denis Villeneuve had already revealed in an interview with Total Film (via Games Radar) that he is optimistic about the project’s progress. As Villeneuve explained, “it would need a really bad outcome at the box office to not have a Dune: Part Two, because (the studio) love the movie. They are proud of the movie, so they want the movie to move forward. And they still did half of it. So, you know, I’m very optimistic.” And a sequel is indeed materializing.

Why Dune Is Split Into Two Parts

Although Frank Herbert’s original 412-page novel is by no means the longest book to receive a theatrical adaptation, the universe it established is incredibly complex. In addition to the futuristic setting, the story incorporates elements of mysticism, philosophy, extrasensory perception, religion, genetics, and technology. This means that any adaptation has to first indulge in extensive world-building in order to create something conceivable for audiences. Taking a cue from the long list of divisive or outright failed Dune adaptations, Villeneuve’s decision to make two movies is the first time for any director to crack the problem of being limited to a single film. By splitting the film into two parts, Villeneuve has given himself the best opportunity to deliver a faithful recreation that does justice to Herbert’s beloved seminal sci-fi masterpiece.

The new Dune 2 cast – Florence Pugh, Christopher Walken, Austin Butler, and Léa Seydoux – face a great challenge in satisfying audience expectations about their respective characters. However, the success of the first Dune bodes well for Villenueve’s Dune Part 2. If everything goes well, Villenueve might just get the chance to complete his trilogy adaptation with Dune Part 3, which would be based on Frank Herbert’s second book Dune: Messiah.