Home Entertainment Everything we know about Black Adam 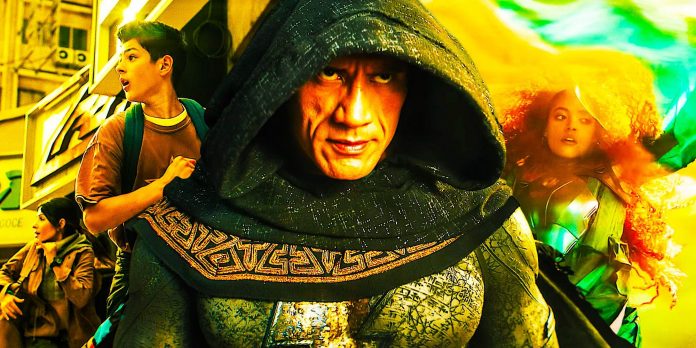 What’s the current status of the Black Adam movie? Dwayne “The Rock” Johnson has been attached to the DCEU project since 2014, but filming didn’t begin until April of 2021, due to the COVID-19 pandemic and how it continues to affect the scheduling of major Hollywood blockbusters. Here’s everything we know about Black Adam in terms of release date, casting, storyline, and more.

Black Adam will theoretically expand the DCEU by taking place in the same universe as Shazam! and Justice League. In the comics, the title character is banished by the Egyptian pharaoh Shazam and later emerges 5,000 years later for revenge. His story precedes that of Captain Marvel — otherwise known as Billy Batson — the main protagonist of the 2019 film Shazam! For years, DCEU watchers have been anxious to see a live-action version of Black Adam, an antihero character who can shuffle up the franchise power dynamics with his specific code of conduct.

There’s been plenty of Black Adam news since. In October 2020, Warner Bros. re-scheduled several DCEU films, including The Batman, The Flash, Shazam 2, and Black Adam (which was originally supposed to premiere on December 22, 2021). Finally, the film was given a concrete release date, along with some exciting news regarding the casting and the storyline. Here’s everything that’s known about the upcoming DCEU movie, Black Adam.

Black Adam’s initial release date was scheduled for December of 2021, but Warner Bros. Pictures scrapped those arrangements and left its fate hanging in the balance for quite some time. It was finally announced that Black Adam’s theatrical premiere is set for October 21st, 2022. The DCEU movie went through quite a rough time when it came to casting, recasting, and COVID-19-related issues. Still, the October release date is set in stone, and people can finally flock to the theaters to smell what The Rock is cooking.

Black Adam was dropped from Warner Bros.’ DC schedule, but the movie indeed moved forward with Jaume Collet-Serra as the director. In early September 2020, WB delayed filming until early 2021, presumably due to Johnson’s busy schedule. Filming began in April of 2021 in Atlanta, Georgia, and Los Angeles, California, and principal photography wrapped up in August of 2021 after numerous issues like Rory Haines and Sohrab Noshirvani having to rewrite the script.

Johnson will star as the title character in Black Adam, the black sheep of the Shazam family who returns home to Kahndaq after 5,000 years. Johnson’s run as The Rock in WWE cemented his place in pop culture long before crossing over into films. In recent years, he has headlined the likes of Moana, Jumanji, and Fast & Furious, as well as the HBO series Ballers.

Related: Is Black Adam Immortal? Can Anything Kill The Rock’s DC Antihero?

Noah Centineo was officially cast as Al Rothstein a.k.a. Atom Smasher. Centineo is known for starring as Peter Kavinsky in the To All the Boys movie franchise and Langston in the 2019 Charlie’s Angels update. Aldis Hodge is portraying Carter Hall a.k.a. Hawkman, previously having played MC Ren in the N.W.A. film Straight Outta Compton, James Lanier in The Invisible Man, and the titular character in the 2018 football film Brian Banks. Sarah Shahi (Chicago Fire) will play the part of Adrianna Tomaz, a University professor and resistance fighter. Quintessa Swindell (Euphoria) takes on the role of Cyclone and Pierce Brosnan will be playing Kent Nelson/Dr. Fate. Marwan Kenzari has an as-yet-unnamed role rumored to be villain Sabbac.

The San Diego Comic-Con showcased a new trailer for Black Adam, complete with a closer look at the Justice Society of America and more footage of Black Adam making things explode. The clips show Black Adam facing off against Hawkman and lamenting that his powers are a curse rather than a gift. The footage revealed that Johnson’s character has been waiting for a moment that will change “everything.” Through voiceover narration, Black Adam recalls his homeland Kahndaq as “a melting pot of cultures, wealth, power, and magic,” and he states that his community once needed a hero. The DCEU clip then reveals that Black Adam was banished after not living up to expectations, only to return 5,000 years later as a free man ready to help the dispossessed – in his own destructive fashion.

Based on everything we know about Black Adam so far, Asher Angel will not reprise his role as Billy Batson a.k.a. Shazam in Collet-Serra’s film. The narrative will instead focus on Black Adam’s rise to power and his to-and-fro with the Justice Society of America, a superhero team consisting of Atom Smasher, Hawkman, Doctor Fate, and Cyclone. No Shazam! crossover is confirmed, but given the close connections between the two characters, it’s likely that Black Adam and his descendant Batson will meet either in this movie or further along the release slate.