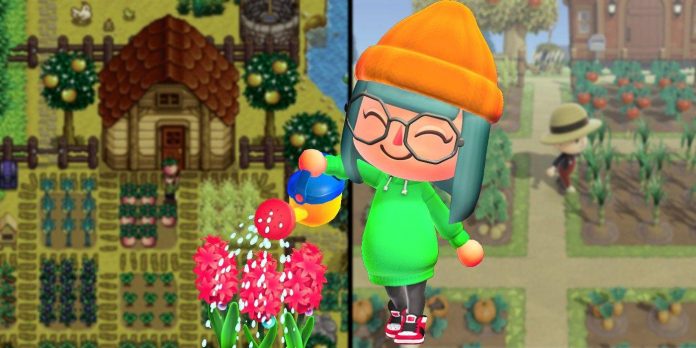 While nothing has yet been confirmed by Nintendo, there are many ideas and game mechanics that Animal Crossing can learn from Stardew Valley and take into the next game in the series for a sequel to Animal Crossing: New Horizons. While Animal Crossing and Stardew Valley have many similarities to each other, there are also differences that let them stand apart as their own respective games. Since both titles are availableon the Nintendo Switch, which title is the better option to buy on the console given their similarities is a matter of some debate.

In general, Stardew Valley and Animal Crossing give creative design freedom to players, allowing them to accomplish anything that they put their minds to. Both games rely on players to make connections with their residents, as they play a vital role in the overall gameplay experience. However, that doesn’t necessarily mean there aren’t vital game and storytelling mechanics that they can’t take and learn from each other.

In terms of replayability and longevity, Stardew Valley has Animal Crossing beat. Unless a player decides to time travel by changing the system’s date, there isn’t a lot that can be done within a single gaming session in Animal Crossing. Ultimately, there’s more to do in general on the farm, especially when it comes to socializing with the residents of Stardew Valley’s Pelican Town. Even though it’s Stardew Valley is considered to be like Animal Crossing, there’s a lot the smaller game does that Nintendo should take note of for the next animal-oriented social simulation game drops in the series.

When it comes down to making money, players, especially new ones, can have a hard time finding suitable methods of doing so. In Animal crossing, the most viable way to earn money is by utilizing the turnip prices, which can turn out to be a pain. It can take a lot of waiting every week for the selling price to be just right.

Being able to plant a variety of vegetables and fruit would be extremely beneficial in the Animal Crossing series as it provides a better outlet to earn bells at a more frequent rate. As of now, the only things one can grow are fruit trees, pumpkins, tomatoes, potatoes, carrots, wheat, and sugarcane. Making money fast in Stardew Valley is credited to the sheer amount and variety of products that players can grow and sell in an abundance.

Having multiple routes to making money would prove beneficial in the Animal Crossing series. In addition to this, it would also let players get the most out of their play sessions. Being able to create a little farm would give the newest addition a more personal feeling as well.

Character Relationships Are Much Deeper In Stardew Valley

Another thing that Stardew Valley does well is allowing for more relationship progression than Animal Crossing. Villagers don’t have any character development added to them and their conversations are dedicated to their personality type. This isn’t necessarily a bad thing, however, when a lot of the dialogue ends up repeating, it can prove to be a disappointing experience.

Animal Crossing villagers used to have more personality, but as the series went on, they became more bland and static based on whether they were jocks, lazy, and so forth. The residents of Stardew’s Pelican Town, however, are developed as though they are people players could potentially meet in real life. They have thoughts, issues, emotions, backgrounds, and existing relationships.

Allowing players to marry and have children is present in Stardew Valley, but not in Animal Crossing, for obvious reasons. Nintendo making players animals themselves or offering other humans to have relationships is unlikely, given the history of the company and the franchise, though it would still be possible to see significant changes and improvements to the way the game handles friendships with existing Animal Crossing villagers.

In Stardew Valley, there is a main narrative to follow along with, giving every resident a background of their own in “heart events”. Stardew Valley creates poignant, emotional heart event experiences that players simply can’t find in Animal Crossing. When it comes to casual simulation gaming, it can prove beneficial to players if interactions with characters can draw out emotion, something sadly lacking from Animal Crossing.

A sequel to Animal Crossing: New Horizons could add similar scenes to the game, but it would have to have storytelling that takes itself a little less seriously than Stardew Valley’s. But learning more about a villager would give players a better sense of the personality of their island or town as a whole, wherever the next game in the series may take place. Utilizing a questline mechanic would also prove to be beneficial in building relationships, giving players more goals related to fellow villagers.

But what ultimately might prove the most beneficial would be lifting the 10 villager limit in Animal Crossing, allowing more diversity in residents. It would create a more realistic feel and give a chance to have a wider variety of animals that players surround themselves with. The more villagers, the better the overall experience.

Animal Crossing Could Use A More Meaningful Endgame Experience

Both Animal Crossing and Stardew Valley have an endgame, but there’s a lot more that can be done in Pelican Town. There are a lot of characters to meet, events to encounter, places to unlock, and so much more. Just like Animal Crossing, the game technically ends when you finish the last objective, but it goes on after that.

In Animal Crossing, the endgame is essentially just players tweaking their island how they see fit and talking to villagers – beyond that, there’s very little to do. Unless someone decides to destroy their Animal Crossing: New Horizons island and start over, the endgame can prove to be lackluster and uneventful. Being able to take one of Stardew Valley’s best aspects and utilizing it well could only add to the title’s charm.

Related: How Animal Crossing Bug Off 2022 Is Different This Year

While combat isn’t present in Animal Crossing, having it implemented could be a nice change of pace, even if it were something cute and arcade-like. Being able to have another way to collect resources would be a nice bonus, or at least some activities that boiled down to something more than chopping down trees and hitting rocks. Stardew Valley is still able to retain its wholesome charm despite a variety of activities and even combat, so while Nintendo is unlikely to follow suit with Animal Crossing, it might get more creative in its endgame offerings.

When it comes down to it, Animal Crossing and Stardew Valley are both considered to be great casual simulation games, offering lots to do and a relaxing getaway from real life. Although both of these titles are popular, when players are given the option, some will pick Stardew Valley as their go-to cozy game. Hopefully, Nintendo’s next game in the Animal Crossing series won’t take New Horizons’ success as being a reason to simply make something overly similar, and put some real effort into creating a new and exciting Animal Crossing experience.

Miss Marvel: The 10 best relationships from the series