Home Entertainment Everything that Reginald Hargreaves reveals in the third season of Umbrella Academy... 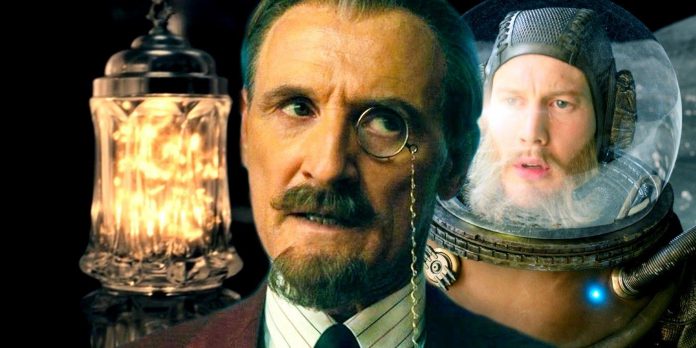 WARNING: Spoilers ahead for The Umbrella Academy season 3

Sir Reginald Hargreeves is a man of mystery in The Umbrella Academy – here are all the boxes season 3 finally ticks. Netflix’s The Umbrella Academy played its Reginald Hargreeves cards conspicuously close to the chest across seasons 1 & 2, with infinitely more questions than answers. Through clues, flashbacks and teases, The Umbrella Academy exposed Sir Reginald as an alien from a planet destroyed. He was deeply in love prior to departing, but his lover suffered some unspecified fatal sickness. At some point thereafter, Reginald came to Earth, purchased an umbrella company, and made his fortune before getting cosy with the planet’s most powerful leaders.

In 1989, Reginald Hargreeves founded the Umbrella Academy (or Sparrow Academy) and trained them into professional superheroes destined to save the world. In the Umbrella timeline, these adopted siblings became estranged and Reginald orchestrated his own death to reunite them; in Sparrow continuity, he became a drugged-up shell of his former self watching T.J. Hooker and eating ice cream. Hard to say which Reginald met a worse fate…

Related: The Umbrella Academy: Why Five Doesn’t Have A Real Name

The Umbrella Academy season 3 digs much deeper into the mineshaft of Sir Reginald’s backstory. His ultimate goal comes into view, season 1’s strange jar of lights is finally explained, and that season 2 “dark side of the moon” tease gets paid off for good measure. Plenty remains unsaid about Reggie’s alien background and bug-like biology, but the big questions surrounding his motives and presence on Earth are laid bare. Here’s every Sir Reginald Hargreeves revelation The Umbrella Academy drops in season 3.

Where Is Reginald Hargreeves From?

The biggest Sir Reginald Hargreeves query not resolved in The Umbrella Academy season 3 concerns his home world. No planet name or species is provided, nor any groundbreaking information regarding the planet’s nature or the biology of its people. The Umbrella Academy also glosses over Sir Reginald’s age and how much time passed between leaving his original world and coming to Earth. Still, season 3’s cupboard isn’t completely bare…

The Umbrella Academy adds two (admittedly small) tidbits to our knowledge of Reginald Hargreeves’ alien form. His right arm comprises a blue, tentacle-like limb with sharp barbs running all the way down. This hazardous appendage is strong enough to cleave straight through Luther, and is presumably how Reginald murdered the Majestic 12 back in The Umbrella Academy season 2. Audiences are afforded another small glimpse at the Monocle’s extraterrestrial form when Allison kills him in Hotel Oblivion. Her deadly head-slice reveals green blood and what appears to be pea-colored skin. Though the shot is brief, Reginald’s true form looks a little like an emerald version of his human face.

A final detail emerges during an apocalyptic heart-to-heart between Reginald and Number Five in which the Hargreeves patriarch remembers his planet’s destruction. Pondering whether he did “enough to save the people I love,” the alien uses “original sin” to describe his home planet’s ruination. Although Sir Reg could be talking in metaphors here (hardly out of character), the line implies he had some involvement in his planet’s decimation.

Who Is Abigail Hargreeves & Why Is She On The Moon?

The Umbrella Academy first revealed Abigail Hargreeves in season 1’s finale flashback, seemingly set during the evacuation of Sir Reginald’s home planet. A dying Abigail implored her lover to carry on living, but Reginald refused to accept their inevitable parting. The Umbrella Academy season 3 proves he stubbornly stuck to his guns. In the cold open of “Seven Bells,” Abigail Hargreeves’ deceased body is shown cryogenically frozen on the moon. After Reginald successfully resets the universe in Hotel Oblivion, Abigail is then seen resurrected by his side at Hargreeves Enterprises HQ.

Despite her human appearance, Abigail’s presence on an alien planet in The Umbrella Academy season 1 strongly implies she belongs to the same extraterrestrial race as Sir Reginald. They likely fell in love, running through their home planet’s fields tentacle-in-tentacle before Abigail became fatally sick – potentially as a result of whatever destroyed her and Reginald’s home. Refusing to acknowledge the usual rules of mortality, Reginald apparently ferried Abigail’s frozen corpse from world to world seeking a way to revive her. This planet-hopping is hinted at when Reggie tells Five that apocalypses all “run together after a while…” Eventually, the Monocle brought Abigail to Earth and stored her on the moon while he worked on a solution that would have them romantically clasping tentacles all over again.

The Umbrella Academy’s Abigail Hargreeves twist explains two key mysteries from past seasons. Shortly before the Majestic 12 massacre, the organization mentioned Sir Reginald’s “interests on the dark side of the moon.” Season 3 confirms these interests were actually Abigail and the cryogenic chamber keeping her body from rotting. The secret purpose behind Luther’s moon mission in The Umbrella Academy season 1 is also clarified. Reginald put Number One on lunar exile to watch over his precious Abigail, meaning the trip wasn’t as pointless as Luther spent the past two seasons believing. Quite why Reginald kept Abigail on the moon rather than his own mansion’s spacious basement isn’t clear. Maybe the moon was safer (the house does have an uncanny knack of getting destroyed), or Abigail’s chamber required the vacuum of space. Perhaps Reginald simply couldn’t risk his children discovering why he really came to Earth…

How Did Hargreeves Give People Powers?

Sir Reginald and Abigail Hargreeves’ aforementioned flashback from The Umbrella Academy season 1 marked the debut appearance of a strange jar containing firefly-esque lights. When Viktor resuscitated Harlan Cooper in season 2, these very same lights transferred from his body to the child’s, subtly hinting Reginald’s enigmatic jar was responsible for creating the super-powered Hargreeves siblings. The Umbrella Academy proves this theory conclusively in season 3’s opening scene. A cluster of the very same lights floats through a Korean subway train into the stomach of a young girl, who promptly gives birth to the future Ben Hargreeves. Without doubt, the Hargreeves siblings were born from alien particles (the word Reginald later uses to describe them) he released into the atmosphere. The lights drifted into the wombs of 43 mothers, and the resulting children would all be born with extraordinary (and apparently extraterrestrial) gifts.

Why Did Hargreeves Create The Umbrellas & The Sparrows?

The Umbrella Academy has thus far led audiences to believe Sir Reginald Hargreeves created his superhero teams to protect Earth from disaster. Season 3 proves that’s not entirely true. From the very beginning, Reginald’s overarching purpose has been bringing his beloved Abigail Hargreeves back to life.

Sometime prior to 1918, Reginald became obsessed with sigils and folk stories, coming to believe in another dimension he called Oblivion. According to his research, Oblivion was a fail-safe designed by whoever made the universe and contained a machine capable of resetting reality. With access to such power, resurrecting Abigail Hargreeves would be barely pose an inconvenience. The Monocle finally located a tunnel between worlds floating above a crop field, and commissioned the construction of Hotel Obsidian as a means of accessing this portal, positioning his personal White Buffalo suite adjacent to the gateway. Unfortunately for Reginald, powerful guardians protect the machine from ne’er-do-wells, and immediately after the project’s completion, he sent six mercenaries to handle Oblivion’s guardians. They failed spectacularly.

In this moment, Reginald surely realized conquering Oblivion would require not just soldiers… but superheroes. Pricey mercenaries proved no match for whatever lay beyond Hotel Obsidian’s mystery tunnel, and although The Umbrella Academy doesn’t say so outright, watching Earth’s best hunters take a bloody beating must’ve been the real reason Sir Reginald Hargreeves dedicated his life to raising a crack superhero team. The dojo training flashback of The Umbrella Academy season 3’s “Marigold” sees Reginald admit to Pogo that the Sparrow Academy’s ultimate mission is entering Oblivion. The only reason this doesn’t happen earlier is because the departing Pogo encouraged his Sparrow students to drug their father.

Since Hotel Obsidian was constructed before the timeline divergence in 1963, the Umbrella Academy must’ve also held the secret purpose of leading Sir Reginald into Oblivion. Because the Umbrellas never reached the Sparrows’ level of skill, teamwork and togetherness, however, they were never sent through the tunnel, and Pogo’s pills weren’t needed. The Umbrella Academy were spared Oblivion through their sheer incompetence as superheroes.

Why Are There Always Seven In Hargreeves’ Academy?

Defeating Oblivion’s guardians isn’t the only reason Sir Reginald Hargreeves created the Umbrella and Sparrow Academies. Through his meticulous research, the Monocle discovered activating Oblivion’s machine required seven “bells” containing the same glowing alien particles responsible for birthing the Hargreeves children. Reginald consequently needed exactly seven vessels for his firefly fuel, with each “bell” standing in the exact right place to form a sigil. This explains why he bumps off Luther and Klaus before the mission, and neatly addresses why Sir Reginald only ever adopted seven children when creating his academies – one for each bell in Oblivion.

Reginald’s seven sibling requirement retroactively casts The Umbrella Academy season 1 in a totally new light. Number Five vanished and Ben died in the original continuity, leaving five measly bells remaining. This timeline was useless if Reginald hoped to access Oblivion and create a universe where Abigail isn’t a popsicle. Having already failed, Reginald used his own death to bring the remaining Umbrella Academy members back together, and in doing so, ensured they would travel back in time and create a new history where Sparrow Reginald finally completed Project Oblivion. Suggesting the Monocle foresaw the entirety of The Umbrella Academy seasons 1-3 might be a stretch, but the idea does explain why Umbrella Reginald took his own life when Abigail was still on the moon – he was banking on his reunited children creating a do-over. To Reggie’s credit, that’s exactly what happened.