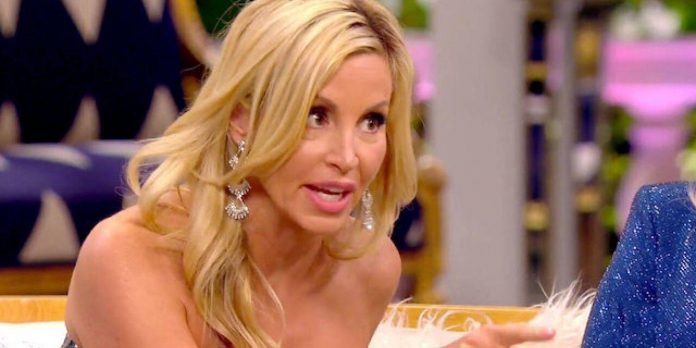 Camille Meyer (formally Grammer) may not be a housewife on The Real Housewives of Beverly Hills anymore, but that hasn’t stopped her from throwing shade at RHOBH season 12. Camille joined the inaugural cast of RHOBH alongsideKyle Richards (the only original remaining), Kim Richards, Lisa Vanderpump, Adrienne Maloof, and Taylor Armstrong in 2010. Camille quit her main role following season 2 but continued to appear as a guest or as a “friend of” throughout the years.

Although Camille was only a main cast member on RHOBH for two seasons, she has been involved in some of the show’s most iconic moments. It was at Camille’s house where viewers tuning into RHOBH season 1 met the infamous medium Allison DuBois and the “morally corrupt” Faye Resnick in the “The Dinner Party From Hell” episode. Fans may also remember cameras capturing the breakdown of her marriage to Kelsey Grammer, with Camille announcing their separation at the end of season 1, shocking her fellow housewives. Camille has returned to RHOBH as a friend to the women multiple times, with one of her last appearances on RHOBH season 9 ending with Camille storming off the reunion set while fighting with Denise Richards.

Despite Camille’s rocky relationships on RHOBH, Real Housewives fans have a soft spot for Camille and regularly ask the 53-year-old for her Bravo opinions. Camille, in return, is more than happy to oblige and has never been one to keep her opinions quiet, which has led to heaps of shade being thrown at RHOBH, especially season 12. Here are some of Camille’s most savage social media posts about RHOBH and why her opinions may not be completely incorrect.

On March 13, Camille shared an image of the original six RHOBH housewives on her Instagram with the caption, “When the show was great! It was raw with real arguments. Now it’s good but not the same.” While millions of viewers have continued to tune into RHOBH throughout the years, many longtime fans agree that RHOBH season 1 is one of the series’ best seasons. There’s no doubt that the arguments showcased were authentic to the point of being uncomfortable, such as Kim and Kyle’s shocking limo fight. Other conflicts, such as Kyle’s memorable outburst of, “You’re such a f***** liar, Camille!” share the same natural energy. Since the women all had genuine relationships before signing on to film the first season of RHOBH, comparing season 1 to season 12 indeed shows a massive difference in not just production value but how the ladies interact with one another.

Camille brought up RHOBH season 1 again shortly after RHOBH season 12 premiered on May 11. Sharing a past photo of herself on June 2, Camille threw shade at Erika Jayne with the caption, “Season 1 before glam squads and FFF.. Fox F Five. We were on our own to defend ourselves or I was. Nobody fought my battles except me.” Camille then seemed to refer to Erika’s defensive behavior during the season 11 reunion with, “Didn’t need a team there. No puppets at the season 1 reunion.” Erika’s admission of spending $40,000 a month on her glam squad has angered a lot of fans since RHOBH season 6, especially since she recently refused to downsize on season 12 despite being named in a million-dollar lawsuit. Viewers also voiced their displeasure with the women not questioning Erika hard enough during RHOBH season 11 and agreed that if Erika had been on any other Real Housewives franchise, the 50-year-old would have been incessantly grilled over her financial and legal affairs.

The first episode I watched was this past weeks. I thought it was ok. I feel like Crystal is working too hard on a storyline for herself.

It took a few weeks for Camille to start tuning into RHOBH season 12, but once she began watching alongside viewers, she was quick to give her opinion. When asked by one Real Housewives fan what she thought of season 12 so far, Camille stated that the season was simply “okay,” and commented, “I feel like Crystal is working too hard on a storyline for herself.” While Crystal brings a new POV to RHOBH as the series’ first Asian-American housewife, fans have been criticizing her for similar reasons as Camille since her season 11 debut. While Crystal and Sutton Stracke’s feud has continued from season 11 into season 12, there isn’t much else going for Crystal and her position on RHOBH besides their arguments.

Camille’s impression of Crystal isn’t getting any better as RHOBH season 12 continues to unfold. In fact, Camille hasn’t just called out Crystal’s storyline for being forced but for also being boring. Following episode 6 of the newest season, which aired on June 15, Camille tweeted, “Boring Crystal storyline.. ugh. Reaching for a storyline.” While Crystal and Sutton argued throughout RHOBH season 11 due to a racial misunderstanding, the duo have continued to be at odds during season 12 over a reported “dark” comment made by Sutton that was not shown last season. Fans are quickly becoming bored of Crystal and Sutton’s feud, especially because Crystal refuses to divulge Sutton’s exact comments. Although viewers may eventually hear the exact details of Sutton’s “pool story,” many are beginning to think that the storyline is becoming too drawn out.

I think she’s so boring. She is cute but insufferable.

Crystal isn’t the only RHOBH season 12 housewife on Camille’s radar, either. Shortly after Camille called Crystal boring, Camille was asked by another Real Housewives fan if she believed the circumstances behind Dorit Kemsley’s October 2021 robbery, which has been a focal point of season 12. Instead of answering the question about Dorit’s home invasion, Camille revealed what she thought of Dorit personally. “I think she’s so boring,” Camille replied, adding, “She is cute but insufferable.” Viewers have had an up-and-down relationship with Dorit since she first appeared on RHOBH season 6, with her unique accent coming into question multiple times. While some find Dorit to be sincere and creative, others, like Camille, find her annoying. Many fans tuning into RHOBH season 12 have even been questioning whether Dorit’s home invasion was staged. RHOBH season 12 has a long way to go, but if Camille’s shady social media posts are anything to go by, this Real Housewives installment may see its downfall quicker than it thought.

The “Mission Impossible 8” director has shared a stunning new stunt...