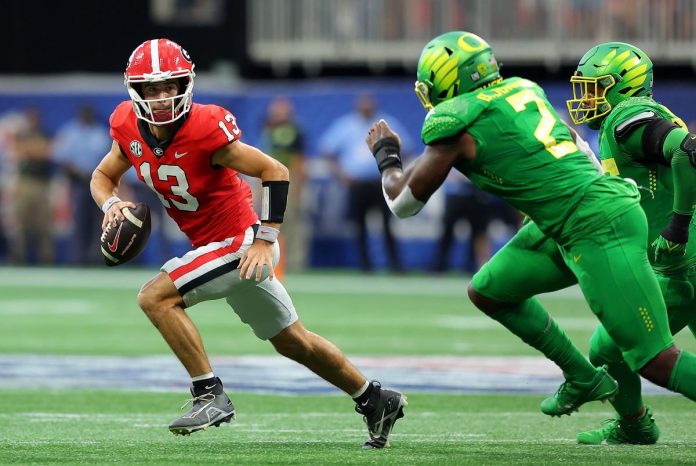 Head coach Dan Lanning and the then No. 11 Ducks opened their season with an ugly first-week loss to the then No. 2 Georgia Bulldogs — falling in a massive 49-3 blowout.

Given Oregon’s dominance over a top-15 team this afternoon, everyone confirms that No. 1 Georgia is the real deal.

“Oregon’s first-team offense has scored 13 straight goals since they went without a touchdown against Georgia in week one. They scored 7 touchdowns in a row against Eastern Washington in the second week before they were pulled, and now today against No. 12 BYU, they scored six in a row,” noted college football analyst Matt Prem.

The Bulldogs started the 2022 season the same way they started their 2021 national Championship campaign. In the first three games of the year, Georgia’s defense scored just 10 points. They allowed their first touchdown of the year in today’s 48-7 win over the South Carolina Gamecocks.

Oregon transfer defender Bo Nicks was thrown into the fire in the season-opening match against the Bulldogs. He seems to be settling down today, throwing for 212 yards and two touchdowns in a 12/15 pass against BYU.

With today’s expected win, the Ducks’ record will move to 2-1.