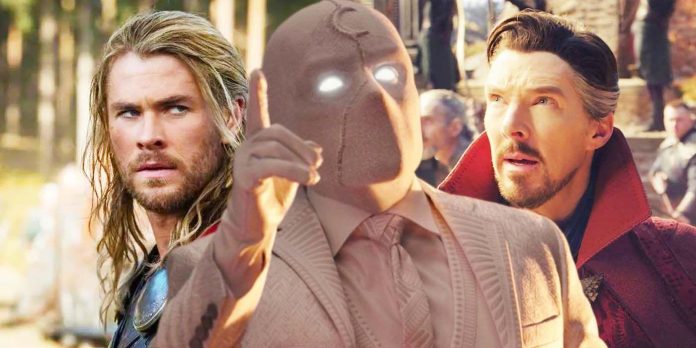 Disney+ includes an option to view every MCU film in chronological order – but unfortunately its version of the MCU timeline doesn’t quite work. Most viewers tend to watch the MCU in release order, so they can see how the narrative expands and the shared universe grows. But others have always been interested in watching the MCU in timeline order, eager to experience the story in a different way.

The problem, of course, is that the MCU jumps around the timeline with impunity – and Phases 3 and 4 have been particularly notable for doing so. A major continuity error in Spider-Man: Homecoming led Marvel Studios president Kevin Feige to promise a timeline of some kind back in 2017. That promise was finally fulfilled after an update to the Disney+ streaming service, which unveiled an option for viewing the MCU in chronological order; this is generally viewed as the definitive MCU timeline. Unfortunately, this timeline is deeply flawed, with particular problems in Phase 4.

Related: Krysten Ritter’s Jessica Jones Is The 1 Defender The MCU Can’t Bring Back

Part of the problem, of course, is that the MCU timeline is – by necessity – dynamic and ever-changing. The Disney+ MCU timeline fixed some issues, notably with Thor: The Dark World and Black Panther, but whoever set those up had the benefit of years of fan discussions to draw upon when the placement was decided. New releases are much trickier to determine, especially given the sheer amount of content Marvel is releasing in Phase 4. The Disney+ timeline is something of a mess, resulting in major problems.

The first problem is that the MCU timeline breaks Agents of SHIELD, the legacy Marvel Television TV series that was designed to tie into the shared universe. The new timeline switches the order of Thor: The Dark World and Iron Man 3. This is actually a smart call from the perspective of the films themselves because it means viewers watch Iron Man 3 a little later, and it seems to imply Iron Man has struggled with PTSD for a year after the events of The Avengers. Unfortunately Agents of SHIELD season 1 featured explicit nods to Iron Man 3 and Thor: The Dark World in release order, so this decision directly contradicts the previously-established continuity. To be fair, it’s unclear how much Marvel Studios care about Agents of SHIELD’s timeline; the jury is still out whether it should even be considered canon in the first place, and it’s noticeably absent from the official Disney+ MCU timeline. Still, the contradiction makes it clear this is just one possible timeline and is further evidence that even Marvel’s own approach to the timeline has changed over the years.

Black Widow caused further problems. The film was an odd one, launching Phase 4 even though Black Widow fits better in Phase 3. Until Black Widow, every solo MCU movie had oriented itself around the latest major event, but Black Widow jumped back in time and centered itself around the passing of the Sokovia Accords (Phase 3) rather than the Avengers’ victory over Thanos (which set up Phase 4). Whoever was initially responsible for the MCU timeline on Disney+ was clearly confused, originally placing Black Widow after Black Panther – even though the former launches straight out of Captain America: Civil War, whereas the latter is a week later. This may seem like a quibble – the order doesn’t really change the narrative at all – but it’s interesting to note precisely because Disney went back and fixed it. The order was switched, a tacit acknowledgment it had initially been incorrect.

The next problem is with Shang-Chi & the Legend of the Ten Rings. In truth, Shang-Chi’s internal timeline is broken – it works on the macro level, but the details are problematic – and the Disney+ timeline at least settles on the year 2024, which is probably correct. The problem, however, is that Disney+ puts it in the wrong place in relation to The Falcon & the Winter Soldier. The Chinese festival of Qingming is on April 4, 2024, so Shang-Chi must be set in late March to early April 2024. Meanwhile, The Falcon & the Winter Soldier can be precisely dated as running from April through to May; it’s set eight months after the Avengers defeated Thanos in Avengers: Endgame, and that’s been stated (numerous times) as taking place in October 2023. Shang-Chi should come first – but it doesn’t.

The latest problem is with Doctor Strange in the Multiverse of Madness, which has been placed ahead of Hawkeye on the Disney+ MCU timeline. This can’t possibly be right, because both have a explicit connection to Spider-Man: No Way Home. That film – which isn’t currently on Disney+, due to distribution rights sitting elsewhere – shows the Statue of Liberty updated with Captain America iconography, and Spider-Man swings past the Christmas tree at the Rockefeller Center. The Statue of Liberty works are referenced in Hawkeye, and the final battle actually takes place around that Christmas tree. So those two must be set at the same time. Doctor Strange in the Multiverse of Madness explicitly claims to be some months after Spider-Man: No Way Home, meaning it must also be months after Hawkeye. The Disney+ timeline, of course, places it before Hawkeye – clearly incorrect.

Moon Knight Should Be Placed Earlier In The MCU Timeline

The final issue is with Moon Knight, with nobody at Marvel seeming entirely sure where this was going to fit into the MCU timeline. Explicit references were deliberately stripped out to leave it vague, but ironically Moon Knight’s timeline can be deduced from the phases of the Moon. These correspond with a date range specified in the Disney+ TV show, allowing viewers to establish that it takes place between June 6 and June 16, 2024. Unfortunately, the Disney+ timeline places it after Hawkeye, meaning it is considered to take place in 2025. This is probably the least problematic of the various Disney+ timeline errors, simply because precious few viewers are going to pick up on the phases of the moon.

It’s true most of these issues are still relatively minor. Still, the fact that they exist – and, even more, that Marvel keep making small adjustments to the timeline, fixing issues – suggests the Disney+ timeline should be seen as definitive. It’s a best guess, probably put together by somebody in the Disney+ marketing team rather than by Marvel Studios themselves. Viewers would be wise to consider the precise MCU chronology debatable, in spite of this timeline’s existence.

The Witcher Season 2: Kristofer Hivju Shares How He Became Nivellen