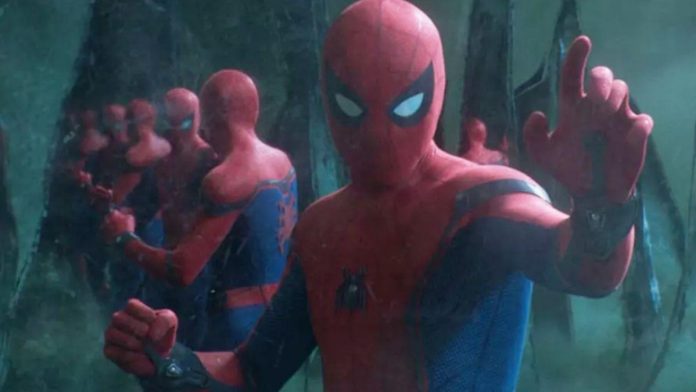 I grew up with the belief that Spider-Man was the one superhero with the most ill-fitting costume, particularly because I had never seen an arachnid that was blue and red. That was, until just a few minutes ago when I looked up “red and blue spiders” and actually found a couple of species that definitely help make sense of co-creator Steve Ditko’s choice for the Marvel hero’s traditional color scheme. Of course, not all Spider-Man costumes bear that same iconic look and I might even argue those tend to be the more memorable selections.

Yet, as many fans may agree, the way something is depicted in a comic book does not always translate to the same degree in a cinematic adaptation, which could be for the better or, unfortunately, the worst. Either could be the result of even the slightest alteration from the original costume design, such as changing the blue areas on Spider-Man’s suit to black, giving him yellow eyes instead of white, or even adding a distracting silver belt with a matching bracelet.

We will dig deep into why those little details may or may not have worked for their respective Spider-Man costumes, and the rest as well, in our breakdown of every costume donned by Peter Parker in a live-action adaptation to date, as well as one other individual famous for holding the moniker. Based on the criteria of comic book accuracy, uniqueness, practicality, and straight-up badass appeal, this is my personal ranking of the following 14 Spidey suits from movies and television in ascending order.

Rule Number One of superhero costume design on Hollywood sets should be to avoid resembling what you would find at a Halloween store. Unfortunately, that’s just how I see the suit that Once Upon a Time in Hollywood actor Nicholas Hammond wore on The Amazing Spider-Man TV series from 1977 to 1979 with the loose-fitting fabric, crudely printed web pattern, and mesh eye lenses that look impossible to see through. The unnecessary silver belt and matching, web-shooter bracelet do not help either.

While this costume from the uproariously campy Japanese Spider-Man series from the late 1970s thankfully ditches the ridiculous silver belt, that is about all of the praise I personally can give it. Otherwise, this suit – which Shinji Todo’s Takuya Yamashiro actually keeps stored in his even more ridiculous bracelet – suffers from the same problems as his American TV counterpart. To be fair, though, watching him change into the outfit is an irresistibly funny sight and the suit’s campiness is just one reason I look forward to the character’s upcoming appearance in Spider-Man: Across the Spider-Verse.

Speaking of irresistibly funny sights, I have Peter Parker’s first attempt at a “supersuit” in the premiere installment of Sam Raimi’s Spider-Man trilogy ranked this high for the laughter it brings. Comprised of a cheap ski mask, the eight-legged insignia sprayed on a red sweatshirt, racing gloves, and blue sweatpants, Tobey Maguire’s hero-in-training has his heart in the right place here and shows it by defeating wrestler Bonesaw (Macho Man Randy Savage) in the ring. However, he forgot to hide his eyes.

Speaking of hiding your eyes, that is why the scrappy little outfit that Tom Holland’s Spider-Man wore before receiving (and after losing) an upgrade from Tony Stark (Robert Downey Jr.) has an edge over Tobey Maguire’s makeshift get-up in his first solo movie. The goggles Peter Parker builds into his ski mask are the perfect touch to his combination of a spray-painted hoodie vest, a full-body sweatsuit, and knee-high socks that are red and blue in (almost) all the right places. Not to mention, his web-shooters are, thankfully, far more discreet than either live-action costume from the 1970s.

The web-shooters on Andrew Garfield’s costume from 2012’s The Amazing Spider-Man are even less noticeable, but what really sticks out about the ensemble visually are his yellow eye-lenses that, for some reason, I was always hung up on. Otherwise, it is a really slick-looking outfit with a web pattern that, instead of the traditional black color, blends in uniquely with its unusually bright shade of red. To be honest, that is another thing I have a slight issue with, but, thankfully, that was fixed in the sequel… which we will get to later.

Where do we start with Peter Parker’s little gift from Tony Stark, which debuted in Captain America: Civil War before we learned all (or, perhaps, most) of what it was capable of in Spider-Man: Homecoming? Save for some minor alterations, Tom Holland’s main suit is just what the Marvel purist ordered, from the more simple chest emblem (also a detachable drone) to the expressive eye lenses, which was unprecedented for any live-action Spidey iteration. Its countless other features are just a gold cherry on top, including a built-in AI Peter calls “Karen” and an Instant Kill mode that Peter was initially hesitant about… which we will dial back to soon.

For as much love as I have for Peter Parker’s decked out red and blues in Spider-Man: Homecoming, I think the costume I would rather borrow is his stealth suit (or, as we will forever refer to it as, the “Night Monkey” costume), which he requested from Samuel L. Jackson as “Nick Fury” (or so we thought) to better protect his identity while abroad in Spider-Man: Far From Home. From the slick, espionage-ready design and the amusing flip-up eye lenses, I actually would have been satisfied if this was the closest we ever got to seeing Tom Holland in the famous black suit.

As it turned out, the Night Monkey get-up was not the closest we ever got to seeing Tom Holland in the black suit, because a new and arguably more clever take on the famous outfit would appear in 2021’s Spider-Man: No Way Home. After his regular red and black outfit (which we will get to soon) gets stained by green slime, Peter decides, instead of taking the time to scrub the mess off, to turn the suit inside out – revealing a complex assortment of wires and computer chips amid a strikingly unique gold webbing pattern on a black background. This was a brilliant way for the Home Trilogy to hint at the black suit again without involving the Symbiote… which would make a mid-credits cameo, however.

One essential reason why I am satisfied with the Night Monkey outfit and the inside-out black and gold suit is that I personally believe Spider-Man 3 pretty much nailed the black suit already (and is, probably, the one thing they did right, if you ask me). While it is a drastic deviation from the comics (solid color with a large, white spider emblem) and – to be frank – is just Tobey Maguire’s original costume dyed black, call me crazy, but I think the approach works perfectly for cinema and makes all the suit’s best design features really pop out. Think of it as another example of why they say almost any photo looks better in grayscale.

Most people would also agree that practical effects look better than CGI, especially with superhero costumes (i.e. Ryan Reynolds’ Green Lantern suit). However, it is easy to forget that Tom Holland is not actually wearing the metallic Iron Spider suit, which saw its maiden voyage in Avengers: Infinity War, because it looks so freaking cool. In addition to being yet another improvement on its comic book origin (in my opinion) with its large blue spider emblem, glowing eye lenses, and retractable spider legs, I would say the MCU’s Spider-Man has never looked more fly, but that would be unfair to my preferred Holland outfits over this one, which will each show up soon.

The suit that Andrew Garfield wore in the first installment of The Amazing Spider-Man movies most definitely gets an A for effort to try something new, but what I love about his outfit in the 2014 sequel is how it goes back to basics. By combining elements from the source material (especially in the white, buggy eyes) with that of the best cinematic designs to precede it (so, the Tobey Maguire suit), I would call this Spider-Man costume a near perfect marriage of those two worlds.

While Andrew Garfield’s second Spider-Man costume does right by what it borrows from, Tom Holland’s replacement for his destroyed main suit (created by Peter Parker himself) in Spider-Man: Far From Home is an equally brilliant example of how to change things up. It may incorporate most of the same elements of the Tony Stark design, but substituting the traditional blue for black is a striking change that instantly solidified this as one of the coolest Spidey suits in history.

On second thought, seeing Tom Holland’s Peter Parker go back to basics (and I mean all the way back) at the end of Spider-Man: No Way Home was an unexpectedly and extremely gratifying sight to behold that tops anything else we have seen him wear. With his identity magically concealed again, Peter strips himself of the Tony Stark-bred technology of his other suits and sows together a new outfit that brings back the blue, but now with an unprecedented shiny finish. I like to think that the new, homemade suit’s shine symbolizes hope for this hero’s bright future and for the future of the franchise going forward.

Because Sam Raimi’s Spider-Man was a game changer for comic book movies in 2002, it was only appropriate that Tobey Maguire’s suit would be a game changer for costume design in comic book movies. Other than the traditional red and blue, its anatomically correct front and back spider emblems, platinum webbing, and the meanest-looking eyes Spidey has ever had made this suit a true original that never needed an update in subsequent installments and has never been duplicated to the same standard, as far as I am concerned. You can say what you want about how Maguire acted as Peter Parker, but you cannot deny that he looked good doing it.

You know, you would think that seeing Tobey Maguire, Andrew Garfield, and Tom Holland standing together side-by-side in Spider-Man: No Way Home would have made it easier to choose between their suits. On the contrary, it made it a bit more difficult. I guess there is not much else to say about that than fighting crime has rarely looked better than it does on Peter Parker, no matter who is playing him.

What if Iron Man hadn’t been able to take the Infinity...