Home Entertainment Every quest proving that Skyrim is a horror game 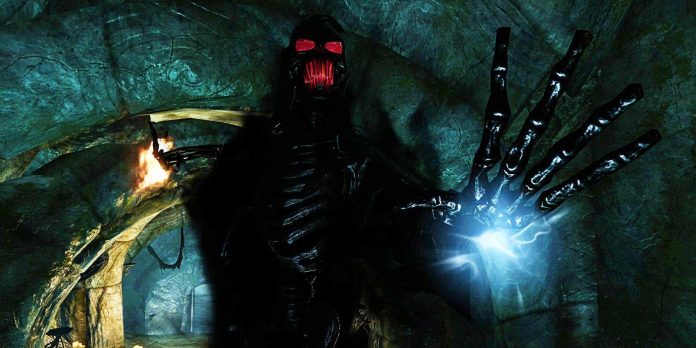 Skyrim is best known for its fantasy elements, open world, and dragon fighting, but there are plenty of side quests that prove Skyrim is really a horror game if you strip enough layers off the top. The game may have important quests about stopping a dragon or joining a side in a civil war. But a world-ending dragon and civil unrest are not the scariest encounters that haunt the game.

Many fantasy worlds have monstrous entities and creatures lying under the surface of the story, and Skyrim is no different. Ghosts, undead, vampires, and werewolves prowl the wilderness and lurk in the darkest caves. Some are not a threat to the Dragonborn, but others desire to kill any Skyrim Nord or Non-Nord Dragonborn, or really any other innocent passersby just for the sport.

Related: How Skyrim’s Thalmor Tricked The Khajit Into Fighting The Empire

There are locations in Skyrim that give off horror vibes. Morthal and the surrounding area is one example, along with any dark cave or creepy fortress. However, there are specific quests that remind the player there are horror aspects of this game, and not all these quests occur in creepy areas like Morthal.

“The Break of Dawn” is a quest many players find early in the game by either stumbling upon Meridia’s Beacon when they reach level 12 or by first approaching her temple. It is a simple quest, with delivering the beacon and defeating the enemies in the temple. But because this one is a part of the library of Daedric quests in Skyrim, it’s expected to get a little creepy. The temple is taken over by a necromancer and his summoned shades. While the necromancer may not be particularly scary, though he can be a tough opponent, it’s the shades who are creepy. They have piercing red eyes and black wispy bodies. Their physical characteristics are a terrifying contrast to the usual ghosts and draugr the Dragonborn encounters.

“Laid to Rest” takes place in the town of Morthal. When the quest begins, a man in the town is suspected of killing his wife and child to be with a different woman. However, the quest takes a turn when it is revealed vampires are behind the murders and trying to take over the town. This quest gives the Dragonborn the chance to become a vampire in Skyrim.

The vampires are not a rag-tag bunch of nobodies. They are relatively organized and could have potentially taken over the town if it was not for the Dragonborn. There are a couple of scarier moments during the quest. The first is that the vampires have begun to infiltrate the town. While the second is the cave the other vampires are hiding in. It is a large cave system, with many powerful vampires, and graves where they are burying their victims.

“The Taste of Death” is first encountered in Markarth, debatably the worst city in Skyrim. This quest may leave players feeling queasy and gross depending on their choices because this quest gives the Dragonborn the option of becoming a cannibal. The beginning of the quest takes place in Markarth’s Hall of the Dead where they will encounter an NPC named Eola. As the quest progresses, it is revealed Eola is a cannibal and a worshipper of the Daedric Prince Namira. And the Dragonborn has the chance to join the cult and become a cannibal themselves. This is a quest that may leave players with a queasy stomach and an odd taste in their mouth.

Murder Is Afoot In Skyrim’s ‘House Of Horrors’

“The House of Horrors” is another creepy quest that rewards the Dragonborn with Skyrim’s Mace of Molag Bal. It begins in Markarth when a Vigilant of Stendarr asks the Dragonborn for help with removing a Daedra from a home. The quest becomes very serious when the Daedra haunting the home, Molag Bal, tells the Dragonborn to kill the NPC. After the command, the house begins to shake while the lights flicker, and the chairs even stack themselves up on a nearby table. The house and Molag Bal are reminiscent of a traditional horror movie where a house is haunted by a demon.

“Innocence Lost” is another quest that may leave the players feeling uncomfortable. This quest will take the Dragonborn to Windhelm were a boy, Aventus Arentino, is trying to summon the Dark Brotherhood. He assumes the Dragonborn is part of the guild and asks them to kill Grelod the Kind in Riften. Fulfilling Aventus’ contract is how to join the Dark Brotherhood in Skyrim.

Related: The Skyrim Race You Need To Play Before Elder Scrolls 6

This quest doesn’t feature supernatural entities or Daedra, but something about a boy asking for someone to be killed is immediately unsettling. This is enhanced when the Dragonborn finds him surrounded by body parts and performing the Black Sacrament. The player may not feel bad for killing Grelod the Kind; she is a cruel person. But knowing it was a child who asked for her death may leave the player with a bitter taste in their mouth.

Serial Killer In Skyrim’s ‘Blood On The Ice’

“Blood on the Ice” is about a serial killer called The Butcher loose in the city of Windhelm. They are murdering and butchering women, leaving their bodies throughout the city for the residents to find. While the least interesting civil war in Elder Scrolls continues to rage, it’s up to the Dragonborn to stop the murderer.

The Dragonborn has multiple paths to take in this quest, with a couple of different NPCs who are suspects. No matter what, though, this quest is a scary one. For some players, this quest and The Butcher resemble a real-life crime drama with a dash of necromancy. Perhaps the most unsettling part is how the guards have excuses for not capturing the killer and how only one person other than the Dragonborn is pushing for The Butcher to be caught.

“Frostflow Abyss” is a miscellaneous quest activated when the Dragonborn enters the Frostflow Lighthouse. Because entering the lighthouse is required, “Frostflow Abyss” is a hidden quest in Skyrim players may miss if they’re not looking carefully. Inside the lighthouse, the Dragonborn finds evidence of a struggle. Blood is splattered on the walls, and the remains of a woman are found in the middle of the floor with a Falmer ax buried in her chest.

As the Dragonborn investigates the disappearance of the family, they head underground and encounter Falmer and chaurus reapers before eventually stumbling upon the remains of the family. This is a sad quest because the family was minding their own business, seemingly happy with their new lives, and it reminds players that the Dragonborn may be the powerful hero of Skyrim, but they cannot save everyone.

Johnny Depp’s lawyer Camilla Vasquez is promoted to partner of the...

Mike Wheeler and the Eleven: Then and Now – How Finn...