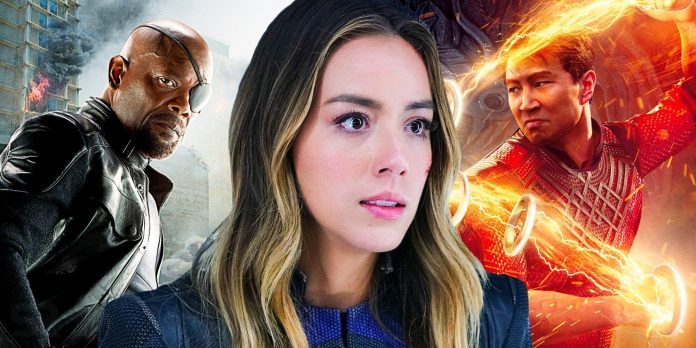 Chloe Bennet’s Daisy Johnson was the breakout character from Agents of SHIELD, and here is every Marvel Cinematic Universe Phase 4 movie and TV show Quake can return in. Throughout seven seasons, the show transformed Daisy Johnson from a computer hacker recruited by SHIELD to one of the agency’s top agents and a powerful superhero thanks to her Inhuman powers. Marvel viewers have been left waiting since Agents of SHIELD season 7’s ending in 2020 to learn if Chloe Bennet will return to the MCU as Quake.

Marvel Studios has not announced plans to incorporate characters from Agents of SHIELD into their movies or Disney+ shows. While it long seemed unlikely that this will change due to the continuity questions an Agents of SHIELD crossover will raise, the MCU has started referencing Marvel TV’s past work. It began with Agent Carter’s Jarvis actor James D’Arcy appearing in Avengers: Endgame. Audiences have since seen Daredevil stars Charlie Cox and Vincent D’Onofrio return as Daredevil and Kingpin, in Spider-Man: No Way Home and Hawkeye respectively. Doctor Strange in the Multiverse of Madness even included a surprise cameo from Inhumans’ Anson Mount as Black Bolt.

If all of these Marvel TV actors can return to the MCU, it might only be a matter of time before Chloe Bennet’s Quake is back. There has been plenty of speculation that this is happening in Phase 4, especially after Bennet dropped out of The CW’s Powerpuff Girls live-action show. Agents of SHIELD is still very popular on Disney+, and an appearance by Quake in a Phase 4 MCU movie or show could ensure that remains. Let’s not forget how Daredevil’s viewership spiked after Spider-Man: No Way Home and Hawkeye. With a full slate of confirmed upcoming projects, here is every MCU Phase 4 movie and TV show Chloe Bennet’s Quake can return in.

Quake’s MCU return could happen in Shang-Chi 2. Interest in seeing a Quake and Shang-Chi crossover increased after Chloe Bennet shared a photo of her and Simu Liu hanging out. She reminded everyone that Daisy Johnson was the MCU’s first live-action Asian superhero. The fun comment came after Shang-Chi and the Legend of the Ten Rings was praised for giving Marvel Studios an Asian-led superhero movie. Viewers of Agents of SHIELD know that Quake has been a superhero since 2015, but Shang-Chi 2 would be the perfect opportunity to let the two popular Asian superheroes team up.

There are not many details known about Shang-Chi 2 at this time, only that director Destin Daniel Cretton is returning. Since the original Shang-Chi post-credits scenes set up the search for more information on the powerful Ten Rings artifacts and the return of Xialing’s Ten Rings, both of these storylines should continue in the sequel. Quake could factor into both potentially. It was teased that the Ten Rings have a beacon that could bring an extraterrestrial threat to Earth. Daisy Johnson was last seen in space in Agents of SHIELD, so she could encounter the rings’ original creators or even detect the beacon herself. Meanwhile, if the sequel pits Shang-Chi against Xialing’s Ten Rings organization, he will need some additional help to fight them all. Quake would be a formidable partner in that regard.

There has been no shortage of rumors that Chloe Bennet’s Quake will be in Secret Invasion. Since the upcoming MCU Disney+ show focuses on Nick Fury (Samuel L. Jackson) and the Skrulls, it has been theorized that Daisy Johnson could be with them. The end of her story in Agents of SHIELD sets up joining Fury in space quite nicely. She could then return to Earth to save her home planet from the shape-shifting aliens or even battle the Kree again if Secret Invasion continues flipping expectations. It would also be a chance for Nick Fury to see just how far Daisy Johnson came from when he first met her. The Agents of SHIELD star has denied her MCU return in the Disney+ series at every turn. However, Andrew Garfield lying about not being in Spider-Man: No Way Home could mean Bennet is also not telling the truth to preserve her surprise appearance.

Marvel Studios could also have Quake’s MCU return happen in The Marvels. The Captain Marvel sequel stars a trio of powerful female Marvel heroes, Captain Marvel (Brie Larson), Monica Rambeau (Teyonah Parris), and Ms. Marvel (Iman Vellani). The latter’s Disney+ show was previously considered an excellent place for Daisy Johnson to appear. Still, the mystery of Kamala Khan’s powers means the Inhumans’ connection could be severed or delayed. If The Marvels is where Kamala Khan’s Inhuman powers are confirmed, it would be great to see Quake appear and provide some additional explanations. This could even lead to Quake joining Captain Marvel, Monica Rambeau, and Ms. Marvel for a mini female Avengers team-up moment.

Bringing Quake to the MCU could reveal new details about her, including her powers and equipment. This could include Daisy Johnson returning in Armor Wars as part of a surprise Tony Stark connection. After Daisy went through Terrigenesis, her quaking powers became so strong that they would fracture her bones. This led Fitz and Simmons to develop a pair of gauntlets that Daisy used to control her powers. The technology behind Quake’s gauntlets was never revealed, but her return in Armor Wars could make it known that they have Stark Industries tech. The Disney+ show starring War Machine (Don Cheadle) adapts the comic story where Iron Man’s technology is stolen, and he searches for everyone using his inventions. War Machine could find a trace of Stark tech in Quake’s gauntlets and search for her to ensure she isn’t using them for evil.

A dream scenario for Quake’s MCU Phase 4 return for many Agents of SHIELD viewers would be to see her appear in Avengers 5. The aftermath of Avengers: Endgame has left the Avengers’ roster in a completely different state, with the actual members of the team often up for debate. Marvel Studios has not announced plans for Avengers 5 yet, but it is expected that heroes like Sam Wilson’s Captain America (Anthony Mackie), Shang-Chi, Doctor Strange (Benedict Cumberbatch), and Captain Marvel will be involved. There is also the opportunity for newer heroes like She-Hulk, Moon Knight, and Wonder Man to join as well. It would be quite exciting if Quake managed to join the Avengers in the MCU, just as she has done many times in the comics. Furthermore, it would allow the new version of the team to include a strong connection to how the original team came together after Loki killed Phil Coulson (Clark Gregg), who mentored Quake after returning from the dead.