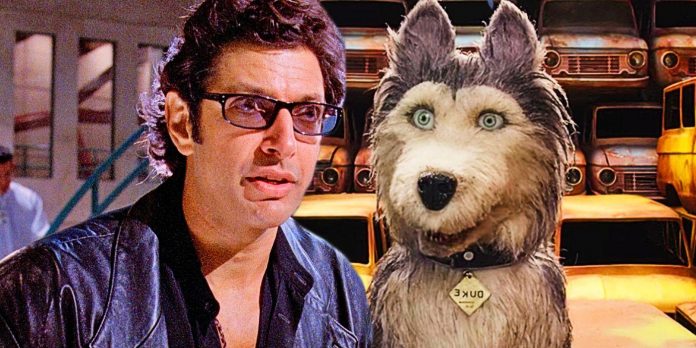 The always interesting Jeff Goldblum returned to the world of sci-fi in Jurassic World: Dominion, but he’s never spent very long away from the genre. Now in his 60s, Goldblum has successfully maintained a career as a high-level Hollywood actor for more than 30 years and shows no signs of fading away anytime soon. Possessing one of the most unique voices and set of physical mannerisms ever seen on film, Goldblum is an actor who mostly plays a version of himself, but that self is so interesting that most people do not mind.

Even when playing a villain, Goldblum rarely raises his voice and never really feels the need to yell to get his point across. Jeff Goldblum’s soft-spoken and often meme worthy nature tends to make what comes out of his mouth feel all the more impactful, especially on the occasions he seems outright agitated. It is arguable, though, that all of Goldblum’s best performances have taken place in the sci-fi realm, from Ian Malcolm in Jurassic Park to Seth Brundle in The Fly and even the delightfully evil Grandmaster in Thor: Ragnarok.

With his reprisal of Malcolm in Jurassic World: Dominion, Jeff Goldblum returned to perhaps his most iconic sci-fi role, but there is definitely competition for that title that lends itself to ranking Goldblum’s sci-fi movie outings. As such, here’s every Jeff Goldblum sci-fi movie ranked worst to best, based on both movie quality and with special consideration to Goldblum’s performance and presence within the film itself.

Powder was a box office success in 1995, but is much less known today, likely due to it being so hard to uncouple from Jeepers Creepers director Victor Salva, a convicted child predator. For his part, Jeff Goldblum’s acting abilities are probably the best thing in the movie, a story about a man with unusual abilities that is shunned by society that can almost be interpreted as a bizarre reflection of Salva’s view of himself. As such, Powder is far from essential viewing.

It is a close race in the disappointing return to a classic Jeff Goldblum role between Independence Day: Resurgence and the next entry in this ranking. In both cases Goldblum’s performance is not the problem, as he tries his best, but the story and new characters populating it are just hopelessly bland and uninteresting. Resurgence feels like a truly soulless cash grab, one which actually did not work, as box office profits sank.

Audiences waited for a long time to see all three of Jurassic Park’s lead legacy characters reunited, and it is fun to see them interact – but that is sadly one of the few things Jurassic World: Dominion has going for it. The plot the movie offers about corporate espionage and locust swarms is far from what most expected, and left many audience members outright bored. Still, Dominion isn’t an unloved film, judging by the high box office receipts.

Hotel Artemis is a movie with so much potential, boasting an intriguing central premise of a secret hospital for criminals, as well as a stacked ensemble cast. Jeff Goldblum works alongside people like Jodie Foster, Sterling K. Brown, Zachary Quinto and Dave Bautista. The final product is a mixed bag, with some good elements but not enough to really save it, although the cast does well as one might expect with what they are given.

While flawed and sometimes sad, Jurassic World: Fallen Kingdom had some points that worked in its favor. What places it so low in a Jeff Goldblum-specific ranking is that his return as Ian Malcolm is basically nothing more than an extended cameo. His speech at the end about humans and dinosaurs coexisting is actually amusing in hindsight, since Jurassic World: Dominion mostly ignored that plot in favor of locusts.

Earth Girls Are Easy reunites Jeff Goldblum with Geena Davis, his co-star in The Fly, and by that point real-life wife. Like the next entry in this ranking, Earth Girls Are Easy was a financial failure, but has since amassed a cult following. It is an extremely silly story about three aliens looking to get some action on Earth, but is also a light and breezy watch. Also notable are early movie roles for Jim Carrey and Damon Wayans.

8. The Adventures of Buckaroo Banzai Across the Eighth Dimension

A box office bomb upon release in 1984, The Adventures of Buckaroo Banzai Across the Eighth Dimension is essentially a send-up of sci-fi movies, but has gained a cult following due mostly to how relentlessly bizarre it is. Actor Jeff Goldblum appears in the supporting role of New Jersey, who is both a neurosurgeon and a cowboy complete with hat. Buckaroo Banzai is not for everyone, but those who love it tend to really love it.

Being an animated picture with an ensemble voice cast, Wes Anderson’s critically beloved Isle of Dogs is not really a showcase for Goldblum in particular, but he does as well as anyone else in this truly unique and visually stunning film. Isle of Dogs is set in a future where an outbreak of canine flu has seen dogs exiled to the titular island. As part of Isle of Dogs’ amazing cast, Jeff Goldblum voices a dog named Duke that loves sweets, much like his former master.

The Lost World is a steep drop in quality from Jurassic Park, but it is also a bit underrated, and provides a thrilling and mostly satisfying trip back into the world of dinosaurs. Front and center is Goldblum’s return as Ian Malcolm, and while the character is portrayed a bit differently, he is still a magnetic screen presence. It is also hard not to love things like the T-Rex rampage in San Francisco, or the raptor attack in the tall grass.

5. Invasion of the Body Snatchers

While an iconic acting presence in his own right, Jeff Goldblum is but one member of an ensemble cast full of recognizable faces in the 1978 remake of Invasion of the Body Snatchers, including Donald Sutherland, Leonard Nimoy, Brooke Adams, and more. Goldblum does not carry the show here as it was early in his career, but he does well, and the movie itself is overall terrific. Of the four movie versions of Body Snatchers, this 1978 take is arguably the most worthwhile.

Thor: Ragnarok is far from traditional sci-fi, but its intergalactic travel, alien planets, and advanced tech certainly qualifies it in the genre. Goldblum’s role as affably evil villain The Grandmaster in director Taika Waititi’s both thrilling and hilarious MCU film is not the biggest, but he makes the most of every second onscreen he is given.  Jeff Goldblum is but one of the many ingredients that make Thor: Ragnarok so much fun.

Related: Why Marvel Wasn’t Really Ready For Thor Until Ragnarok

While leads Sam Neill, Laura Dern, and Goldblum all shine in director Steven Spielberg’s epic blockbuster Jurassic Park, it is Goldblum’s Malcolm that truly became as iconic as any dinosaur in the movie. Malcolm is a charismatic and confident man, but also willing to put his own life on the line to save others. It is a testament to his popularity that author Michael Crichton retconned Malcolm’s book death later on.

To be sure, ranking director David Cronenberg’s excellent 1986 remake of The Fly ahead of Jurassic Park is likely to raise eyebrows. Still, there is no better showcase of Jeff Goldblum and his abilities in a sci-fi movie than his performance as doomed scientist Seth Brundle. Seth’s transformation into Brundle-Fly is truly heartbreaking, while the overall movie is bolstered by astounding practical effects work by Chris Walas.