Home Entertainment Every Elden Ring character with a Double Personality 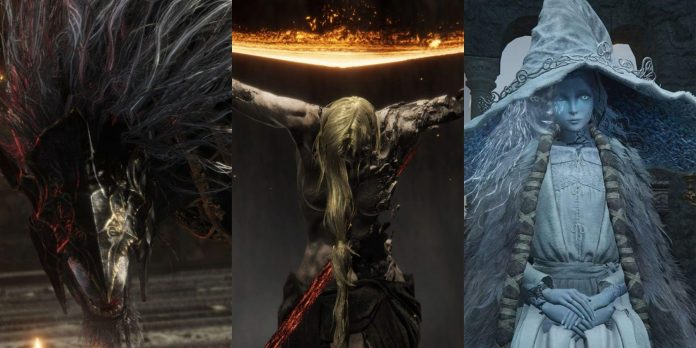 Elden Ring‘s open world is not only rich in its environment, but in its characters as well. The NPCs have unique designs, interesting motivations, and secrets. Elden Ring is full of secrets, and most of them involve the characters. In a game with a lot of betrayal and tragedy, a lot of characters have more than just one face. This can be literal and/or symbolic, as characters can physically change and/or have two different identities.

The identities get into Elden’s Ring’s larger theme of duality. There is duality in the story between the masculine and the feminine and gold and silver. In fact, many of the characters in Elden Ring come as twins or a pair from the D twins to Mohg, Morgott, Miquella, and Malenia. Items such as the Cursemark and Medallions come in two halves and a whole hand is split between the Two Fingers and Three Fingers.

Maliketh and Gurranq are one of the same, though that confused some fans since Gurranq still lives after Maliketh is defeated. This is because Maliketh is defeated in Farum Azula, a place that is outside of time. So Maliketh not only has this dual identity but exists in two places at once. As Maliketh, he is uncloaked, fights differently, and is the wolf-like being one can expect of Marika’s loyal shadow. As Gurranq, he is weaker and covers himself with a cloak to the point that he is barely recognizable.

What is most believed is that Maliketh’s face is the one that is known to Marika. It likely was not until Marika shattered the Elden Ring that Maliketh took on the identity of Gurranq. Due to being her shadow and loyal to the Two Fingers, he was ultimately betrayed, and his sanity shattered along with her actions (much like Blaidd with Ranni).

What is so mysterious about this dual identity is that there is no telling how it came to be. Radagon could have always been a part of Marika, or he could have come later. It is possible that he comes from within her, or that he was once an individual and circumstances forced them to be one person.

Hoarah Loux and Godfrey are the same people, same look, but different identities. The Hoarah Loux identity predates his Elden Lord title. Hoarah Loux was a warrior that was chosen to be the first Elden Lord and be with Marika. As Hoarah, he was bloodthirsty. As Elden Lord, he did not just get a new title and expectations but was forever changed as he got the Beast Regent Serosh. This beast attached itself to him as a way to tame his wild side.

With the beast, he is Godfrey, a man more collected and calm. He will use armor and weapons, as expected of an Elden Lord. Without Serosh, though, he became as he was before Marika, a brutal warrior who is not afraid to crush skulls with his bare hands.

RELATED: Why Elden Ring’s Erdtree is Essentially a Giant Parasite

St. Trina is a character only mentioned in item descriptions, while Miquella is one of the better-known demigods. Based on everything learned in the course of the game, much connects St. Trina and Miquella to the point that fans are certain they are the same person. The Torch of St. Trina describes the carving depicting Trina “unnervingly” in adult form, which connects to Miquella being trapped in eternal childhood. St. Trina’s items and descriptions also have a lot to do with sleep, which connects to Miquella’s current slumber.

The description for the Sword of St. Trina describes that Trina’s gender is often confused. This also fits with Miquella’s character design. It is known he is a boy, but the art of him shows a very feminine-looking figure with long blonde hair in braids. The items, St Trina’s Lilly and Miquella’s Lily, are also incredibly similar.

Margit and Morgott are the same person but have different names for different battles. When he is first met at Stormveil Castle, he is Margit. At the Leyndell Capital, his name changes to Morgott. The name Morgott is the name he was given at birth, as a son of Marika. However, due to being an Omen, he was never brought up like his demigod brothers and sisters and was instead cast aside. Morgott remained loyal despite this and looked after the Leyndell Capital after the Shattering while the rest of the demigods attacked each other.

The name Margit came about after the Shattering when Morgott decided to kill Tarnished that sought to become the new Elden Lord. He saw them as threats to all his family had accomplished. With a new name and disguise, he could attack Tarnished while they were still early in their journey through the Lands Between. The name change was to avoid attention from the demigods and the Tarnished that gathered at Roundtable Hold.

Ranni is a character with different layers of dual identity. When she is first met, the name she introduces herself as is Renna. The reason for this is still a little unknown, but fans have theories. It is known that Ranni looked up to her mentor, who was known as the Snow Witch. It is possible that Renna was the name of the witch, and Ranni sometimes uses that name with people she does not yet trust.

Having a double identity makes sense for Ranni, as she must protect herself from the Golden Order. She led the plot to kill Godwyn the Golden, sacrificed her Empyrean body, and seeks to possibly dethrone the Elden Beast for a new order. To use a different name makes sense, considering how much the Two Fingers may want her dead and gone.

Schumacher’s original idea of “Batman Forever” was much better

Where are the Silmarils in the Lord of the Rings