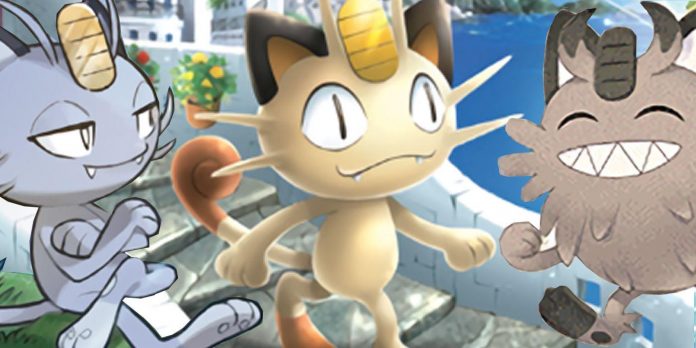 Most of the Pokémon series’ regional variants come from Gen 1 Pokémon. Out of the 54 regional variants that are currently known, 33 are from the original 151 designs. These forms re-explore the concepts of older Pokémon in an all-new context.

There are few “rules” applied to regional variant Pokémon forms. One of these is that if the Pokémon can evolve further, its evolution will also be a regional variant. Some Pokémon, such as Exeggutor and Marowak, have regional variants while their pre-evolutions, Exeggcute and Cubone, do not. But there is no instance of a non-fully evolved regional variant evolving back into a standard form.

Meowth Is The Only Pokémon To Have Multiple Regional Variants

Meowth is a standout Pokémon that has received two different regional variants thus far. Starting in Sun and Moon, Meowth and Persian received Alolan forms that change their Normal-typing into Dark. In Sword and Shield, in addition to introducing a Gigantamax form for the classic Kantonian Meowth, a Steel-type Galarian Meowth was added. This time, Persian was left behind as Galarian Meowth evolves into the all-new Pokémon Perrserker.

The pure Normal-type Rattata and Raticate received Alolan forms in Sun and Moon. These Dark- and Normal-type rodents served as opposites to Yungoos and Gumshoos, pure Normal-type Pokémon that evolve during the daytime starting at Level 20. The partially Dark Rattata line evolves instead at night starting at Level 20. These two evolutionary lines also serve as the first Totem Pokémon players face in Sun, Moon, Ultra Sun, and Ultra Moon, with Alolan Raticate being exclusive to Moon and Ultra Moon.

Alolan Vulpix is an Ice-type variation of the Fire-type Gen 1 Pokémon. After evolving into Alolan Ninetales through the use of an Ice Stone – which returns in Pokémon Legends: Arceus – it gains the Fairy-typing. Alolan Sandshrew is a dual-type Pokémon right away, being Ice- and Steel-type just like its Ice Stone evolution, Alolan Sandslash.

Alolan Diglett and Dugtrio add the Steel-typing to their Kantonian counterparts’ Ground-type. Their luscious locks of hair may be a reference to “Pele’s hair,” which is a kind of volcanic glass formation that has stretched out to look like strands of golden hair. This takes the tiny Pokémon Diglett’s whack-a-mole design and turns it into a miniature volcano.

The Rock/Ground evolutionary family of Geodude, Graveler, and Golem are given snazzy facial hair in Sun and Moon. The Alolan Geodude line replaces their Ground-typing with Electric, making it the only Pokémon with the Rock/Electric combination thus far. Unlike certain other regional variants in Pokémon, such as the Sandshrew line, which have a new evolutionary method with their new forms, evolving Alolan Geodude remains exactly the same as its Kantonian version: Geodude evolves at Level 25, and Graveler must be traded to evolve into Golem.

Like numerous other Alolan regional variants, Grimer and Muk gain the Dark-typing, making them Poison/Dark, a rare instance of a dual-type Pokémon with only one weakness. The Dark-type was added in Gen 2, and no Gen 1 Pokémon were given the type, unlike Steel, which was also added in Gen 2 but given to Magnemite and Magneton. Sun and Moon’s regional variants seem to have been a good opportunity to apply the Dark-type to numerous Gen 1 Pokémon.

Exeggutor, Raichu, & Marowak Have Regional Variants (But Their Pre-Evolutions Don’t)

The final few Alolan variants are of fully-evolved Pokémon whose pre-evolutions remain in their Kantonian form even in Alola. The comically tall Exeggutor exchanges its Psychic-typing for the Dragon-type and is well-loved by the people of the Alola region. Raichu gains the Psychic-type on top of its classic Electric-typing. This, and its ability to hover on its surfboard-like tail, gives Raichu a unique appeal over its pre-evolution Pikachu.

Marowak isn’t the only regional variant to completely change its type compared to its original form, but those that do, such as Vulpix and Sandshrew, do so from the start of their evolutionary line. Because Alolan Marowak evolves from a Kantonian Cubone, it changes completely from pure Ground-type into Fire/Ghost. Alolan Marowak takes the already tragic backstory of Cubone’s fallen mother and becomes a fire dancer who dances to mourn the dead.

Like the cute Vulpix before it, Ponyta and Rapidash receive adorable new Galarian forms in Sword and Shield. Ponyta starts off as a pure Psychic-type, while Rapidash gains the Fairy-typing, similar to how Alolan Ninetales added the Fairy-typing to its new Ice-type. But unlike Vulpix, whose regional variant evolves through a new method – Sun and Moon’s new Ice Stone – the Pokémon Shield exclusive Galarian Ponyta evolves into Galarian Rapidash at Level 40 just like its Kantonian counterpart.

Galarian Slowpoke, added in Sword and Shield’s 1.1.0 patch, keeps Kantonian Slowpoke’s Psychic-type but drops the Water-type entirely. Galarian Slowbro, which was added in the 1.2.0 patch, evolves from Galarian Slowpoke with the use of the new Galarica Cuff item, taking on the Poison/Psychic typing. Slowbro is the only Pokémon with both a regional variant and a Mega Evolution, although its Mega Evolution is inaccessible in Sword and Shield. Although not a Gen 1 Pokémon, Slowpoke’s alternate evolution, Slowking, also has a Poison/Psychic Galarian form.

Related: Pokémon: Why There Aren’t Any Mrs. Mimes

Galarian Mr. Mime, which replaces its Gen 6 Fairy-typing with the Ice-type, has a much simpler evolution method. At Level 42, it evolves into Mr. Rime. Mr. Mime’s Gen 4 baby pre-evolution, Mime Jr., does not have any sort of regional variant, although Galarian Mr. Mime can still hold an Odd Incense while in the Day Care to produce Mime Jr. eggs.

Galarian Weezing evolves from a regular Kantonian Koffing. Galarian Weezing cleverly takes the gaseous design elements of classic Weezing and turns them into faux facial hair, while it sports smoke stacks shaped like gentlemanly top hats. It adds the Fairy-typing to its Poison-type, and actually cleans the polluted air it consumes, releasing the air from its fake hats.

Kanto’s legendary birds, Articuno, Zapdos, and Moltres, received Galarian regional variants in the Crown Tundra DLC expansion of Sword and Shield. While they all maintain their secondary Flying-type, their primary types are changed completely. Articuno becomes Psychic-type, Zapdos becomes Fighting-type, and Moltres becomes Dark-type, forming a unique type triangle similar to that of the starter Pokémon, where each trio member has an advantage and disadvantage over another.

In Pokémon Legends: Arceus, two Gen 1 evolutionary families receive regional variants, and both are used as Noble Pokémon. Growlithe and Arcanine add the Rock-typing to their classic Fire-type, while Voltorb and Electrode add the Grass-type to their usual Electric-type. Only two sets of Gen 1 Pokémon received the regional variant treatment, giving the opportunity for Pokémon of other generations to take the spotlight. From here, it’s uncertain whether the next titles in the Pokémon series, Scarlet and Violet, will add new regional variants, and if they do, how many will be alloted to Gen 1 Pokémon.

Will Tom Cruise’s Iron Man ever appear in Doctor Strange 2?

The Legacy of Hogwarts Is Probably Better Without Romance Options