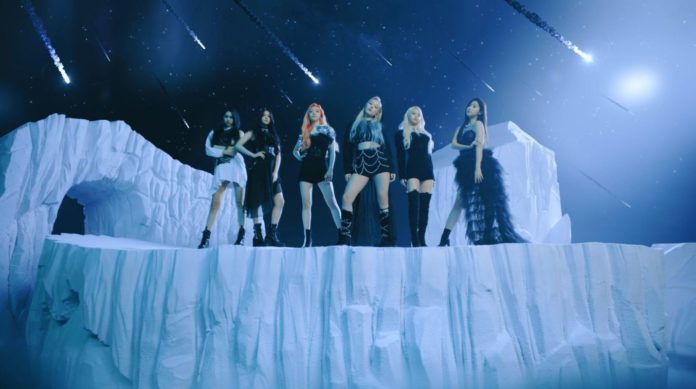 This is the promotional single from their first mini album, ‘Reminiscence’.

EVERGLOW made they comeback with the release of the song and the video of DUN DUN . The group surprised with a melody that engages with an energetic rhythm and the vocal abilities of the girls.

The video has scenarios mostly in cold and bright colors, where E: U, Si Hyeon, MIA, Onda, Aisha and Yi Ren dazzle with a unique energy . EVERGLOW again showed her girlpower concept with a charming but powerful choreography , as well as the charisma of the girls who look amazing with the different costumes.

The play of colorful lights in soft tones undoubtedly gives an extra touch to the music video, bringing a brightness to match the girls’ outfits. The girlgroup is accompanied by dancers who, using masks in the lower part of their faces, reinforce the presence of the girls of EVERGLOW , throughout the video a choreography full of power is shown that all dominate thanks to their abilities and their presence full of Strength and security

MIA stands out in the dance part , starring in one of the final parts during the musical solo. However, fans have been responsible for highlighting the way in which each of the girls contributed to the video showing their talent and visuality.

DUN DUN is part of the group’s first mini album, ‘Reminiscence ‘. This production contains 4 songs, including the promotional single.

Dakota Johnson and Chris Martin about to get married?

Kanye West is “committed” to Co-parenting with Kim Kardashian after Pete...