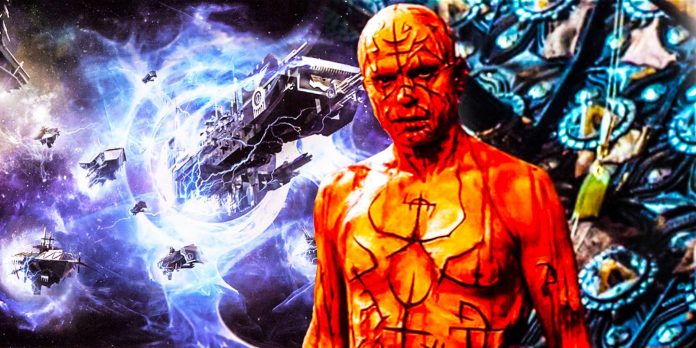 Some fans believe that the cult classic Event Horizon is a prequel to Warhammer 40k, but is there anything that confirms this? After the production of Mortal Kombat, director Paul W.S. Anderson abandoned other high-profile projects, such as Alien: Resurrection, to instead focus on the Event Horizon. This followed a rescue team that found an experimental spaceship that disappeared many years ago and discovered that it had literally been to hell and back again. The film was created in accordance with a tight production schedule and, after its release in 1997, suffered both a critical and commercial failure.

Related: Why Event Horizon is Undervalued (and Why It Blew up the Box Office)

The Event Horizon spacecraft itself is powered by a gravitational engine that can collapse space-time, allowing travel from one part of the universe to another. Unfortunately for the original team, they ended up in a hellish alternate dimension where they maim and kill each other. This dimension is never shown in “Event Horizon,” which also bears some resemblance to “Hellraiser,” but the description of this “chaos-filled” void has led to a convincing fan theory that the film is a secret prequel to Warhammer 40k.

The Event Horizon team may have visited the “Chaos” 40k dimension

Warhammer 40k is a board game in the genre of wargame, which takes place in the distant future, where humanity is constantly fighting with various alien and supernatural factions. Extensive knowledge of the universe makes it almost impossible to explain briefly, but with regard to the Event Horizon, it looks like the ship’s crew could have entered the “Warp”, also known as the “Immaterium”. It is an alternate dimension consisting of psychic energy, as well as a home for the so-called Chaos gods and other demonic beings. Ships can travel through the warp, but in order to protect themselves from the dark forces that are there, they need to use the Gellar Field to protect the crews from the madness outside.

The Event Horizon/Warhammer 40k prequel theory claims that the Event Horizon team, which features Sam Neal’s cool Easter egg, marked humanity’s first journey through the Immaterium, and its gravity engine later led to the creation of Warp-Drive 40k. The team was exposed to the chaotic energy of this dimension, which pushed them to acts of violence and murder, and when the Event Horizon returned, it brought with it an entity— possibly a Chaos Demon—that attacked the rescue team, causing hallucinations. who profit from their fears.

Dr. Weir Nila later becomes obsessed with the presence of evil on the ship, rips out his eyes and describes the alternate dimension as “pure chaos”. From the Gothic design of the film to the many similarities between the two objects, the theory linking the “Event Horizon” — on which the series will be filmed — and Warhammer 40k is compelling. The pieces line up well, and at least it’s a fun theory to explore. Event Horizon screenwriter Philip Eisner also answered a fan question about Warhammer 40k on Twitter in 2017 and stated: “I was playing 40K shit, so it definitely had an impact, conscious or not.”