Home Celebrity In an event, Demi Lovato tells how the new songs are going... 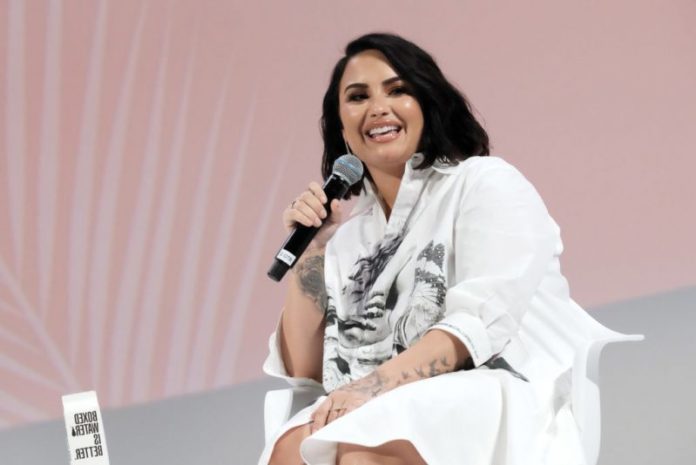 Last November 2 Demi Lovato attended one of the first events after a long break to take care of her health. She gave an interview at a Teen Vogue conference in Hollywood. The goal was to talk about topics relevant to the young audience, being the singer one of the best for that.

One of the main subjects was self-esteem and positivity with one’s own image. “I think it was a very introspective year for me. I learned a lot, I went through a lot, ”said Demi. “We hear this body positivity term all the time. To be honest, I don’t always feel positive about my body. Sometimes I don’t like what I see. I don’t sit and keep thinking about him. I can’t lie, ”he reflected. “I used to look in the mirror if I was having a bad day of body image and say ‘I love my body, you’re beautiful and wonderfully perfect’. But I didn’t believe it. I don’t need to lie to myself and tell myself that I have an amazing body. All I have to say is ‘I’m healthy’. In this statement, I express gratitude. I am grateful for my strength and the things I can do with my body. I’m saying I’m healthy and I accept the way my body is today without changing anything, ”he continues.

Still in the interview, she says that she learned to respect her body when it comes to physical exercises, without exceeding the limits. “For many years, I dealt with an eating disorder. What I don’t usually accept is that whenever I was at the gym, I did that in an extremely sick way, ”said Demi. “I think that’s what led me on a darker path – I was still involved in these behaviors. Embracing my body as it naturally is is why I took time off from the gym in October, ”he confessed.

Now Demi wants to show her as real side as possible. “What people don’t realize is that I’m an extremely sensitive person. When someone says something bad about me or makes fun of me, I have a good sense of humor. But when it’s a very serious matter, even if it’s a fan talking and leaves a comment that says, ‘You look like Lord Farquaad with that hair,’ then I think, ‘damn, that’s a bum,’ he says. “I’m so tired of pretending I’m not human. When you say something, it affects me. I try not to look, but I see, ”he says.

Still on music, she was asked how the progress is and will be released soon. Check out the answer: “I have new music coming up. I didn’t say when – now I’m just kidding you. It’s important to remember that this time I’m so cautious about doing things again. I really decided to focus on that, ”said Demi. “When the time is right, I’ll make it public. I’m dying to release new songs… but all in due time. ”

She will only release when she realizes she really has an amazing album. “I have a lot of confidence now because I said the things I believe. I know I can stay on a first date with someone, in a conversation with someone. That’s what I see when I look in the mirror – a strong woman, ”he adds.