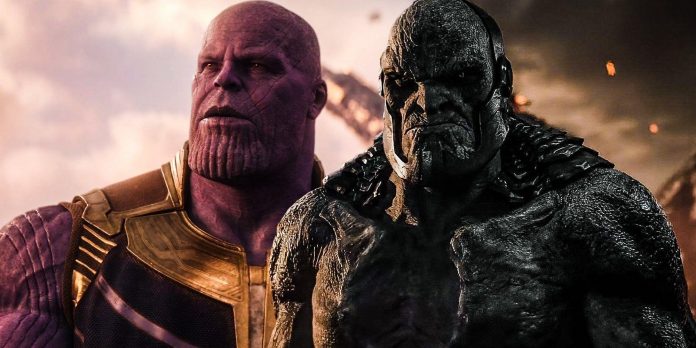 The main villains of the DC Comics universe and Marvel Comics are closely related, since the image of Thanos was partially inspired by Darkseid. Although the two big bad guys from their universes will always be connected to each other for several reasons, when the Avengers faced the ruler of Apokolips in the crossover of JLA and the Avengers, they noted that he “looks worse than Thanos”. This moment showed that the “Most powerful Heroes of Earth” considered Darkseid to be even a better (and worse) villain than the Mad Titan.

The stronger villain between Thanos and Darkseid has long been a talking point among comic book fans. Their similarity and attempts to control their universes with the help of incredible reality-shaping weapons (the Infinity Gauntlet against the Anti-Life Equation) made them quite comparable. However, Thanos, contrary to popular belief, was based not only on Darkseid, but also on the all-seeing Metron of the New Gods. But Thanos got a bulkier look that inspired Darkseid after editor Roy Thomas told villain creator Jim Starlin, “If you’re going to steal one of the New Gods, at least rip off Darkseid, a really good one!” As a result, the Mad Titan gained considerable mass after his first appearance in Iron Man # 55″, where the villain looked much thinner than readers know him today.

In the epic JLA/Avengers crossover created by Kurt Busik and George Perez from Marvel Comics and DC Comics, heroes from both universes find themselves on Apokolips before Darkseid, who acquired Thanos’ Infinity Gauntlet. Hawkeye can’t believe what he sees when the New God wields the Infinity Stones, as he admits that Darkseid is “worse than Thanos, if that’s even possible.” The comment is a funny way Marvel, with the Infinity Gauntlet, admits that Darkseid is even a better villain than Thanos.

Seeing Darkseid holding the Infinity Gauntlet is one of the most terrifying sights of the comic crossover, but it’s funny that he couldn’t use Thanos’ greatest reality—altering power. Even though the Infinity Gauntlet was the same weapon filled with Infinity Stones that the Mad Titan used to rewrite reality, it could not function in the DC universe as the gems were only meant to work in the Marvel Universe. As a result, this causes Darkseid to throw away the glove without much care, as he throws it aside as if it means nothing.

It’s wild that Marvel Comics allowed the Avengers to call Darkseid a better (or at least a worse and more menacing) villain than Thanos. But this is more evidence that Darkseid is the supreme god of evil and more impressive than his counterpart from another universe. In the end, Marvel admitted that Darkseid is worse than Thanos, even if the villain he helped inspire is also a powerful engine in his respective reality.