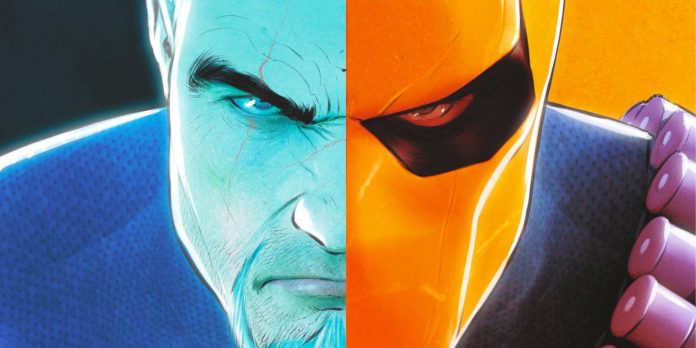 Warning! Spoilers Ahead for Deathstroke Inc. #11

In the latest issue of Deathstroke Inc. DC Comics, Slade Wilson finally reveals why his costume is orange. As one of the deadliest mercenaries in the DC universe, it has never made much sense why a killer like Deathstroke wears such a bright color, given the nature of his work, which is often of a clandestine nature. However, the new Slade Year One arch shows that orange has never been a deliberate fashion choice.

While Deathstroke Inc. talked about the rise of Slade Wilson to power as the king of supervillains, this arc now continues in the current DC crossover Dark Crisis on Infinite Earths, where Deathstroke took advantage of the death of the Justice League. Now Deathstroke Inc. looks back as Slade gets his own first-year storyline, a classic DC foundation that explores some characters’ early days in more depth. As can be seen from the first issue, Slade volunteered to undergo government experiments to improve his physical abilities and give him a healing acceleration factor.

Now Deathstroke Inc. #11 by Ed Brisson and Dexter Soy continues the arc of the first year, when Slade embarks on his first mission after a government experiment that turned him into a super soldier. Hired to kill the scientist in charge of a dark project that hid the deaths of 47 other soldiers who did not survive in the process, Detstroke and his friend/mentor Bill Wintergreen visit a liaison who provides them with an experimental combat suit that also hides Slade’s identity. However, his status as a rare prototype explains the bright orange coloration, which would seem to contradict Slade’s work as a killer.

Given that the coloring has hardly changed throughout Deathstroke’s career at DC Comics, it seems that the orange color eventually grew on Slade Wilson (Wintergreen definitely liked it). Its value as a bulletproof and self-healing material probably also made it difficult to discard it. Similarly, it’s not hard to imagine that Slade probably likes the bold message of confidence that the orange suit inherently conveys to its enemies.

While it was never planned for Slade’s costume to be orange, there’s no denying that it has become incredibly iconic during his deadly tenure in the DC universe. It’s certainly a bold testament to his skills and abilities as a mercenary after wearing it for 42 years as a DC Comics villain. Deathstroke Inc. #11 is already on sale.

Prime Day 2021: Gamer Products We Want To See On Sale