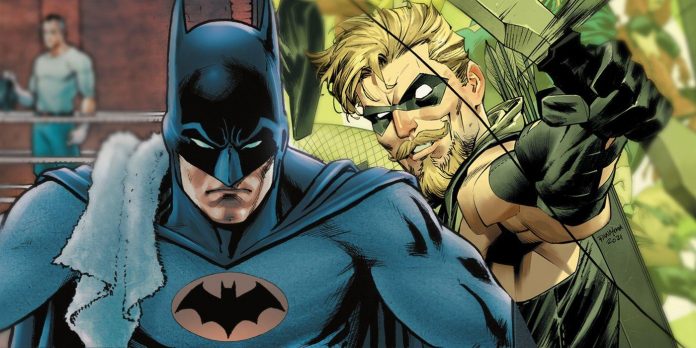 The usually stoic Batman has the words to tell Green Arrow the story of “borrowing” his ideas. A moment of reminiscing about Oliver Queen’s old arrow-style gear made Batman reveal his thoughts about how unimaginative Green Arrow really is.

When Batman appeared on the scene as a comic book hero, he did not just amaze readers with his exciting tricks and sharp detective abilities. More than anything, people liked to see the impressive devices that the Dark Knight used against numerous enemies. With toys like the Batmobile, who wouldn’t enjoy Batman’s inventions? But Batman’s biggest fake, Green Arrow, has received a lot of criticism for having modeled its fight against crime after the Dark Knight—and for good reason. Because, interestingly, names like “Arrow Cave” don’t look like they came from the most original place.

Link: Robin admits that Green Arrow is basically Batman, but even worse

At least that’s what Batman thinks, and he was ready to tell Green Arrow about it. In “Green Arrow #5” by Kevin Smith and Phil Hester, Batman examines Oliver Queen after the former returned from the dead, having no idea what was going on. Accepting that it is actually a Green Arrow, Batman tells the hero about things, including the fall of the Green Lantern as an evil Parallax. The shock of missing years overwhelms Green Arrow, but he convinces Batman to help him in an attempt to figure out how Oliver came back from the dead. The two head to Star City, the Queen’s hometown, on Batman’s Batwing plane. Green Arrow is impressed by the car and says it is vastly superior to his own Arrow plane. They have a little discussion about the lackluster names of Oliver’s cars, prompting Batman to ask if Green Arrow ever had an original thought.

Considering that most of Green Arrow’s gizmos followed the same naming conventions as Batman’s best gadgets and weapons, Bruce is right. Of course, the premiere of both characters took place during the Golden Age of Comics, when subtlety was not a strong side of writing. What’s interesting about Batman’s criticism is not so much that he’s angry that Green Arrow modeled himself after Bruce, but how little imagination Oliver put into his own efforts.

Green Arrow and Batman are far from the only heroes operating at street level in the DC universe. There are dozens of heroes working with Bruce in Gotham alone, many of whom were trained directly by him. But unlike Green Arrow, heroes like Nightwing and Red Hood have made their personality independent. There’s no Nightmobile or Hoodcave here, so Green Arrow should definitely feel a little embarrassed by the lack of originality. And, of course, an argument can be made that Batman is not entirely original with his ideas, since he simply puts the word “Bat” before the names of his weapons. But Batman has made a name for himself thanks to his unique crime fighting, so it’s no surprise that he’s a little annoyed by the imitation of Green Arrow.

Qui-Gon’s Return Explains Why Force Ghosts are So Rare in Star...