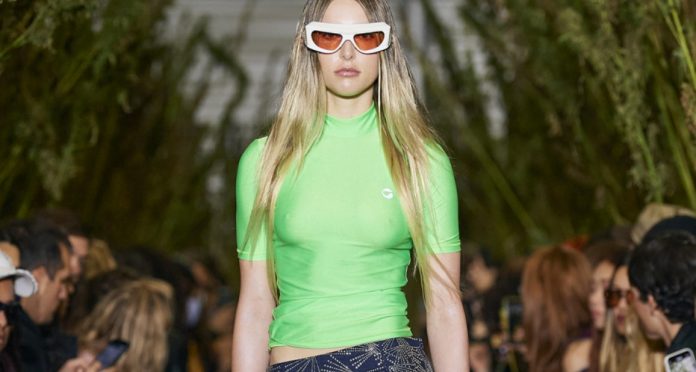 The debut of Eve Jobs, daughter of the founder of Apple on the catwalks of the fashion week. At the age of 23, he walked the catwalk for the first time at the Coperni show.

As every year, also in this Spring Summer 2022 edition, the international fashion weeks, in addition to presenting new collections, have brought new faces of models to the catwalks to be made known and launched in the sector. Among these, during the Paris fashion week, it was impossible not to notice Eve Jobs, daughter of the famous Apple co-founder.

The twenty-three-year-old appeared among the thirty models who walked during the Coperni show who, on a sunny and mild Parisian morning, presented her collection on a sandy catwalk, surrounded by a huge field of hemp plants. With a neon green top and an embroidered mini skirt, Eve Jobs made her debut sporting a worn look inspired by high tech, the main theme of Coperni’s Spring Summer 2022 collection.

As one of the two designers, Sébastien Meyer explains, the event of the Parisian ready-to-wear brand was defined by an imaginary where the female figure is thought of as the “techno chic woman who goes to the beach. She loves fashion. She is a surfer. She’s a mermaid who wears cropped jackets, psychedelic tights, and athletic lace, crochet or paisley bras. The face of the beautiful Apple heiress was decorated in a retro-futurist style with white shades and maxi glasses with geometric lines and orange lenses.

The model, born in 1998, who made her debut on the catwalks during Paris Fashion Week, was already linked to the fashion world, in fact, she was the testimonial of the beauty brand Glossier in 2020.

In the self-made photographed campaign she has a wet look and wears eye-patches against dark circles, while she is immersed in the bathtub and sips some rosé wine. Between her passion for horseback riding and her scholastic commitment at Stanford University, the young Jobs seems to be very interested and present in the fashion industry. For the 23-year-old, who has nonchalantly walked near the well-established Gigi Hadid, Mica Argañaraz, and Adut Akech, this promises to be just the beginning.