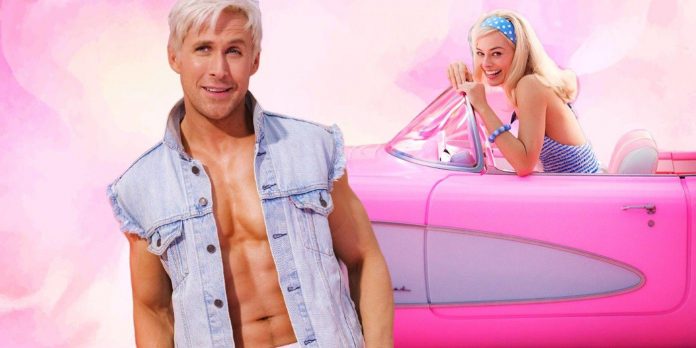 Eva Mendes tells Ryan Gosling about an unusual prop for his upcoming movie “Barbie”. Based on the classic Mattel toy series of the same name, the Barbie movie was created in collaboration with the Oscar-nominated director of “Lady Bird” and “Little Women” Greta Gerwig. Margot Robbie will play the titular blonde, and Ryan Gosling will play her male colleague Ken. However, as in the case of the toy line, there will be several versions of the main characters: Issa Ray will play an alternative Barbie, and Sima Liu will play another version of Ken.

Recent photos from the shoot and promotional images clearly showed live versions of Barbie and Ken, as well as a possible villain played by SNL alumnus Will Ferrell. One such promotional image of Gosling caused a stir among fans on social networks. The photo in question showed the actor dressed as Ken, with bleached gray hair, wearing a sleeveless denim jacket on his bare torso and with a ribbon of Calvin Klein-style underwear peeking out from under the waist of his trousers.

During a recent discussion on The Talk, Mendes, Gosling’s longtime partner, talked about her strange request for props from the Barbie set. The actor admitted that Gosling’s viral image as Ken made her feel like a teenage girl again, which prompted her to ask Gosling for his underwear from the movie. Read below what Mendes said.

“Well, first of all, I saw the photo, and the 14-year-old in me thought, “Ahhh.” It’s a funny photo and he’s trying to be funny, so it worked on all levels. When I saw him, when he sent it to me from work, I thought, “Can I please have this underwear? Please, I never ask for everything,'”

Mendes’ humorous request for a costume illustrates the strong bond she has with Gosling. Her giddy response to the promotional photo, an image that made her swoon like a teenager because of the Tiger Beat heartthrob, only shows the meaningful bond she still maintains with her partner of over 10 years. The passionate reaction to Ken Gosling’s costume is also a testament to the attention to detail on the part of the Barbie costume designer, who styled the costume for the popular underwear ads and models of the 1990s.

Actors keep props from their films — a common practice in Hollywood. Sam Neal admitted to keeping his comfortable shoes from Jurassic Park, Diego Luna took home some imperial credits from his upcoming Andorean TV series, and Christian Bale recently revealed that he also kept the sword of the Butcher God Gorr from Thor: Love and Thunder. like several Batman costume hoods in Christopher Nolan’s Dark Knight movie trilogy. Mendes’ strange request for Gosling’s costume underwear from Barbie is both a funny and cute expression of love for her partner.