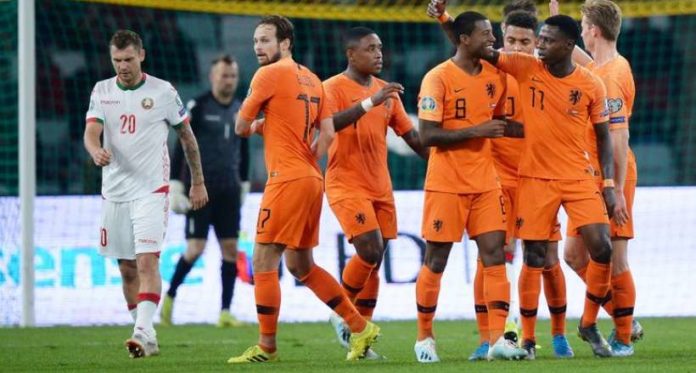 The Euro 2020 qualifiers were continuing in the early evening. The Netherlands had a tough match in Belarus, where they narrowly won (2-1). Russia qualified for the competition by easily dominating Cyprus (5-0) while Scotland made the show against San Marino (6-0).

Three days after crucifying Northern Ireland at the end of the match (3-1), the Netherlands could take off in Group C of the Euro 2020 qualifiers. For that, it was necessary to win in Belarus. . The Oranjes quickly took responsibility by monopolizing the ball. For 20 minutes, Ronald Koeman’s players took care to build. Launched on the right, Joël Veltman found Donny van de Beek whose lobed attempt passed over the cages of Aleksandr Hutor (20th). Belarus responded in the wake. Following a corner, Denis Laptev was found in the box and he was trying his luck. His strike was countered by Matthijs de Ligt and his second chance was totally lost (26th). Surprised, the Dutch accelerated. After a strike by Quincy Promes (31st), the Oranjes found the flaw. Right side, Quincy Promes wrapped a center to the far post. From the head, Georginio Wijnaldum opened the scoring (1-0, 32nd)

The Dutch even took cover without forcing. Left side, Steven Bergwijn served Georginio Wijnaldum at the entrance of the opposing surface. With a curling shot, the Liverpool midfielder cheated the goalkeeper and offered himself a double (2-0, 41st). From a shot from afar, Evgeni Yablonski came close to finding the right corner of the Dutch … Without success (45th). It was all for this first period. Belarus did not give up and a sublime center left side, Denis Poliakov found the head of Stanislav Dragun who reduced the score (2-1, 53). Motivated, the locals put pressure on the Oranjes. Launched on the right, Igor Stasevich appeared at the entrance to the surface and narrowly missed the right skylight (57th). Belarus insisted and Stanislav Dragun tried his luck after a corner. Alone on the right of the surface, he saw his recovery to the right of the Dutch goals (65th). Ronald Koeman’s players reacted painfully with a header from Luuk de Jong who passed over the Belarusian goals (75th). Shifted to the right of the surface by Georginio Wijnaldum, Donyell Malen struck at close range. The goalkeeper countered in a corner (79 ‘). The Netherlands dominated the end of the match and fared well with a 2-1 success that kept the first place.

While Belgium has already gotten tickets for Euro 2020, Russia could emulate it in Group I if they win against Cyprus. And everything started well for Stanislav Cherchesov’s players. Defender Georgiy Dzhikiya quickly found the crossbar (2nd) before Aleksei Ionov forced Kostas Panayi to intervene (8th). Finally, the solution came against it. Launched on the left side, Denis Cheryshev entered the Cypriot surface and sent a heavy shot into the left corner (1-0, 9th). Russia quickly took cover on a collective movement Aleksey Ionov crossed to the right of the box and the ball was not cleared by the defense. Denis Cheryshev then served Magomed Ozdoev who doubled the bet (22nd). The nightmare was confirmed for Cyprus after a red card defender Kostas Laifis following a sole on Sergey Petrov (29th). In numerical superiority, the Sbornaya affirmed its domination. Assisted by Artem Dzyuba, Aleksandr Golovin found the crossbar following a heavy shot from the entrance to the surface (52nd). Russian players continued to gain many opportunities without success. Finally, the home scorer Artem Dzyuba scored his ninth goal since the start of the playoffs after a good center Denis Cheryshev (79). The Zenit striker then allowed Aleksandr Golovin to participate in the show (89th) and Denis Cheryshev even scored a second goal (90th +2). With this 5-0 win, Russia is the third country qualified for Euro 2020 after Belgium and Italy.

Although eliminated, Scotland has done the job against San Marino. Aston Villa midfielder John McGinn has distinguished himself. Fast scorer on a good job Ryan Christie (12th), he then offered a double (28th). Before half-time, he then ideally found Stuart Findlay who was responsible for adding a little more mark (45th +1). In the second half, Lawrence Shankland (65th) scored while Stuart Findlay also achieved a double (67th). Stuart Armstrong split himself with a late goal (87th). With this heavy 6-0 win, Scotland lifts their heads three days after a heavy defeat against Russia (4-0). Eliminated, the Tartan Army will nevertheless participate in the dams of March thanks to his good career in the League of Nations. Finally, Hungary did the work against Azerbaijan. Willi Orban’s teammates quickly opened the scoring with Mihaly Korhut (10th). Widely dominating, however, the Magyars missed.

The results of the matches of 18h:

– Belarus 1-2 The Netherlands: Stanislav Dragun (53) for Belarus; Georginio Wijnaldum (32nd and 41st) for the Netherlands

WNBA Star: “No one wanted to play” after Britney Griner Verdict