DappRadar has shown that decentralized and Ethereum-powered applications (Dapps) have over 1 million active users in the last 30 days. It was stated that 6 dApps included in the ranking were in the DeFi and stock market categories, while the other four were in categories such as market place and games.

In the news of Cointelegraph, it was shared that the number of DeFi users increased by 11% in the first 11 days of November. Referring to the report of DappRadar, it was emphasized that decentralized applications had a transaction volume of over 21 billion dollars in the last 30 days.

In the report, it was stated that users on Crypto.com, Uniswap and Compound make up 90% of daily active wallets. Crypto.com seems to have stood out with nearly half a million daily active wallets in the last 30 days. Uniswap’s number of users decreased by 6% to 276 thousand. Compound’s number of users has exceeded 141 thousand with an increase of 448%. 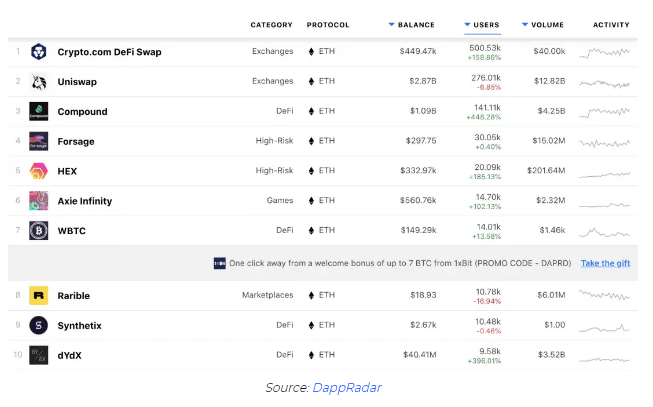 The eighth place Rarible is the marketplace application. The application, which has a 16% decrease in the number of users, has more than 10 thousand users. Finally, Synthetix and dYdX DeFi applications are among the ones that managed to find their place in the list. Synthetix had 10,480 users, down 0.46%, and dYdX had 9,580 users, up 395%.

Change in the number of users of the top 10 applications

DappRadar showed in the graph below that users are heavily oriented towards DeFi and stock market applications. The report noted that the number of active users of 1 million, said to be relatively small, could be significant for the Ethereum network.

Nobel Laureate Roubini Explains Why Bitcoin Is Down

Bloodborne can receive remaster on PS5 and PC

Fired minister who refused to use soldier against protests

Former French first lady apologized for video in which she mocked...