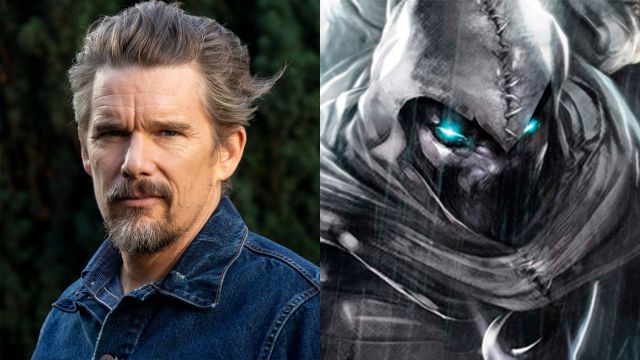 The famous Hollywood actor joins the cast as a villain in one of the upcoming UCM series for Disney + alongside his protagonist Oscar Isaac.

The Marvel Studios series for Disney + continue to complete their castings, especially those scheduled for 2022 onwards, since those that are released this year are either already complete (such as Scarlet Witch and Vision) or their respective productions are already ending, such as Falcon and the Winter Soldier or Hawkeye, the latter in full swing with a possible premiere at the end of the year. So much so, that one of the series scheduled for next year, Moon Knight, adds a new renowned actor to its production; and the chosen one is none other than Ethan Hawke, who will play the villain of the series.

Thus, and as reported by The Hollywood Reporter, the famous actor from films such as Training Day, Regression or Asalta al Distrito 13, among many others, will play the antagonist of Caballero Luna, a character for which actor Oscar has already been confirmed. Isaac via the series’ cinematographer. Of course, at the moment it is unknown which character Ethan Hawke will play, although there is already speculation with Bushman, Marc Spector / Moon Knight’s main enemy.

Recently, the incorporation of actress May Calamawy in an important role in the series was also announced, thus becoming the more than likely love interest of Moon Knight with Marlene Alraune. In addition, directors Mohamed Diab, Justin Benson and Aaron Moorhead have also been confirmed, who will direct Oscar Isaac through the different identities of Spector, with the aim that later, Moon Knight, join the rest of the MCU superheroes. on the big screen.

A few weeks ago the synopsis of an “action and adventure series that shows a complex vigilante who suffers from a dissociative identity disorder was also revealed. The multiple identities that live inside are different characters that appear framed in an environment with Egyptian iconography ”.

It will feature Fortnite, Pele and many soccer content