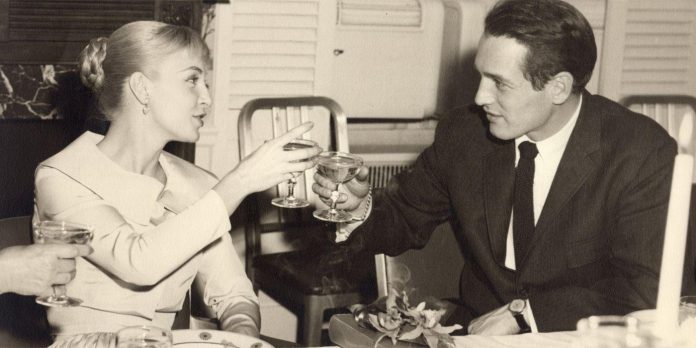 Ethan Hawke has had a long and storied career in Hollywood, and has been respected for his work in every genre from romance dramas such as Before Sunrise to military films like Training Day and even his recent villainous turn in thriller The Black Phone. But his work as a director is also gaining acclaim in recent years. His upcoming docuseries The Last Movie Stars, which will premiere July 21 on HBO Max, sees him reflecting on the industry itself through the lives of Paul Newman and Joanne Woodward.

During the pandemic, Hawke was tasked by the Newman family to bring the story of Paul and Joanne to light. In order to do so, he gathered recordings from an unfinished memoir Newman began with his friend Stewart Stern (who wrote Rebel Without a Cause). As he know it was not a mission he could accomplish alone, Hawke also gathered friends and colleagues from the industry to read the transcript out loud and give voice to the glowing stars of the past. George Clooney voices Paul Newman and Laura Linney voices Joanne Woodward, but they are joined by a large and eclectic ensemble who were all touched by The Last Movie Stars in some meaningful way.

Screen Rant spoke to Hawke about the difficult process of crafting a narrative out of the lives of two people whose stars burned brighter than anyone could imagine, and what lessons he hopes to pass down to the next generation of actors after making The Last Movie Stars.

Screen Rant: I was so fascinated by this docuseries, because there’s always a dialogue between being immersed in a story and then wanting to know the story behind that story. As you were combing through what I assume was hours of footage of Joanne and Paul, what is it like to witness both those stories play out at once?

Ethan Hawke: Well, it practically broke my brain. Their story is so epic; it’s just an epic love story.

When you think about these two people meeting as understudies backstage at a Pulitzer prize-winning play, both making their Broadway debut in the 50s and going to acting classes with Marlon Brando and Marilyn Monroe and James Dean… You’re like, “Wait, this is your origin story?” And then you’re seeing them in Mr. and Mrs. Bridge in their 70s. They’re making meaningful, substantive art for the 50 years in between and starting the first completely philanthropic merchandise [business]. It’s just a huge story.

Figuring out how to tell it and create a narrative out of it [was hard]. Life doesn’t really have a beginning, middle and end; life just happens to us, and we’re all trying to shape it into a story. If they would have let me quit, I would have 15 times. I just was like, “How am I going to do this? What am I doing? How did I get myself into this?” It was a little bit like jumping off a high dive and hoping you don’t belly flop. I was just figuring it out as I go.

I was reading some of your reasons why George Clooney makes perfect sense as Paul Newman, which he absolutely does. But were there any other discussions about who should read who? How did everyone’s roles fall into place?

Ethan Hawke: It happens really organically. George was the first person I thought of who might really have insight into the things Paul’s talking, about what it’s like to sustain excellence at the absolute top. There’s a handful: Clooney, Denzel [Washington], Tom Cruise. There’s a handful of people that have got there and stayed there.

And George seems like-minded. He’s a political person; he’s a civic person. He likes to direct. He’s had a long, unbelievable career, and so I thought that he might relate to it. And, of course, he loved Paul Newman. He knew him, and they also share the ability to make it look easy. They make it look fun, and I appreciate that.

Laura Linney was a different idea. I knew Laura, and I knew that Laura’s great mentor was Joanne Woodward. I was like, “That’s perfect.” Laura is an actor’s actor. She’s a master at what she does, and she reminds me of Joanne in the best way. Those were kind of obvious.

There are other things. I asked Zoe Kazan because I knew her grandfather was Paul’s great mentor, so that felt like a conversation that was meant to be. LaTanya Richardson has been married to Sam Jackson for 50 years, and she was directed by Joanne. I was just trying to seek friends of mine out who might have something authentic to offer.

I remember geeking out when we were in our 20s and getting drunk with Sam Rockwell, talking about Cool Hand Luke for three hours once. So I thought, “I want to talk to Sammy about this.” I just kind of followed my nose about what might provoke interesting dialogue.

I loved the conversation you had with Sam Rockwell about meeting Paul and Joanne in real life. How does it feel to be in conversation, reflecting back on their legacy?

Ethan Hawke: In general, I always feel like the more you’re doing things you love, good things seem to happen. I love Sam Rockwell, I love Paul Newman, and I love actors. I’m such a natural-born romantic, which I’ve been since a young person. You’d hear about Paul and Joanna, and it they just seems like, “They did it. They really did it.” I wanted to look deep into that. How do you do it? What does it even mean to do it?

If you’re going to direct something, you have to have a genuine interest or you lose steam. I just felt a great responsibility to try to do it right, because I knew that we wouldn’t be able to return to this moment. This was their shot at somebody doing a good documentary, and it fell to me. I just invited people to help me. “Help me! Maya, help me! Somebody help me.”

How is this project expanded your view of directing, and where is it taking you next?

Ethan Hawke: For me – the student me – it was the editing process. I’ve directed things before, but the editing process was just as far as ours. I learned a lot, like how to tell a story with a juxtaposition of images, word, sound and music. It’s extremely difficult. We made a lot of mistakes to make, and we went down a lot of false paths.

I can make a three-hour documentary about him racing cars, because it’s so much fun. I could talk about Butch Cassidy and Sundance Kid for hours. But my wife doesn’t want to talk about either one of those, things, right? I had to figure out, “How can I make this interesting to other people?”

There’s so much advice that we can glean from Paul and Joanne’s lives, not only as actors, but as people. As someone who’s shepherding another generation of actors, including Maya, what are some of the most important lessons you’ve gleaned from them?

The Last Movie Stars is a six-part documentary from CNN Films and HBO Max that chronicles Paul Newman and Joanne Woodward’s iconic careers and decades-long partnership. Director Ethan Hawke brings life and color to this definitive history of their dedication to their art, philanthropy, and each other. Academy Award-winning director, writer, and producer Martin Scorsese serves as executive producer.

Dead by Daylight Anticipates Murders In Gore Key In The Trailer...

Rick and Morty: Season 5 Gets a New Action-Packed Trailer; Look!