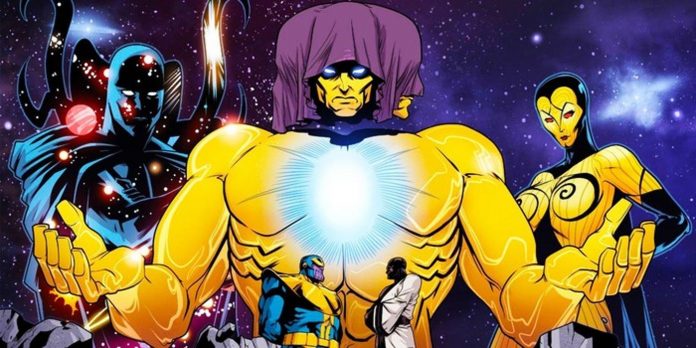 Thor: Love and Thunder marks the first official appearance of the cosmic entity known as Eternity in the Marvel Cinematic Universe. Fans of Marvel Comics will recognize that Eternity’s arrival portends the coming of many cosmic entities from the deep lore of the Marvel Universe.

In Marvel lore, cosmic entities predate the existence of all life in the universe. They are supernatural beings of incredible power who were involved in the creation of the Infinity Stones. While Marvel lore contains hundreds of cosmic entities, sometimes called abstract entities, there are a handful of particularly important cosmic characters in the fellowship.

Eternity is one of the most important abstract entities in the history of the Marvel Universe. The being first appeared in Strange Tales #138 in 1965 and is considered to be the living personification of time, and therefore the most powerful entity within its hierarchy with the sole exception of the Living Tribunal itself.

Eternity is one of the few primordial beings of its kind to show up in the MCU, with his involvement proving to be one of the biggest surprises in Thor: Love and Thunder. This being and his kin prove to be so important to the structure of the universe that their destruction resulted in the Secret Wars that nearly destroyed Earth-616 in its entirety.

Infinity is considered to be the “sister” of Eternity who first appeared in Ultimates 2 #100 in 2017. Formerly a singular being with Eternity, Infinity split from her brother at the birth of the Seventh Cosmos, with the two entities pairing together to make up the very flow of this new universe.

Infinity is an important character in recent cosmic occurrences throughout the Marvel Universe, acting as a major player in the Eternity War, in which she defended her brother’s position as “everything that is” against the designs of the First Firmament, the living embodiment of the first rendition of the universe to ever exist.

Lady Death is a vital character in the makeup of the cosmic universe in Marvel Comics. In stark contradiction to the purposes of Eternity and Infinity, this cosmic entity embodies death itself and the decay of all living things, including the universe itself. She made her first appearance in the early 1940s in Marvel Mystery Comics #21.

Lady Death has a major role in the famous Infinity Gauntlet storyline upon which Avengers: Infinity War is loosely based. After becoming enamored with Death, the Mad Titan Thanos attempts to allure her with a grand display of destruction but is never able to win her affection. It is later revealed that Lady Death had eyes only for Deadpool, a man who continually seemed to avoid her embrace.

First appearing in Captain Marvel (Volume 5) #2 in 2002, Entropy is the son of Eternity himself. Entropy has come to represent the “Big Freeze,” a cosmic phenomenon that scientists believe will cause the ultimate end of the universe in which its innate entropy levels expand beyond the capability of supporting any life.

Entropy is a relatively new character in the Marvel pantheon of primordial beings but has proven to be an important one in his relatively short amount of time, as it is eventually revealed that he is the precursor to Eternity, with each new rendition of the universe producing an Entropy that will inevitably transform into Eternity himself.

Oblivion is a cosmic entity first appearing in Iceman #1 in 1984. He is a being that supposedly existed before the creation of the Multiverse itself, placing him in stark opposition to the very existence of life. Oblivion is also considered to be a relative of another abstract being, the cosmic entity known as Lady Death.

At times, Oblivion creates an avatar of chaos, the best known of which is the Chaos King, who eventually became the Japanese deity known as Amatsu-Mikaboshi. Oblivion is shown at various times to be pleased by destruction and cherishes the destruction of each universe within the Multiverse.

Master Order and Lord Chaos are brothers, two sides of the same coin in the Marvel cosmic universe. Both characters made their debut in 1977 during the events of Marvel Two-in-One Annual #2. As their names imply, Order and Chaos were in stark opposition with one another throughout the eons, creating another entity, known as the In-Betweener, to act as an intercessor between them.

The Marvel Universe, constantly rebooting and reinventing itself, eventually combined these two entities into a new being known as Logos, who betrayed the other beings in its pantheon during the attack of the First Firmament. In present-day comics, Order and Chaos have been returned to their separate bodies, but sit in judgment of the Living Tribunal.

Mistress Love and Sire Hate are two cosmic entities that are almost always present during meetings of the great abstract beings. The former first appeared in Defenders #107, in which she was presented as the living embodiment of love, while her counterpart first appeared during Galactus’s frantic defense against Thanos in Infinity Gauntlet #3. When combined, Love and Hate create the being known as the Avatar.

While Mistress Love and Sire Hate have had few storylines throughout the history of Marvel Comics, many fans of the cosmic side of Marvel titles will doubtlessly recognize these two entities, who may have a future in the MCU. The ending of Thor: Love and Thunder seems to imply that Thor’s new daughter, Love, might be the cosmic Mistress Love after all, indicating the arrival of future primordial beings in the franchise.

Galactus is the most famous member of the cosmic beings in the Marvel Universe. Formerly known as Galan in a universe predating the current 616 timeline, Galactus is commonly portrayed as a villain, who consumes the energies of entire planets. Galactus made his first appearance in Fantastic Four #48 in 1965.

Galactus is one of the more active members of the cosmic brotherhood, who even took action when Thanos first gathered the Infinity Stones. As such, he has remained a popular character throughout the history of Marvel Comics, making him a popular choice among Marvel fans for the main antagonist of the upcoming Fantastic Four film.

The Living Tribunal is of paramount importance in the Marvel Universe. The being made its first appearance in Strange Tales #157 as the living embodiment of multiversal law. The Living Tribunal famously has three faces, each of which represents one aspect of his personality: equity, necessity, and revenge, the latter two are in opposition to each other, with the center face mediating until an agreement is made whenever he may sit in judgment.

The One-Above-All is the Marvel Universe’s closest representative of God, existing outside the Multiverse itself while ruling over it through the help of the Living Tribunal, which acts as One-Above-All’s mouthpiece. This being rarely appears in Marvel Comics, though it has shown up sporadically over the years, beginning with Fantastic Four #511 in 2004.

When depicted, One-Above-All is often shown to have a deeply scarred face, as seen when it appears to Peter Parker in the build-up to the infamous One More Day storyline. As the supreme ruler of the Multiverse and the progenitor of life itself, One-Above-All is considered to be the most powerful being to ever exist in the Marvel Universe.

SnowRunner Will Arrive Tomorrow On The Xbox Game Pass