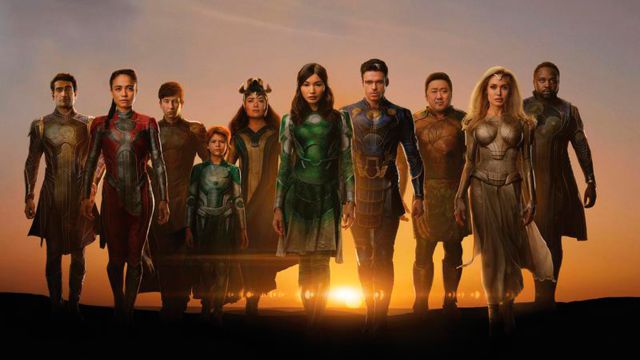 Eternals: The upcoming Marvel Studios film is seen in new images and receives its age rating ahead of its theatrical release on November 5. Eternals, the next Marvel Studios film that will hit theaters on November 5, 2021, shares a handful of new images from Total Film magazine. In addition, and as a prelude to its arrival in theaters, the new film by the Oscar-winning Chloé Zhao has received its usual age rating, maintaining the recommendation for all audiences like the rest of the UCM films, that is, PG -13.

New images of the Eternals from Marvel Studios

Thus, in the new images of Eternals we can see some of its protagonists in previously unpublished stills, including the director directing the actor Richard Madden in his role as Ikaris in the middle of the filming set. In other snapshots we see other cast figures such as Gemma Chan, Kumail Nanjiani, Lia McHugh or Salma Hayek.

On the other hand, Eternals has received the PG-13 age rating, as is the case with the rest of the Marvel Studios films. Of course, the description of said rating adds an unpublished detail in the UCM regarding sexuality: “Classified PG-13 for violence and fantasy action, some language and brief sexuality”, we can read on the official Film Ratings page, adding the alternative title The Eternals.

Recall that the wide cast of Eternals includes names such as Richard Madden as the almighty Ikaris, Gemma Chan as Sersi, lover of humanity, Kumail Nanjiani as Kingo, the cosmic powerhouse, Lauren Ridloff as the super-fast Makkari, Brian Tyree Henry as the inventor Phastos. Salma Hayek as the wise and spiritual leader Ajak, Lia McHugh as the eternally young Sprite, Don Lee as the mighty Gilgamesh, Barry Keoghan as the distant and lonely Druig and Angelina Jolie as the fierce warrior Thena. Kit Harington plays Dane Whitman.

Eternals opens in theaters on November 5, 2021.

Returning to Windows 10 after installing Windows 11 is possible with...