Home Tech An Espresso Machine Inspired by Porsche 911 Made 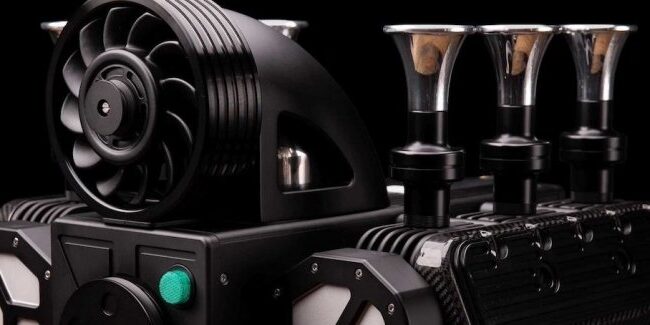 As one of the legendary names in automotive history, Porsche has succeeded in this way in a very different way. South African Super Veloce company designed a new espresso machine inspired by the Porsche 911 engine.

The breadth of the history of the automobile industry in the world is known to all of us. Porsche, based in Germany, is also known as the architect of cars that decorate the dreams of many sports car enthusiasts with its powerful engines and original designs. This time, however, this radical name came up with a completely different reminder than we are used to and it seems that it will enter our kitchen as such. Designing kitchen products based in South Africa, Super Veloce has designed an espresso machine with the inspiration from the Porsche 911 engine.

The company, which is based on hand workmanship, has succeeded in making a machine that looks quite beautiful by blending Porsche’s legendary engine with the kitchen. Super Veloce, who is known for using the automotive theme in his works and designing such products, named this newest model Espresso Veloce RS Black Edition.

Designed using high-end materials
The company did not forget to share a long promotional article about this new product. Emphasizing in the article that the materials used are stainless steel, aluminum alloy, titanium and carbon fiber, Super Veloce has managed to create a smile on the face of the design enthusiasts with some small details. According to the company, the machine was inspired by the Porsche engine used in the 933 series, and only 933 were produced. Besides, let’s add that this valuable machine weighs approximately 22 kg.

You have guessed that the price of the machine is somewhat expensive, both due to the brand it inspires, as well as its craftsmanship and quality materials used. It is also announced that 933 espresso machines will be 11 thousand dollars. We think that most of us will only be able to look at this piece, which can only take its place in the kitchen of a few people.

How to make A Kindle Amazon Show A Book Cover On...