Home Entertainment ESO: High Isle — how to get a left-handed Aegis belt 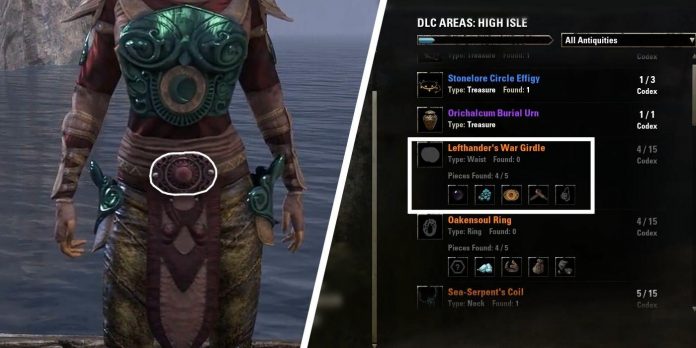 The Lefty Patronage Belt is a separate set of mythical armor with a medium waist in Elder Scrolls Online: High Isle, which is of great value for tank classes and styles of play in combat. This piece of mythical equipment is filled with enchantments that significantly increase maximum endurance. In addition, it slightly reduces the Endurance costs of rolling and sprinting. As for the unique mythical passive skill of the Left-Handed Aegis Belt in Elder Scrolls Online, Roll Dodge does not dodge the attack, but instead creates a shield around the player that absorbs up to 20,990 units of damage within 1 second. Keep in mind that the “Fighting Spirit” buff does not affect the belt damage shield.

Mythical objects are divided into five fragments, each of which requires a clue of the “Master” difficulty level to detect. Similarly, to unlock the Left-Handed Aegis Belt in Elder Scrolls Online: High Isle, adventurers need to find five main clues. In addition, players must have at least level 7 in Observation and have the passive skill Antiquarian Insight IV to predict the main clues for the mythical. Naturally, this precondition means that ESO fans will need access to the Greymoor extension, since it opens the mandatory branch of Scrying skills.

Related: Elder Scrolls Online: The Location of Every Volcanic Vent on High Isle

Five leashes for the left—handed aegis belt are the great onyx hattu, chrysocolla totambu, a gilded disk, an asp leather strap and a stainless steel clasp. To obtain these treasure-like items in ESO: High Isle, players must perform actions such as completing quests, killing bosses in ESO, farming mobs, searching for chests, and interacting with environmental objects.

Below are all the clues of the left-handed Aegis belt in Elder Scrolls Online: High Isle, including locations and a brief description of how they can be obtained:

Grand Hattu Onyx: Location – Any Zone | Method: This lead can appear in the reward chest as a random trophy for any daily crafting order. Chrysocolla Totambu: Location — Summerset | Method: Take part in cleaning one of the six geysers of the Abyss on the map. Lead could potentially fall out of Shell Trove, a reward chest issued after cleaning the geyser. Gilded Disc: Location — Amenos, High Island | Method: Kill Matron Hadolid and Consort Hadolid, the world boss of Mornard Falls in the northeastern part of the island. ASP Leather Strap: Location – High Island | Method: Grow small sea snakes found on High Island. Their habitat is often located near the water in ESO: High Isle. Singersteel Clasp: Location — Alik’r Desert | Method: Search for treasure chests that appear throughout the zone to eventually find a clue.