Home Sport The most epic Nadal saves a match ball and continues with options... 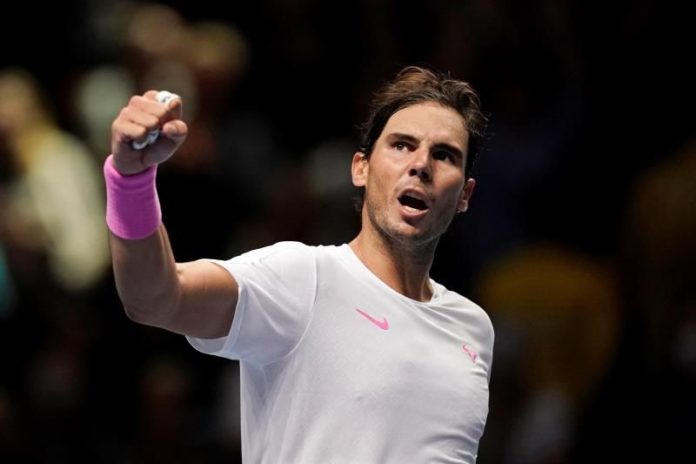 In a repeat of the last US Open final, and in the Andre Agassi group of the ATP Finals in London, Rafael Nadal saved a match ball and grabbed the track as never before to beat the Russian Daniil Medvedev 6- 7 (3), 6-3, and 7-6 (4) in two hours and 46 minutes, so that the Spaniard still has a chance of achieving the semifinals.

Nadal was 5-1 down in the third set, but in an extraordinary reaction he linked five consecutive games, inflamed the public with his delivery and ended up unraveling the Russian in the final tiebreaker, in one of the best matches of the tournament, similar intensity at which Austrian Dominic Thiem and Serbian Novak Djokovic disputed last night.

Tonight’s meeting (21.00 CET) between German Alexander Zverev and Greek Stefanos Tsitsipas, both with one victory each, will be crucial to know how Nadal’s future in the tournament follows, and in his fight to end the season as number one. All three have won a match, and Medvevev is the only one in that group who has not yet achieved a win during the week.

The match faced two players in search of trust. Medvedev, debutante and touched after a couple of defeats after an extraordinary session in which he has reached the fourth world position, and Nadal, champion of two greats in this course, finalist in London and trying to take the form after the scare of the relaxation in the abdominal in Paris.

But both pursued the same goal, continue their aspirations to achieve the semifinals, after losing in their first meetings, Nadal against Zverev, and Medvedev with Tsitsipas.

As in the previous match against the German, where he received 11 direct serves and did not have a single breakage option, Nadal met another great server. Daniil placed 21 of Manacor direct, and maintained during the first set his service unapproachable. Rafa granted an opportunity but saved it.

And so, everything was decided in the tiebreaker, where Nadal started giving up the first point, and although he recovered it later, the Russian service marked the differences. Two consecutive “robberies” made the champion this year in Sofia, and St. Petersburg, and the 1,000 Masters of Cincinnati and Shanghai, took the first quarter in 53 minutes.