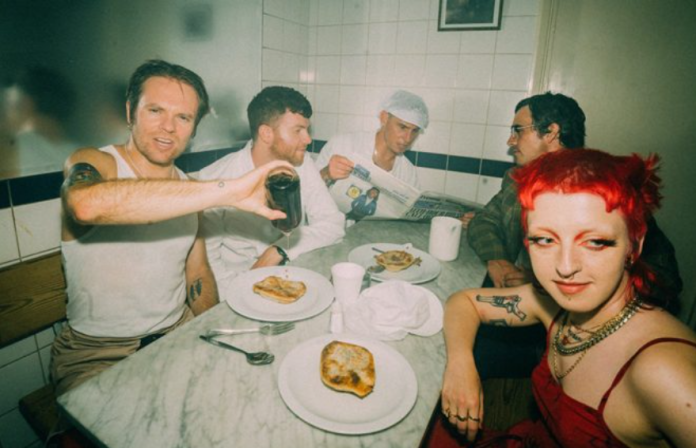 Enter Shikari shared a new single called “Bull” — you can listen to it below.

The song featuring Cody Frost marks the band’s second collaboration this year after the summer track “The Void Stares Back” with Wargasm.

“We’ve known Cody for many years and consider them a real part of the inner Shikari family,” explained frontman Rowe Reynolds. “We always knew they were great talents, and it was great to see them start to rise and find their voice.”

Reynolds went on to say that he “immediately” thought of Frost when writing the chorus for “Bull,” and praised the singer for “incredible dynamics” and “tremendous strength.”

Regarding the meaning of the track, Reynolds said, “It seems like some people show up in your life, do a lot of damage to it, and then run away again unharmed and unperturbed. Whether it’s stalkers or bullies, social media trolls or thoughtless romantic partners, this song is about those who damage your mental health, your self-esteem and even your very personality.”

Frost added: “I went through a hard breakup and lost everything, so when Rory [Clewlow, guitarist] texted me asking if I wanted to be on the Shikari track, I lost my mind! I’ve been a big fan of Enter Shikari since I was 15, I even have a tattoo with the name of my favorite track on my palms.

“When I got the news, I was sitting in my room for hours, and the lyrics just poured out, I went into the studio with Dan [Weller], who worked with me on my own music, as well as on some Shikari songs, to record vocals while the band was listening!”

They concluded: “Shooting the video was a dream, my favorite musicians treated me to pies!!! It was surreal and the concept was so funny that I just know that Shikari fans will appreciate it.” Tune in higher.

Enter Shikari’s sixth and final studio album “Nothing Is True & Everything Is Possible” was released in April 2020. “The Void Stares Back” is said to open a “new beginning” for Reynolds and company, but the band is yet to announce their next album.

Speaking to NME at the Reading Festival 2022, Reynolds spoke about the new music of Enter Shikari.

“We’ve been writing all summer, just trying to get things done and agree on a timeline for how we’re going to move forward, but [‘The Void…’] is the first new track in the last few years.” he explained.

“I couldn’t write about blocking at all, so this is the first sentence for this entire period.”

Back in September, Rowe Reynolds joined forces with You Me At Six for their song No Future? Yes, that’s right.’

Knights of Honor 2: Sovereign Gameplay presented at THE Nordic Showcase