Home Entertainment “Enola can do anything to be taken seriously” — Millie Bobby Brown... 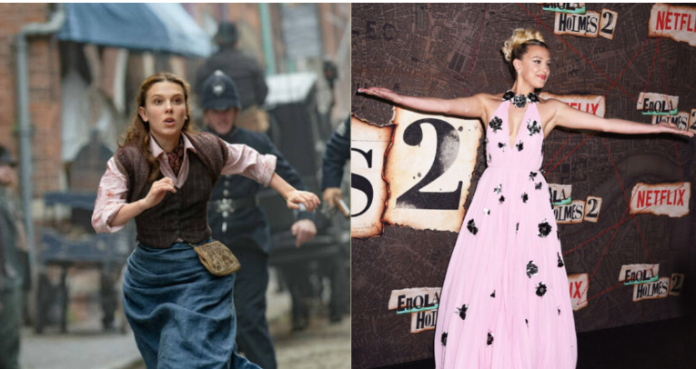 The role in “Stranger Things” brought Millie Bobby Brown fame only at the age of 12. However, her achievement in the role of Enola Holmes performed by Nancy Springer gave this young star a new image. This film gave her the opportunity to become a producer along with acting. The young actress has learned a lot by starring in this film.

Brown played a smart and daring detective struggling with the restrictive conventions of Victorian society, but this time they portrayed a different theme related to deadly adventures and conspiracy. And during this journey, the British actress found a connection with this energetic character, as she recently spoke about the striking similarities she sees between her and Enola Holmes.

Millie Bobby Brown has a lot in common with Enola Holmes.

On November 10, Millie Bobby Brown met with the SAG-AFTRA Foundation to talk about her character in the movie “Enola Holmes 2”. During the conversation, she talked about how she feels connected to the character of Enola. She said they both had to survive in a place that didn’t suit them.

According to her, this character has all her good and bad qualities. Although there is one difference: Brown has to be thoughtful about some things since she works in Hollywood.

“We persistently overcome what is bad or good, and Enola does everything to be taken seriously,” the Emmy—nominated actor explained.

Brown tells how she grew up watching American stars like Selena Gomez and Miley Cyrus all her childhood, but she never had anyone who sounded like her, which didn’t lead to a connection with these characters. So, with Enola, the actress added pieces of herself to the image, which ultimately became an amazing experience for the actress. In this way, viewers can see the love shining through the character in both films.

Enola Holmes 2 is currently trending on Netflix, and if you haven’t watched it yet, check it out. Also, stay tuned to get more news about your favorite celebrities.

Harry Potter And The Philosopher’s Stone Returns To The Cinema In...

“Modern Warfare 2”, Captain Price, “Really Insisted” That He Become A...